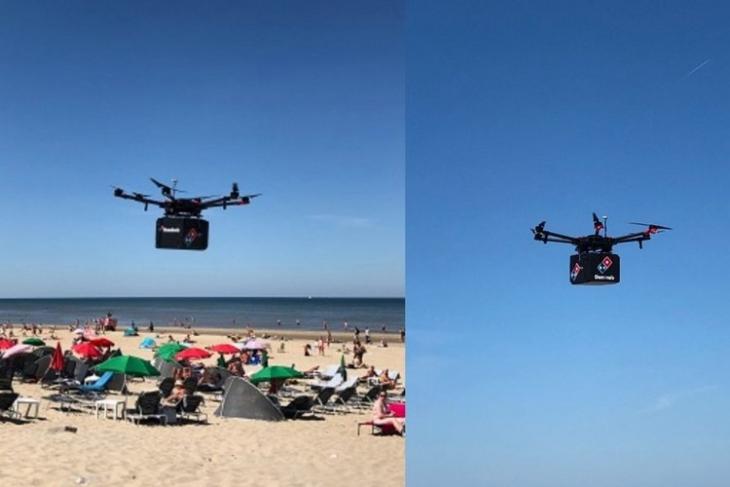 Since the evolution of drones, we have seen the flying machines take on a lot of jobs to ease human efforts. From disinfecting areas to delivering emergency supplies to hospitals and from monitoring unattainable spaces to even walking dogs, drones have proved to be useful in varied sectors. Now, global pizza-makers, Dominos is using these flying devices to deliver hot and fresh pizzas to customers.

Dominos decided to take their delivery service a notch up by introducing drone delivery. According to a recent report, Dominos Pizza successfully drone-delivered some freshly baked, hot and cheesy pizzas to customers on a beach in Zandvoort, which is located on the coast of Amsterdam. However, it was just a test flight of the service as Dominos is aiming to make drone deliveries a legit option to deliver their consumables.

The company is already well known for their delivery and they surely didn’t need to work on it anymore. However, the idea of flying pizzas is deliciously insane and I ain’t gonna say no to that!

Moreover, this technique will enable them to reach places where it’s not really possible to deliver pizzas manually, such as on water or perhaps a dessert.

Now, the company is waiting for a green signal from the legislation even though the tech is ready. “When we can actually deliver with drones depends, among other things, on legislation,” a Domino’s spokesperson said.

Personally speaking, I dream about a day when we’ll be able to download food from the internet! Well, that sounds downright crazy, right? However, imagine a person saying “I dream of flying pizzas” a decade back. That would have sounded bonkers too. So yeah, I can still keep my hope alive, don’t you guys think? Let me know down in the comments.