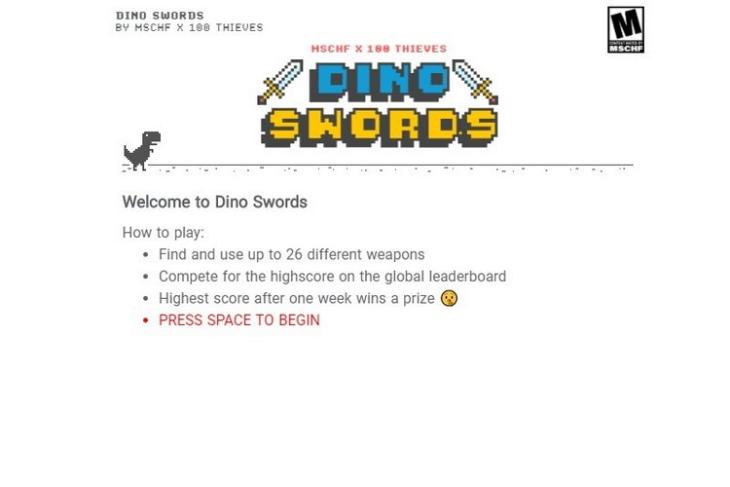 We have all played the “hidden” Dino game inside Google Chrome by now. We even saw a few developers recreate the game in 3D for players to enjoy running inside a colorful, three-dimensional environment. Now, we have “Dino Swords”, a modded version of Chrome’s T-Rex game which brings swords, shurikens, guns, and other weapons in the mix to tackle the cacti and the flying pterodactyls in the game.

Developed by the notorious website, MSCHF which brought us the unusual mystery box and the $3000 Nike shoes filled with Jesus’ holy water, the “Dino Swords” is a collaborative effort between the company and the gaming clan, 100Thieves. The organizations say that adding the mod to the game is “just making it truer to form”.

Chrome’s T-Rex Game with a Twist

Now, if you have played the classic game in Chrome, then you would know that the only thing you have to do to play the game is to press the spacebar to make the T-Rex jump over the obstacles. However, with this mod, players can collect power-ups which will be bound to various keys on your keyboard. So, after collecting the power-ups, players can press the assigned keys to use the weapons in the game.

The weapon arsenal for the pixelated T-Rex in this modded game is massive with weapons ranging from sledgehammers to even helicopters. However, amongst these weapons, there are some that inflict damage to the dino itself.

“’Dino Swords’ is our take on the classic Chrome dinosaur runner game, made extravagant with 26 weapons to help your runs. “Many of them pay homage to classic video game weapons, some of them are totally OP, and some are completely useless. There’s even a few easter eggs that are pretty hard to unlock.”, says Matthew Haag, the owner of the gaming clan 100Thieves.

Now, if you are a fan of the classic easter-egg game in Chrome, I am sure you’ll love “Dino Swords”. You can check out the game on its website.

So, go on and create your high score in the game to show-off in the leaderboards which refresh hourly. Also, let us know about your thoughts on the game down in the comments.