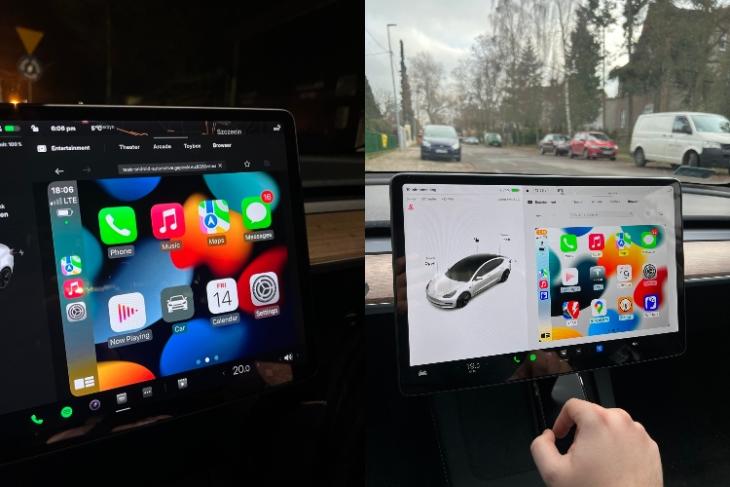 One of the biggest complaints of Tesla owners has been the lack of support for Apple’s CarPlay system. While Tesla cars support third-party streaming services Tidal and Spotify, they run on the company’s in-house in-car system that can apparently even run games like Cyberpunk 2077 and Witcher 3. However, a developer recently discovered a workaround that allowed him to run Apple’s in-car infotainment system in his Tesla car using merely a Raspberry Pi module.

In a series of tweets, Poland-based developer Michał Gapiński recently showcased Apple CarPlay running on his Tesla Model 3. He used a Raspberry Pi and the car’s browser to successfully run the CarPlay infotainment system on his Tesla’s display.

Gapiński used a Raspberry Pi module with support for LTE, a Wi-Fi access point, and a custom Android-based firmware to run CarPlay in his Tesla. He then connected the in-car browser to the Raspberry Pi module to display the CarPlay UI on the car’s screen.

Surprisingly, all the apps, including Apple Maps and Apple Music, were fully functional. The developer also showed that even the steering wheel buttons are functional as he could control the music playback in his car using the buttons. You can check it out in action in the tweet attached below.

In the above tweet, the developer states that he will now work to improve the Wi-Fi connection of the system to make it more refined. He recently tweeted that he is now using Apple Maps instead of Tesla maps for his navigation needs. So, it seems like the CarPlay system is running smoothly in his Tesla Model 3 as of now.

Gapiński also mentioned that he might release the firmware and hardware to run CarPlay in Tesla cars for the public. However, before that, he will keep testing the system to further refine it and make it stable. If that happens, it could soon become one of the coolest Raspberry Pi projects among Tesla enthusiasts.

What do you think about Gapiński’s workaround to get Apple’s CarPlay in Tesla? Would you buy the product if or when it is released in the market? Let us know your thoughts in the comments below.