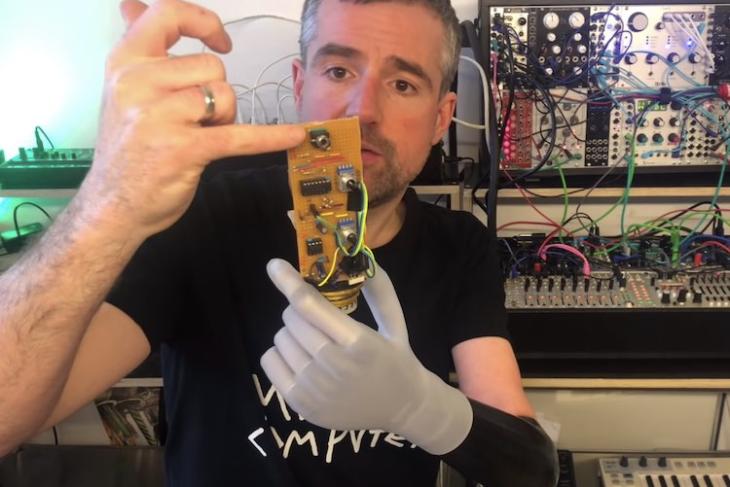 With all the developments in biological tech, prosthetic arms and legs are advanced products that are truly helping people around the world to walk without a natural leg or hold things without a natural arm. With a prosthetic arm since he was 3 months old, Bertolt Meyer, 42 now, has taken the prosthetic tech to a whole new level. He was born with a physical disability, but also with dreams of becoming a musician.

The current prosthetic arm that he wears is the high-tech “i-Limb” arm which is a myoelectric prosthesis that uses the electrical signals from his muscles to control the prosthetic hand. Now, Bertolt is a musician producing techno music using his modular synthesizer. Although he could grab and hold anything using the prosthetic arm, turning the tiny knobs of the synth fast and with precision is a thing that he cannot perform with that large artificial hand.

So to play his modular synth with the help of his prosthesis, he went ahead with a DIY project. This involved converting his prosthetic arm to a device that can connect to his synth and control the music with the help of the electrical signals from his muscles. Guess what? He converted his “i-Limb” into the “SynLimb”.

Now, developing a device like that is not as easy as it sounds. The first challenge that Meyer faced was understanding that the electrical signals that his muscles transmit are way too weak for the modular synth to pick up. To solve this problem, he needed a circuit that would amplify the signals from his muscles to a range which the modular synth can catch. He was no engineer or a circuit board designer who could make the necessary design. Then he realised that he already had a circuit board of that sort inside an analogue audio workstation – the Koma Electronik Field Kit. There was a section in that device that could take a voltage between 0-5 volts and can convert it into a signal that the synth can understand.

So, after telling Koma Electronik about his plan, Chrisi, who works with the company, designed him a custom circuit board that can be connected to the modular synthesizer. Bertolt’s husband made a 3D printed adapter that can attach to the prosthetic arm, in the place of the hand. So now, with the circuit board on top of the adapter and the adapter attached to Meyer’s prosthesis, he could connect his modular synth directly to his prosthetic arm.

Now the musician could play his modular synthesizer with the electrical signals that his residual muscles transmit. So, now he can play music just by thinking about it! How extraordinary is that?

Describing his experience, the mind musician said, “the thing is, like for me, it is such a natural thing to do that I really don’t have to think about it. I just do it. It is zero effort because I am so used to producing this muscle signal.”