We live in a world where cyber security has become as important as your personal security. Today, using an unprotected network is as bad as handing over the keys to your house to an unknown person. Anyone can snoop on your network and not only see what you are doing but also steal important information and password. The risk becomes exponential if you are using an open WiFi to connect to the internet. If you want to make sure that you are safe from cyber attacks, you need to make sure that you are using a VPN.

A VPN not only protects your network from unidentified prying eyes but also comes with various ancillary benefits. For example, you can use a VPN service to unblock streaming services or social media websites which are blocked in your country. You can use it to establish an encrypted connection so not even your ISP has any idea about your internet usage. While there are many VPN services on the market, when it comes to connection speeds and affordable rates, CyberGhost VPN is one of the best options out there. In this article, we are going to take a deep dive into CyberGhost VPN and see if it’s worth your time and money or not.

CyberGhhost VPN prides itself in providing one of the best encryption services any VPN offers on the market. CyberGhost’s servers are designed in a way that allows you to connect to any device in the most secure way possible. Even if you are using a public WiFi which is when you are completely exposed to attack, CyberGhost VPN secures your connection using an industry standard 256-bit AES encryption technology so that both your connection and sensitive details remain private.

No matter who much you try to protect your browsing history from companies like Google and Facebook, it’s of no use as your ISP already has access to all your browsing history and can sell it to any third-party service. CyberGhost VPN solves this problem by masking your IP address and switching it to a proxy IP on its server. Since the very same IP is shared with multiple users on the same server, it is next to impossible to track that IP back to you. What this means is that neither websites nor your ISP will be able to track your internet usage allowing you to use the internet anonymously.

Even if you use a VPN you are not totally anonymous as your VPN provider has access to your internet usage. Basically, while you have stopped your ISP from tracking you, you have handed your network data to yet another third-party company. That’s why CyberGhost VPN’s no logs policy is very important. CyberGhost VPN doesn’t keep any logs. It means that the company doesn’t track your internet usage and hence even CyberGhost’s employee cannot track you if they wanted.

CyberGhost VPN has over 3600 VPN servers in over 60 most popular countries and these numbers keep growing. This allows you to essentially use the internet anonymously by masking your IP from any of the above 60 countries. It also means that you will not have to suffer low connection speeds as there is always going to be a server that’s near to your country. The company is also not only partnering with reliable data centers but even building its own data centers which will improve this number even further.

Having VPN servers across 60 most popular countries also mean that you can access restricted content from those countries. For example, there are many shows on Netflix USA which are not available on Netflix India. Well, you can use the CyberGhost VPN to fool Netflix into thinking that you are in the US and access all those region-blocked content. 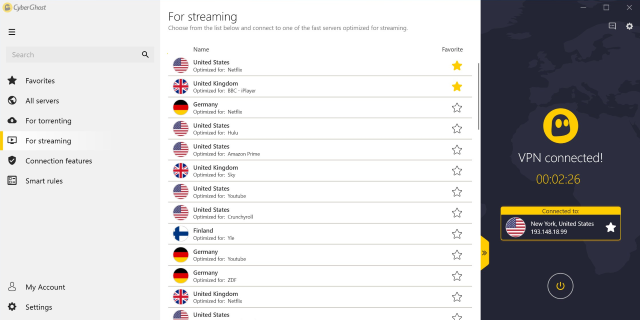 Another great thing about CyberGhost VPN is that it’s available for all the major platforms so once you buy its subscription, you can basically use it on any device of your choice. As of writing this article, you can use CyberGhost VPN on Mac, Windows, Linux, iOS, Android, Android TV, Amazon Fire TV, Google Chrome, and Mozilla Firefox. As you can see, no matter which device you own, you will be able to use CyberGhost VPN on it.

Apart from the above-mentioned main features, CyberGhost VPN also brings a ton of other features including ad-blocking, malicious content blocking, online tracking blocking, and more. One of my favorite features of CyberGhost VPN is its ability circumvent network filtering services that might be employed by your workplace or college. So, next time you have a little downtime and you want to binge “Stranger Things”, you don’t have to worry about your university’s content filter.

CyberGhost VPN is one of the easiest VPN services to use. You just install the app and hit the connect button start using the VPN. There is nothing to patch or configure ever. The only thing that you need to manually select is the country that you want to use internet from. Don’t believe me, take a look at the video below.

CyberGhost VPN is available to use on all your devices right now. All you need to do is buy its pro plan and you will be able to use it on seven devices simultaneously. The paid plan gives you access to unlimited bandwidth so you won’t have to suffer downgraded speed after reaching a consumption limit. Basically, once you buy it, there’s no cap on the amount of data or the speed of the connection. The pricing starts at $12.99/month, however, if you decide to pay for a yearly plan, it will only cost you $2.75/month. Not only that but you will also get 6 months of free usage. If you are still a little apprehensive, you should know that there’s a 45-day money back guarantee on this plan.

Access Secure Internet with No Geo Restriction with CyberGhost VPN