Note: All the Android Experiments are open-source and available for free.

Starting off with Wearabird, which is a fun Android experiment. Wearabird is an innovative game, where you have to fly as a bird. Yes, the game uses the sensors in an Android Wear smartwatch and requires you to flap your hands, like you are flying. In the game, you have to collect coins through the bird and while it might feel weird, flapping your hands, it should be a lot of fun, while also pertaining as an workout for your hands. Try it out!

Now, this one is straight from our favorite sci-fi movies. Smart Mirror is an Android Experiment that displays weather info, clock, news etc. on your mirror. To set this up, you will require a two-way mirror, a display panel, controller board and import the Smart Mirror project from Github into Android Studio, to create an APK file to run. You will also need a few Android APIs to add the weather info, clock etc. You can even display Google Now cards on the mirror. 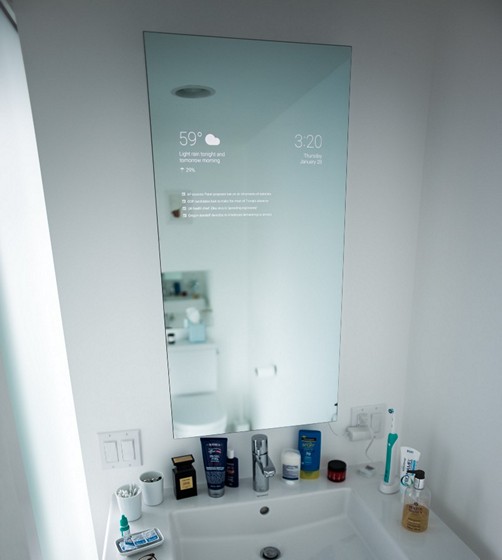 While this might seem too much work, if you manage to do it, you will have a great futuristic-looking mirror. You can check out this write up to know more details on how to create the Smart Mirror for your house.

As the name suggests, Hungermoji Notification Game is a cool game that takes place in the Android notification center. The game requires you to feed the emoji of your choice, while making sure to swipe away bombs that arrive as notifications. On the way, you can also collect bonus points. It’s a highly addictive and fun game, which you should definitely give a shot. Do note that the game works best on stock Android devices. 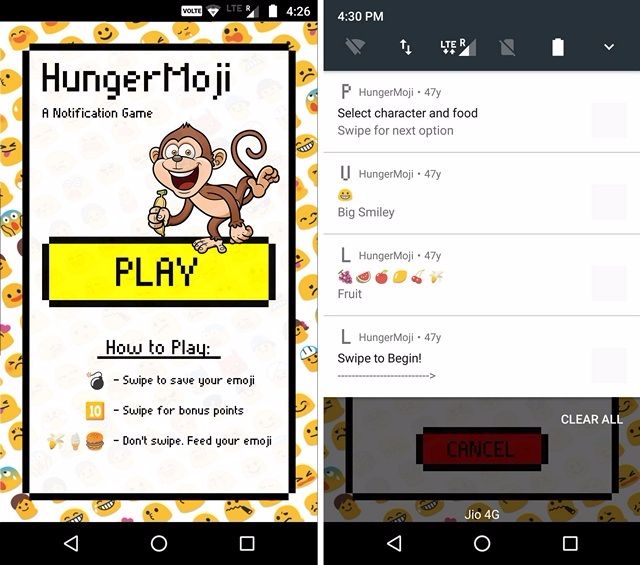 If you want a fun and simple way to capture 360-degree VR photos, then you should check out the Sprayscape Android Experiment from the Google Creative Lab. The app lets you just point and tap on the screen to capture or spray (as the app likes to call it) places, faces or anything else and create a cool-looking VR photo. Don’t go expecting 360-degree photos that you can capture with Photosphere or the Cardboard Camera app, as this is meant to be a more fun way of capturing VR photos. 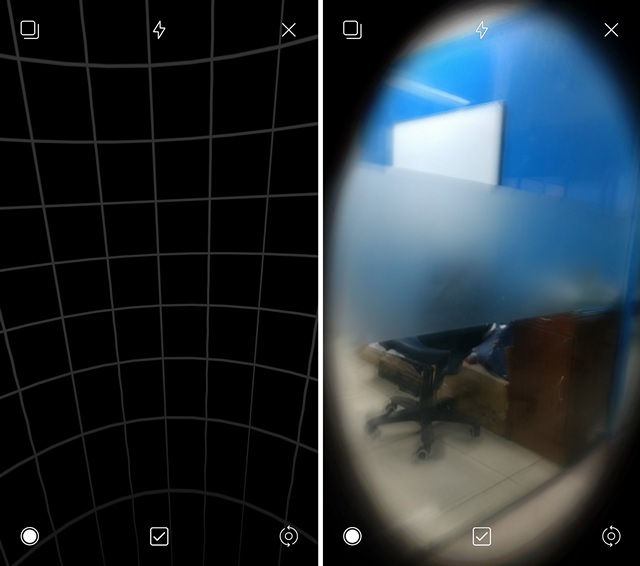 Ever wanted to translate your favorite fun emojis through your face? Well, the Giant Emoji Android Experiment lets you do exactly that. The app detects facial expressions and analyzes the emotions in your face from the Android app’s camera to bring you the emoji on another display running the web app. Plus, these emojis change in real time based on your facial expression. You can check out the experiment’s Android app and web app that you will require to try it out.

There’s no dearth of launcher apps on the Play Store and there are various unique apps that let you launch apps quickly. So, how is the Lens Launcher Android Experiment different, right? The Lens Launcher shows all your apps in equispaced grid and lets you launch apps using the fisheye lens to zoom, pan and launch. You can even customize the launcher’s icon size, distortion factor, scale factor, animation time, the apps you see, background and more. Overall, it’s definitely a cool and efficient way to launch apps. 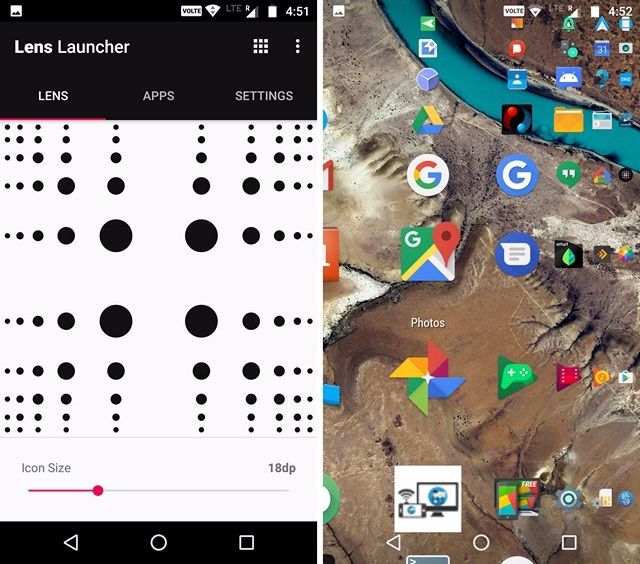 The 3D Controller Android Experiment is one of the 2016 Android Experiments I/O Challenge Winners. The app lets you use your Android device as a 3D controller. You can just cast your screen and then let the app detect your device’s orientation in 3D space. It also detects where the device is pointing at and the way it is rotated, which is pretty cool. The app includes 3 demos to show off its 3D controlling capabilities, so you must try it out. 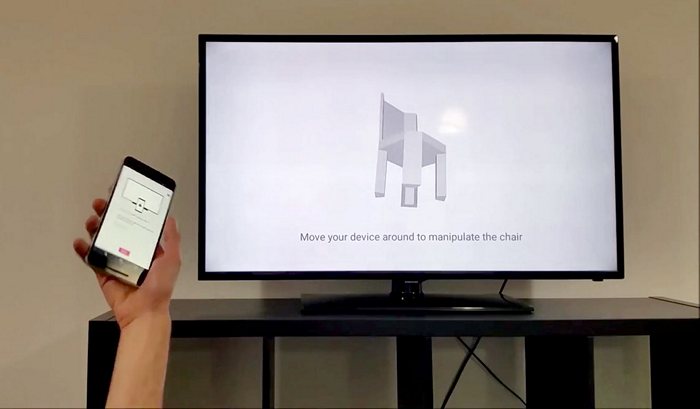 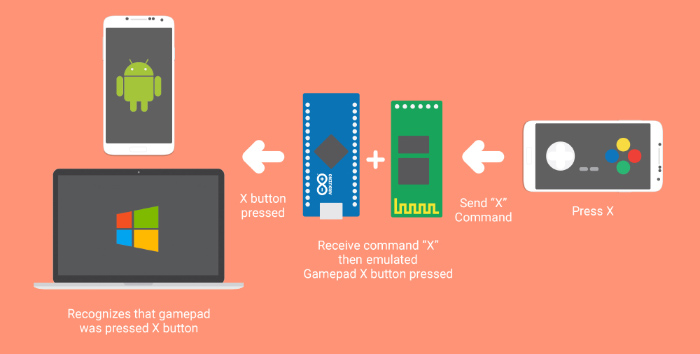 Another winner of the 2016 Android Experiments I/O Challenge, the Autonomous Android Vehicle lets you create a robot, which can track and follow objects of a specified color, while making sure to avoid any obstacles in the path. Sounds cool, right? The experiment uses Android SDK-23, OpenCV, a Nexus 5x, IOIO-OTG and IR sensors to create the robot. You can check out the project’s Github page to know how you can create the Autonomous Android Vehicle for yourself.

Lip Swap is one of the fun Android Experiments that you can try. The app lets you swap elements from a photo with a recorded video. So, as the name implies, you can swap a person’s lips in a static photo with the lips of a person talking. In fact, you can swap anything in a photo with a video and create a lot of funny videos with the app. 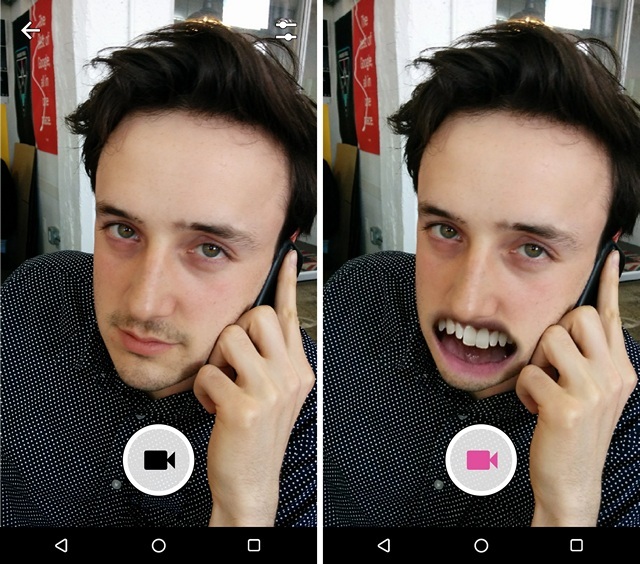 Want to display a special message in a geeky way? Well, the Tin Can Android Experiment is just for you. The app uses Nearby API, Firebase to display a message through multiple Android devices. As of now, the app supports up to 11 devices and uses the publisher/subscriber method to display the message, which means the first device displays a message and the second device receives it. The process is repeated till the full message is displayed. However, the app only works manually but the developer is working to automate things. 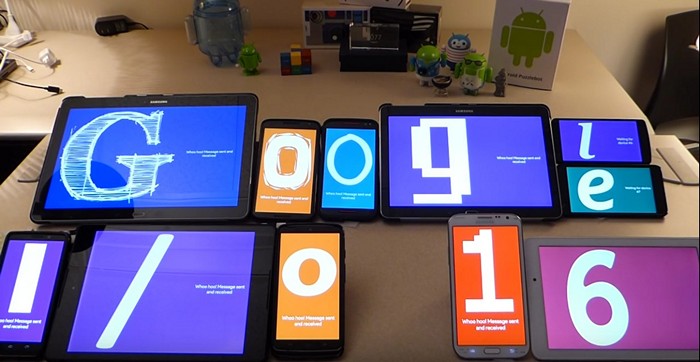 Some Creative Android Experiments You Can Try

There are a lot of other Android Experiments that you can try but if you are looking for the most creative ones, the aforemmentioned Android Experiments are the ones to check out. Sure, some of them require you to go through some hassle but the results can be pretty amazing. So, check them out and let us know your favorite Android experiment in the comments section below.