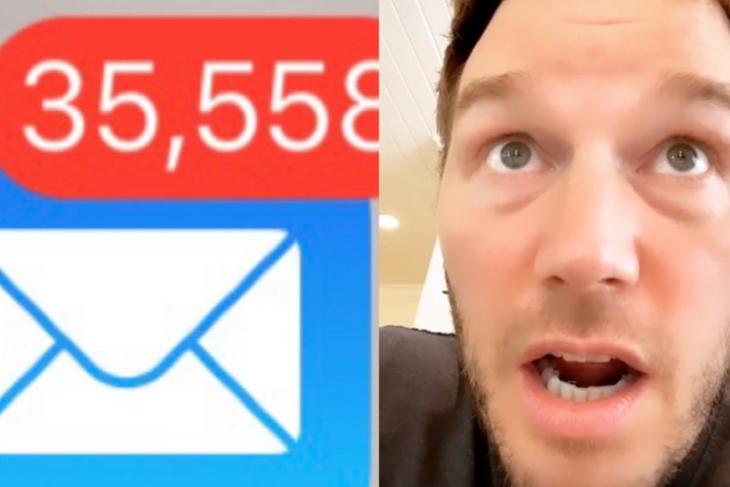 In a hilarious turn of event, actor Chriss Pratt was forced to begin a new email journey when he accidentally wiped out his entire inbox. After his son was “shocked” looking at the number of unread emails, the Jurrasic World and Guardians of the Galaxy star wanted to declutter his inbox. However, instead of cleaning his mail log, Pratt ended up deleting 51,000 of his emails!

Pratt shared a video on Instagram talking about this and he said, “So, yesterday my son was playing with my phone and he gasped in shock looking at the number of unread emails that I had.”.

Apparently, Chris is one of those people who sign up for any random online thing they get their hands on. So, his mail log was cluttered with junk and (maybe) promotional emails like the ones we get from companies.

“Yeah, I get it, it’s mostly junk. See, I sign up for everything…I am one of those idiots who will like, say an IQ test. When they’re like ‘Wanna take an IQ test? Give me your email’ and then I do [give email] which proves my IQ is about 7.”, said Pratt.

The actor then promised those fans whose emails he didn’t reply to that he will slowly clear-up his mail log and reply to the emails. His target was to check a thousand emails per day and get that number down to zero by the next month.

However, he tried deleting “anything unread” and accidentally deleted the entire folder, which had over 51,000 emails of the actor! You can check out the video posted on Instagram right below.

Now, as a tech guy If I look at it, it’s not as bad as it looks. However, his real-time reaction was hilarious and quite entertaining. Well, after all, this is a kind of mistake we can always expect from Mr. Star Lord!

After the news broke, many fans have taken to twitter to share their number of unread emails. Now, it is quite fascinating to see people with over 177,777 unread emails. And here Jack was exaggerating for a mere 35,000 emails.

However, for Chriss Pratt fans, this is the chance. If you were thinking of sending an email to the star but was skeptical about it cause you thought, “What’s the point? Its gonna get lost in the millions of emails anyway”. Now is the time to sit and type that one out. Who knows? Yours might be first in his inbox now. Literally!
You Might Like
Internet

11 Great Outlook 2016 Features You Should Know

How To Send Anonymous Emails

Life of An Email, After It is Sent (Stats)