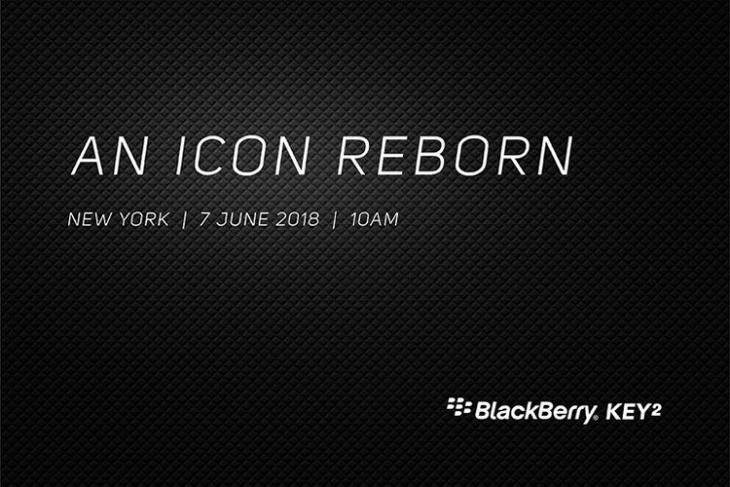 Canadian tech firm, BlackBerry (formerly ‘Research in Motion’), may have put its smartphone business on the back-burner, concentrating instead on the more profitable IT services sector, but the company does continue to release the odd smartphone from time to time, like the KEYone that was announced in February 2017 and went on sale a few months later.

Now, the company is apparently ready to launch an all-new smartphone, with the official BlackBerry Mobile Twitter account announcing that the BlackBerry KEY2 will be launched June 7th in New York City. The device is expected to be the successor to the BlackBerry KEYone that was released last year to a generally-positive response from the media and consumers alike.

The BlackBerry KEY2 was recently certified by Chinese regulator, TENAA, revealing that it will ship with the trademark physical QWERTY keypad that BlackBerry aficionados just simply cannot get enough of. Rest of the tech specs include a 4.5-inch LCD screen (1,620×1,080 resolution), 6GB of RAM, 64GB of expandable storage, a 3,360mAh battery and a fingerprint scanner.

The device will also ship with Android 8.1 Oreo out-of-the-box, but there’s no word on the processing chipset just yet. However, given that its predecessor was powered by the Snapdragon 625, it won’t be a massive surprise if the new handset also comes with a newer and faster 600-series Snapdragon ship under the hood.

It is worth noting, though, the all BlackBerry-branded smartphones these days are developed, manufactured and marketed by Chinese tech company TCL Communications, as part of an agreement signed by the two companies a couple of years ago. Blackberry, on its part, continues to develop security and software solutions for these devices and also provides regular Android security updates.