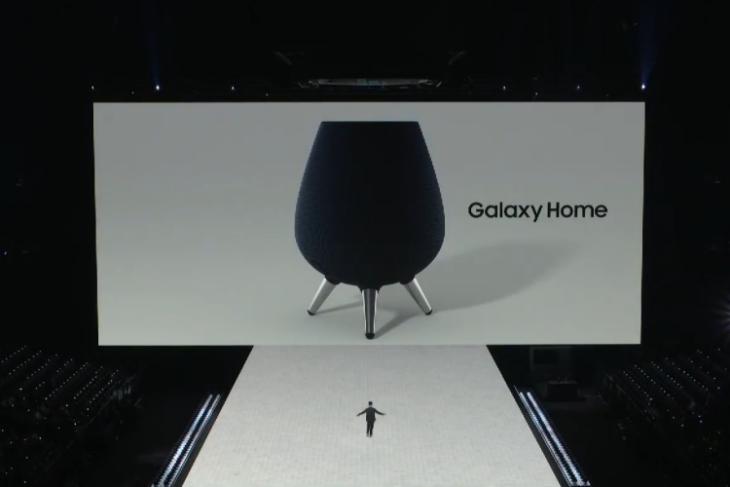 Exactly a year after Samsung originally announced the Galaxy Home smart speaker as a potential competitor to the Google Home, the company says it is still working on it to optimize and fine-tune some of the user-experiences before launch. In an e-mail to The Verge, a Samsung spokesperson said: “We’re continuing to refine and enhance the Galaxy Home prior to launch, and look forward to sharing more with Galaxy fans soon”.

The device, which was unveiled last August with Samsung’s Bixby voice assistant on-board, was originally expected to launch last April before the ETA was pushed back to the current quarter. It isn’t immediately clear if the company will be able to meet that self-imposed deadline, but given that the project is still alive, it won’t be a massive surprise if we at least get more info about the device sooner rather than later.

When demoed last year, the Galaxy Home included 6 speakers, a subwoofer and 8 microphones with far-field voice recognition to detect voice input with the hotword ‘Hi Bixby’. It also stood out from the Google Home, the Amazon Echo and the Apple HomePod in terms of design, thanks to 3 metal legs that the company said would help minimize sound distortion.

The original Galaxy Home was tuned by AKG and came with a plethora of features from Samsung’s subsidiary, Harman. It included a natural sound processing technology that offered what the company claimed was a fuller, surround sound experience and Soundsteer to detect the listener’s location to optimize the audio experience.