Fallout 4 is an action-adventure game set in a post-apocalyptic future with first and third person shooting and combat involving explosives, guns, swords and many other things that you can find. The game is immensely fun and entertaining, but this fun wears down when you have to do the same tasks over and over again. Well, no more because you can actually add flair to the game by using different mods. These mods add new features, items, or abilities to the game and give it an all new style. So, if you’re looking for some cool Fallout 4 mods, here they are: 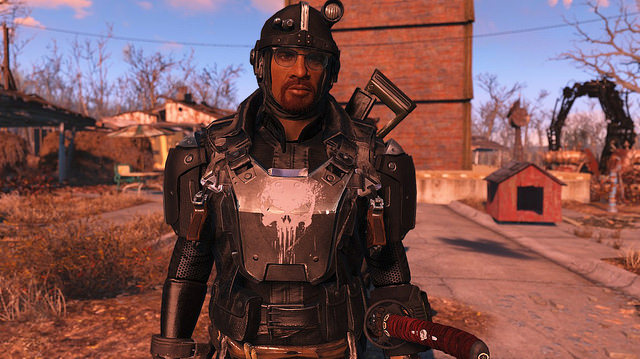 The Armorsmith mod for Fallout 4 is pretty great, since it allows the player to equip any weapon and outfit, to give them a better chance of survival in the open-world wilderness. This mod allows you to equip different powerful weapons to obliterate your enemies and also lets you wear cool outfits to show off your sense of style. The player can wear a gas mask and a bandana, along with a helmet in order to make their character much cooler, while also making it stronger for battles against tougher enemies. The Armorsmith mod is so much fun because players can try so many different outfits as well as different types of armor. 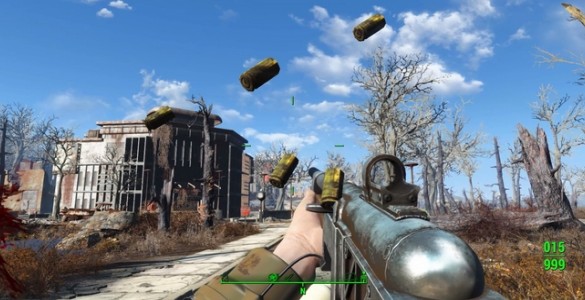 The Bullet Time mod allows a player to slow down the time while shooting at the enemy, but beware! You need to have some sort of shooting practice or excellent skills in order to kill enemies during slow motion mode. This is similar to the bullet time technology used in Max Payne games. The time slows down completely and you get to choose your targets precisely and take them out in single shots. It somehow ramps up the challenge since the player has to be precise with his aim now. This mod makes things a bit more climactic and players get to enjoy some intense action sequences during combat. 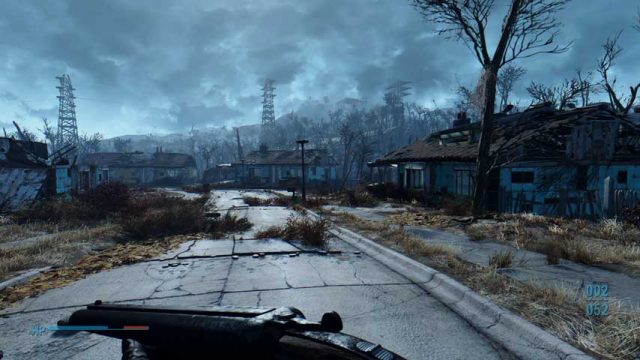 This mod allows the player to automatically lower the weapon when the character in the game is either running or walking. It lowers the weapon when the player is simply moving, instead of showing a big gun on the screen, which blocks the view. This mod brings the ability to enjoy the visuals of the game without blocking the view with a giant weapon. If the equipped weapon feels like a distraction or obstruction during gameplay, this mod will definitely take care of it. 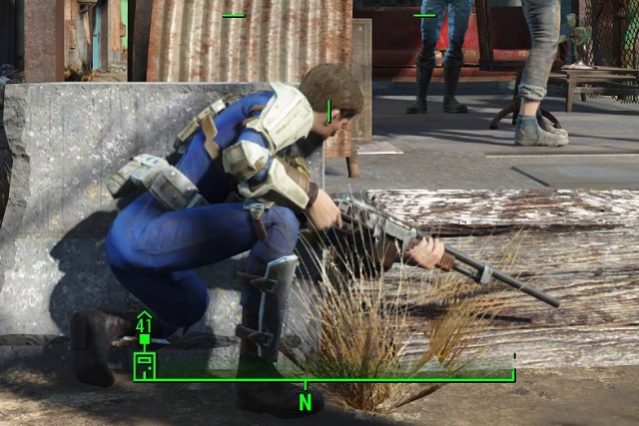 This mod allows the player to take cover behind any object in the game, to make sure they lose minimum health and also lets players eliminate enemies quickly from the cover. It allows the player to lean and shoot, while quickly hiding in the cover to give them a much better tactical position during combat and firefights. If you are mostly getting into firefights and combats in Fallout 4, then you need this mod to gain an upper hand over your enemies and utilize perfect covers to your advantage. 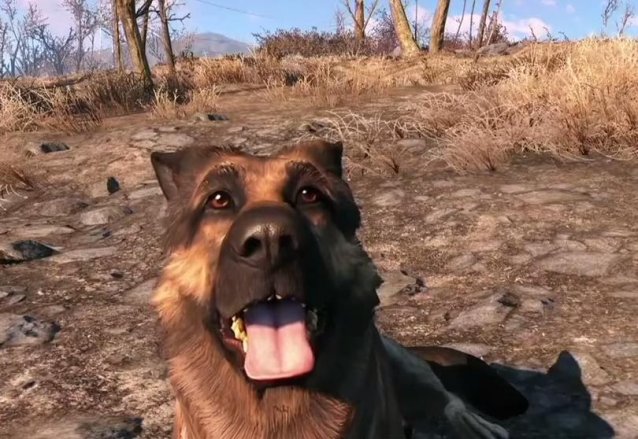 This is one of the most amusing mods for Fallout 4. It lets you play as a dog and roam the open world like a canine. Being a dog, you can recruit other canine companions and embark on a perfect adventure, you can even enjoy dog treats along the way. Although you can’t use any weapons or tools but you can recruit other dogs to join you in your insane apocalyptic adventure. Walking on four legs instead of two is a bit more fun in the game and quite amusing too. This mod allows you to enjoy the game to its fullest while playing as the happiest animal in the world. 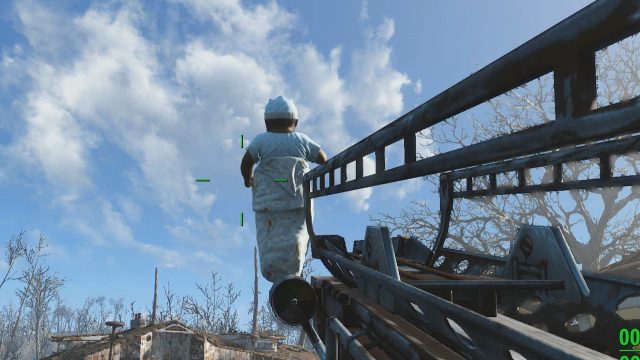 This mod replaces the nuke ammunition of the fat man missile launcher and replaces it with babies as ammunition. This is just a psychotic approach to fun. If you are someone who likes Joker more than Batman, this mod is perfect for you. Shooting babies instead of a nuke warhead is quite funny and will keep you entertained for hours. Firing the launcher deploys a baby towards the positioned target and blows everything to bits. Baby in a launcher that destroys objects as well as enemies seems quite violent and gory, however, people seem to love this bizarre idea. 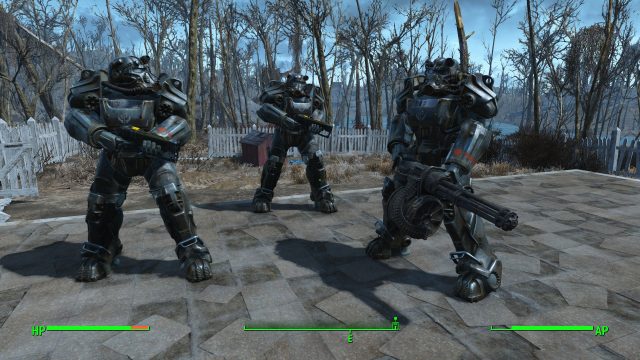 When things get a bit too aggressive, players always need backup and this mod allows them to call their alliance as a fire team for support. It allows the player to summon an individual or a group of minutemen troops, to aid them in firefights and battles against the enemy. Having a backup is always essential instead of trying to eliminate a tougher enemy all alone. The Brotherhood mod gives the players a quick way to call their allied factions to eliminate the threat once and for all. 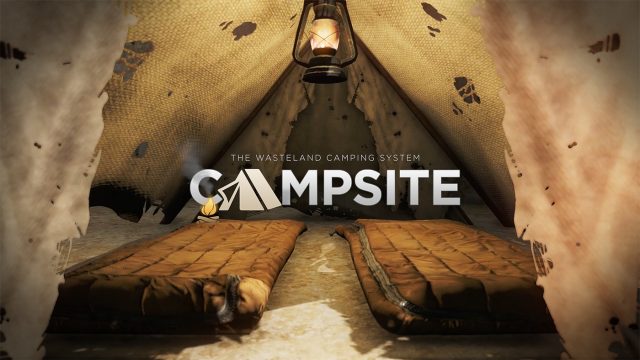 The Campsite mod allows players to set camp anywhere, in order to give their character a much-needed rest. Things that you normally do at a campsite like resting, cooking food, setting up a camp and a campfire can all be done, within the game. This mod allows the player to sleep in a comfortable sleeping bag, start a campfire, and cook wild meals to survive. Instead of trying to find safe areas for shelter and food, this mod lets players build one for themselves. The mod gives you a chance at survival, but you need camping skills to survive. 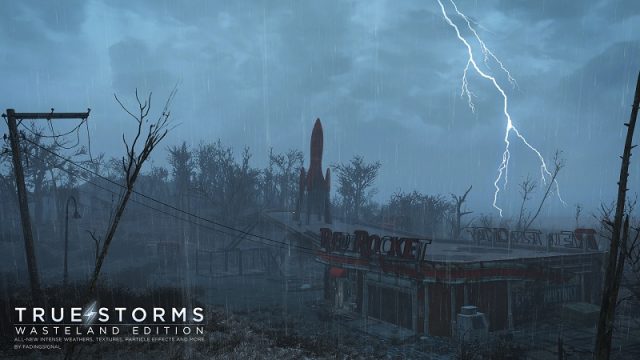 If you love to walk around during heavy rainstorms then this mod will make you happy. This mods lets players make the rainstorms in the game look very realistic and intense. It enhances the graphical performance of the game, specially during rainstorms. It improves the overall rainstorm visuals as well textures. After this mod is applied, it adds intense visuals in the game during heavy rain, dust, and also includes more than 20 different thunder sounds to give you the real feeling. 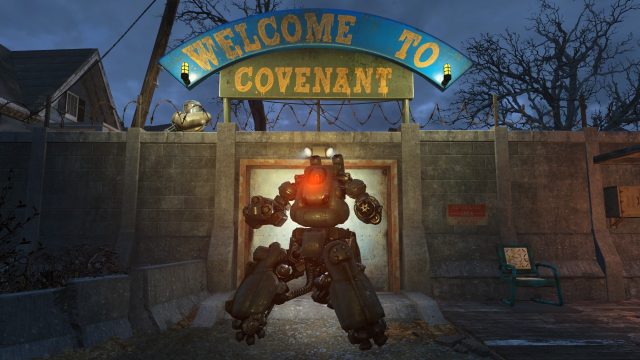 Who doesn’t like giant robots guarding their personal space? That’s rhetorical because everyone would love to have cool robots guard their homes and protect their lives from threats. Well, the Robot Home Defence mod brings exactly that! It lets players add powerful robots to defend their territories and aid them in combat against incoming threats. Adding robots for protection will allow the players to defend their settlements, while guarding the resources against the enemies. Having a strong defence is the main concern for a player in Fallout 4 and this mod allows the set up of a personal robot army in order to protect the player and his settlements. 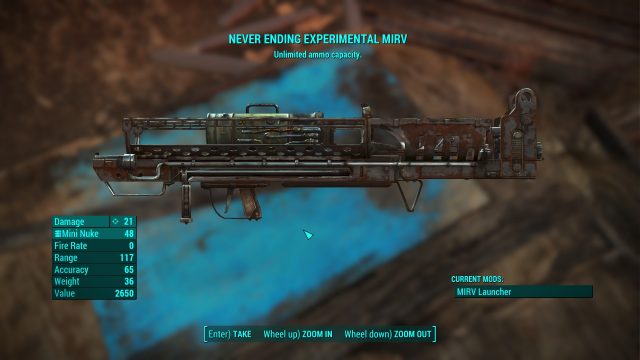 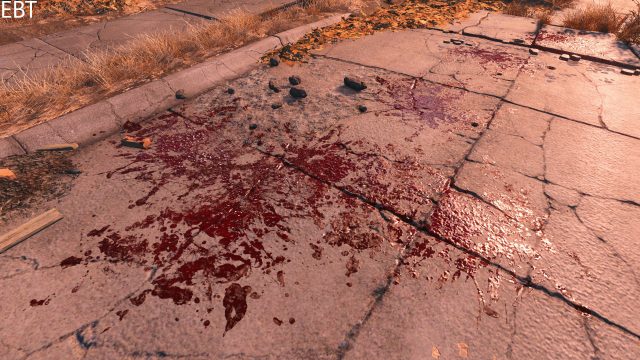 This mod is for someone who loves blood and gory visuals in a game. It improves blood visuals and makes it look more realistic, whether it’s a blood splatter by a gunshot, stabbing, or decapitation. This mod adds detailed textures and animations to the blood splatter and if you prefer the realistic feeling of blood in the game, you are going to love this mod. Shooting, stabbing, decapitating your enemies was never this much fun and you can now enjoy high definition blood textures while killing your enemies, which adds to the overall fun. 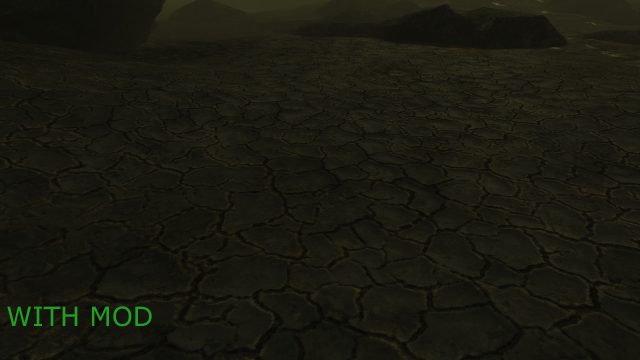 The Texture Optimization mode focuses on improving the frame rate of Fallout 4, without sacrificing too much on visual fidelity of the game. It replaces the high resolution and demanding textures with properly compressed and upgraded textures resized for better performance. The real advantage of this mod is that people who own low budget Graphic Cards will be able to play the game smoothly without having to sacrifice performance. It will optimize the entire game for low-to-mid end graphic cards, so that it can run smoothly on under-powered machines. 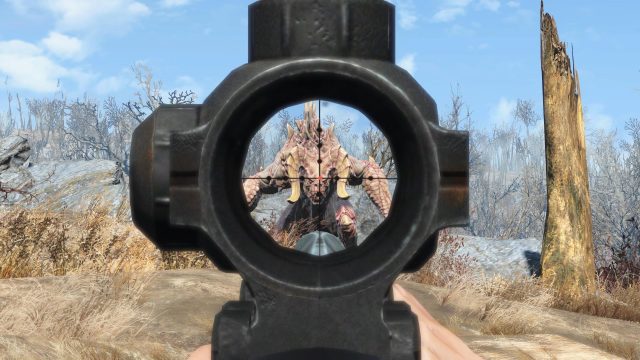 If you are tired of the blurry scope available on your weapons in Fallout 4, this mod will surely diminish that problem. This mod brings players a CoD-like scope on weapons, so that the enemies are clearly visible and they can take the perfect shot from anywhere. There are different zooming capabilities ranging from 8x to 2.5x, so you can should be able to shoot someone who is at quite a distance. You can customize the small reticle of the scopes to suit your needs during combat. 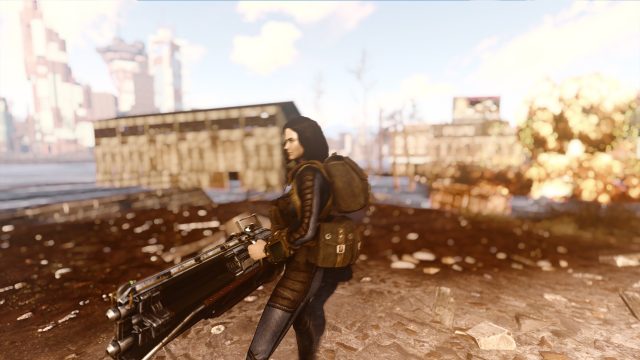 This mod allows the player to add a backpack, that comes in handy for carrying extra items. Players get extra space to keep the new and additional stuff, rather than sacrificing  other valuable stuff to create space in the inventory. The backpack makes it easier to go out scavenging for extra loot. You don’t have to throw away other items in your inventory to create space because having a wearable backpack will give you additional space. The backpack is lightweight enough that it doesn’t affect your moving speed at all.

SEE ALSO: 15 Best FPS Games for PC You Should Play

Try these cool Fallout 4 Mods to revamp the game

If you love Fallout 4 but feel a little bored with the gameplay, these amazing mods will completely revamp and reinvent your Fallout 4 experience. So, try out these Fallout 4 mods and let us know your thoughts. Also, if you have other cool Fallout 4 mods, feel free to share them with us in the comments section below.