If you have been following the 4K HDR monitor market, you’d know that most models were well out of reach of the average buyer, with prices well above the Rs. 50,000 mark. This has also made 4K content less accessible unless you had deep pockets..

Obviously, the price demanded our attention so we decided to take a closer look at the latest monitor from BenQ, and see whether its picture quality and feature set are enough to justify a recommendation from us.

The first thing you’ll notice about the BenQ EL2870U is that it doesn’t look all that great with its chunky (as per 2019 standards) bezels and use of matte black plastic components throughout.

But once you start using it, you’ll notice that it’s surprisingly well built and the bezels aren’t all that intrusive. The monitor is definitely quite ‘simple’ to look at, with a pretty standard rigid stand, a significant chin which has all the hardware buttons and the ambient light sensor. 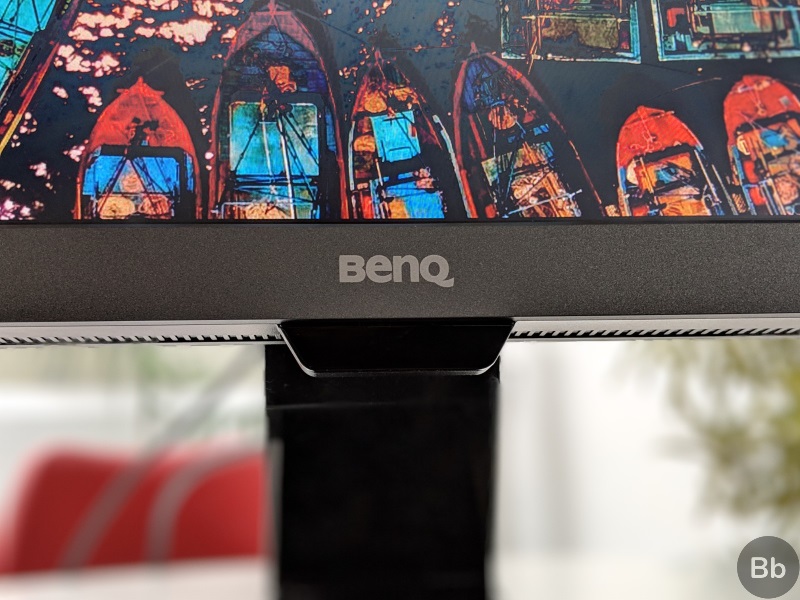 In comparison, some of the recent monitors in the same price range from companies like Dell and HP look a whole lot more modern with their minimal bezels and fancy stands. But then again, those monitors pale in comparison to the EL2870U’s feature-packed spec list, which is ideally what you should be looking at to begin with.

Granted that the competitions tiny bezels and swiveling stands seem quite impressive when you first look at the monitors, but their novelty quickly wears out once you start using them, and you’re less concerned about their looks and more concerned with what you’re actually seeing on the display. This is exactly where the EL2870U shines, but more on that later.

For now, lets talk about what you get in the box when you order a brand new BenQ EL2870U. With every BenQ 2870U you’ll receive a rather heavy stand which ships in three pieces and requires a Philips-head screwdriver to assemble, a power cord with no external power supply which is great, a standard HDMI cable and some paperwork that you’ll probably never look at. Now that the box contents are out of the way, lets address all the buttons and ports on the monitor. 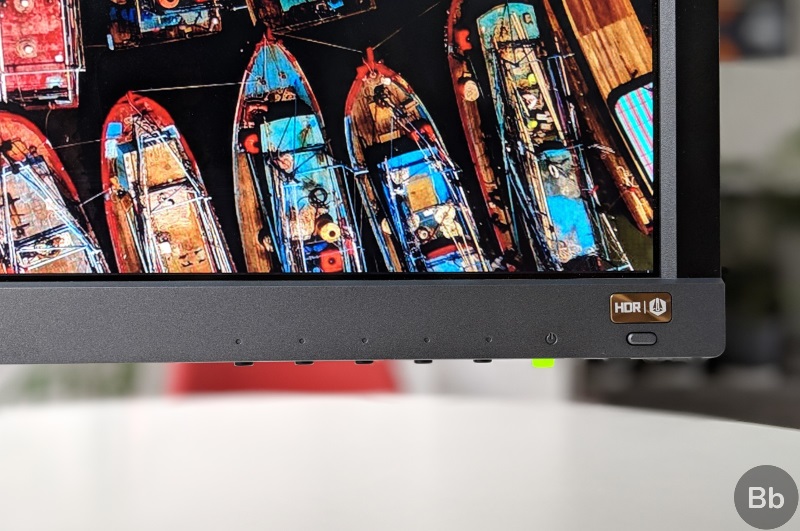 All the hardware buttons on the BenQ EL2870U are placed on the underside of the right corner of the bottom bezel, with the exception of the dedicated HDR/BI button which is placed up front and has a copper colored sticker placed above it.

In terms of connectivity, the monitor features the bare minimum ports you’d need to connect it to a system, including two HDMI v2.0 input ports, a single DisplayPort v1.4 port, a 3.5mm headphone jack and a power input port. The lack of any USB ports is a major shortcoming. 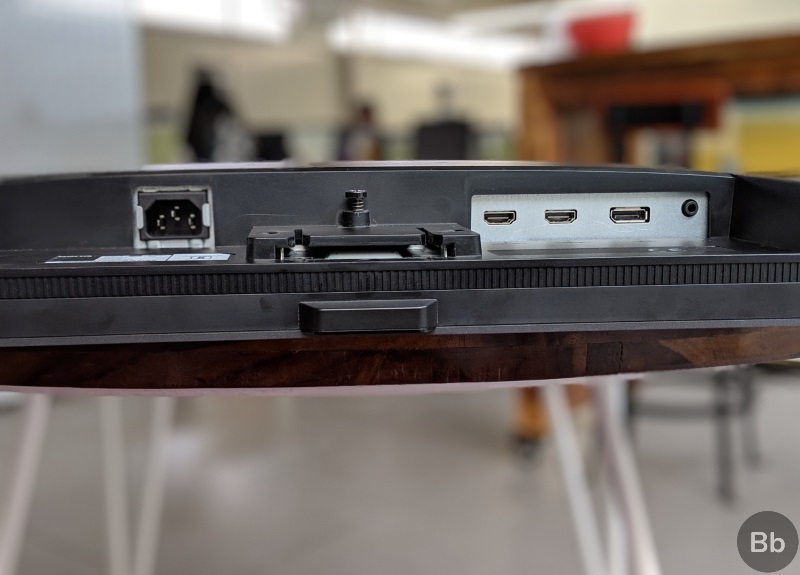 All ports face downwards and are housed within the mounting cutout at the back of the monitor. I’m not a big fan of the port placement, as it makes connecting and unplugging the cables quite cumbersome, but it keeps the wires out of the way and since the wires don’t stick out of the back you can place the monitor as close to the back wall as you want and maximize desk space.

The monitor also packs in two 2 Watt speakers that are barely audible and sound quite poor to be honest. So if you plan on purchasing this monitor for multimedia consumption, do note that you might also have to invest in a good pair of speakers to go along with the 4K display.

The BenQ EL2870U features a 27.9-inch 4K 3840×2160 TN panel with an LED backlight and it’s definitely a pretty good panel for media consumption. As mentioned above, the display has a standard 16:9 aspect ratio with a pixel density of 158ppi and a maximum brightness of 300nits. It has a fast 1ms (GtG) response time which should be great for gaming, but the refresh rate is limited at just 60Hz which is a bummer. 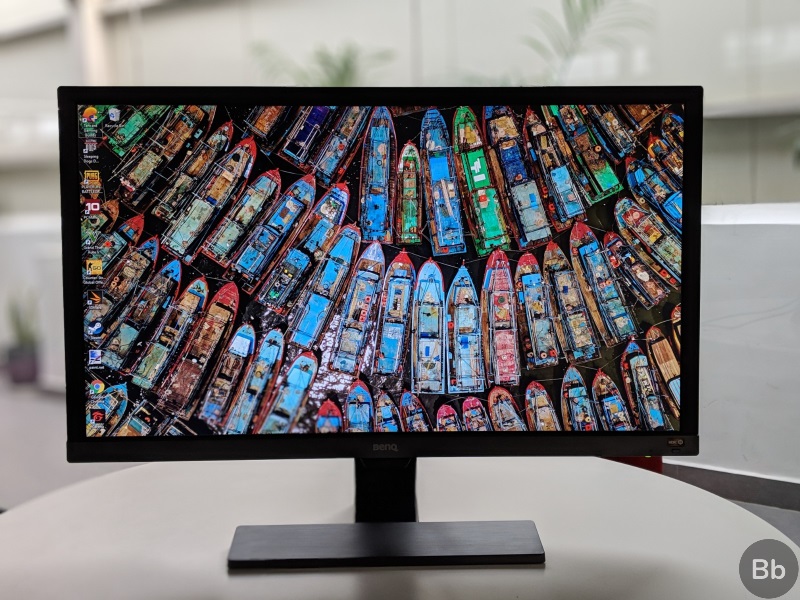 The panel’s viewing angles are pretty solid, with the company claiming clear visibility 170 degrees vertically and 160 degrees horizontally. However, in my use, I definitely noticed some color shifting while looking at the display at an angle, something that’s is quite prominent when looking at the display from a steep vertical angle.

The display has a native contrast ratio of 1000:1, which isn’t all that great and that’s quite evident as the monitor fails to reproduce deep blacks. 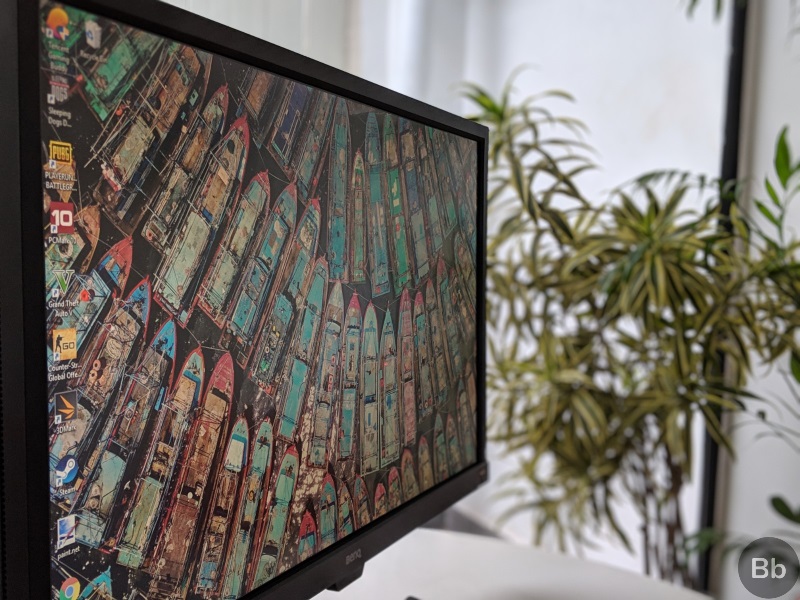 The panel has a matte finish, which is great if you wish to avoid screen glares, but the matte finish has a negative impact on the display’s color reproduction. Images and videos on the display look at bit washed out and, once again, blacks don’t look as deep as some other LCD or OLED panels.

The color reproduction is rated at 94 percent on sRGB and 74 percent on Adobe RGB, making the EL2879U a decent option for casual photographers or video editors on a budget, but it’s certainly not on par with professional-grade displays.

The display also comes with HDR support, along with a couple of HDR specific modes, which is probably why most prospective buyers will give this display a second look. However, since the display has a maximum brightness of just 300nits, it isn’t able to make the most out of its HDR capabilities. Therefore, media consumption and gaming without the HDR mode turned on looks a fair bit better than it does with the HDR modes activated. 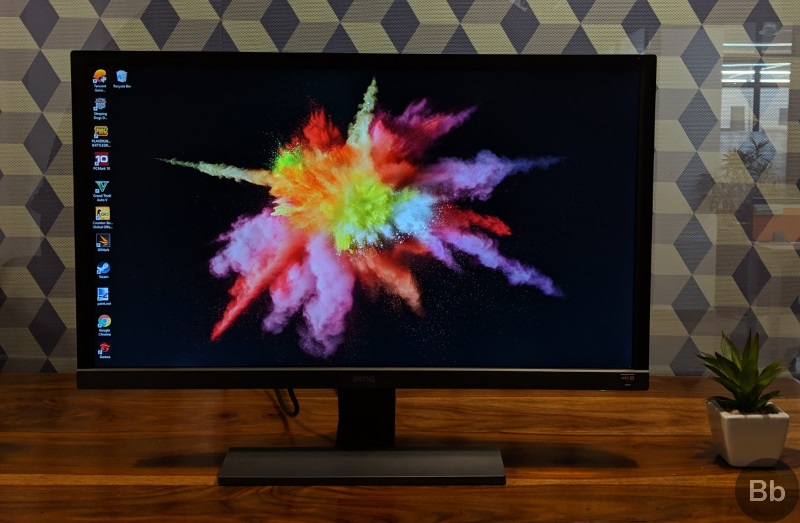 With the HDR mode turned on, there’s very little detail and visual artifacts in the blacks and the colors looked crushed at high intensities. So if you’re specifically considering the EL2870U for its HDR capabilities, you’re definitely going to be disappointed with your purchase. An IPS panel at the same price point will be able to reproduce better blacks and colors, with or without HDR support, making it a better choice.

The BenQ EL2870U’s display also comes with support for the company’s eye-care technology with TUV Rheinland certification for a flicker-free image and low blue light emissions. The technology is designed to filter out blue light which really helps in reducing eye fatigue and irritation over long periods of use.

To help users adjust the settings quickly on the fly, the monitor features a dedicated button that allows you to cycle between four presets, including multimedia, web-surfing, office and reading. Depending on what you plan on using the monitor for, you’ll need to select the appropriate blue light filter setting to get the best results.

The company has also bundled its Brightness Intelligence Plus technology on the display which, with the help of an ambient light sensor located right beneath the BenQ logo, can automatically adjust the display’s ambient light levels and color temperature based on your surroundings. This makes the monitor a great option for media consumption as it keeps optimizing the output to prevent eye strain over a long period of use.

The Brightness Intelligence Plus technology also adjusts the brightness automatically, which helps avoid overexposure and enhances the details in the darker areas of the image. This goes a long way in preserving the original color saturation and hue, and I preferred using the monitor with this setting turned on. 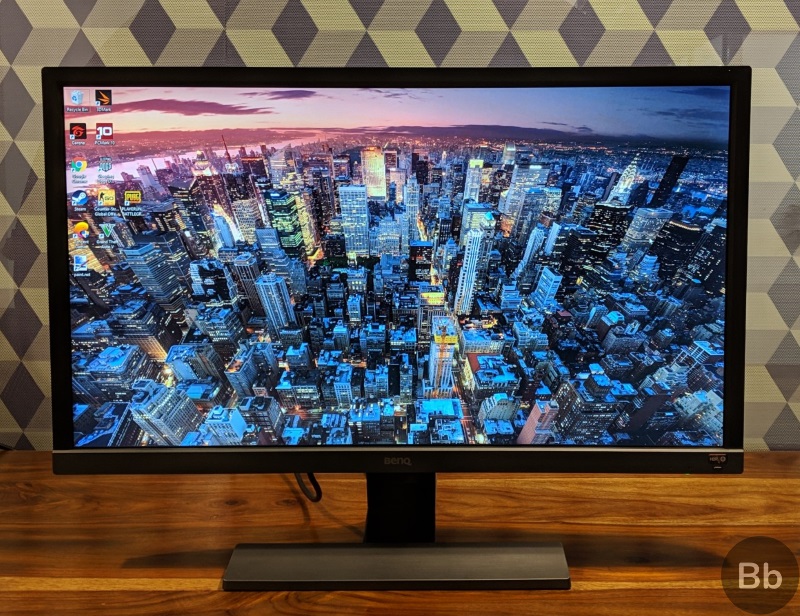 Additionally, the EL2870U features AMD FreeSync support which is great for those of you who wish to play games on the display. However, you’ll need to use a compatible AMD GPU in order to make use of this feature and since the refresh rate is limited to 60Hz, you shouldn’t expect FreeSync to make much of a difference. Since we don’t have access to a compatible AMD GPU, we weren’t able to test the monitor’s performance with the FreeSync mode turned on.

The BenQ EL2870U is a pretty decent monitor for the price and should be a great option for those of you looking for a 4K monitor on a tight budget. Priced at Rs. 32,265, the feature packed monitor is great for multimedia consumption, but it isn’t ideal for gamers.

Even though it comes with AMD FreeSync support, the monitor’s 60Hz refresh rate limits it from used for gaming, and there are plenty of other options in the market, with 120Hz or 144Hz refresh rate displays, which would be a better fit for gamers.

It competes with the LG 27-inch 27UK650-W 4K HDR monitor, which is priced just higher at Rs 33,895, but with a similar 60Hz panel and a slower response time as the BenQ monitor. The Acer 28-inch KG281K monitor on the other hand is far less expensive at around Rs 24,000, but it does not have the same anti-Blue Light emissions or brightness adjustment features which make the BenQ monitor more suited for prolonged usage.

The EL2870U is also a decent fit for photographers and videographers alike, thanks to its decent color reproduction capabilities, but you’ll definitely need to calibrate the display if you want the best color accuracy. The monitor’s HDR capabilities are shabby at best and you shouldn’t really consider the EL2870U if great HDR performance is one of your top priorities.