Skip to content
Home Tech A Beginner’s Guide to Hearthstone: Heroes of Warcraft

So you’ve downloaded Hearthstone: Heroes of Warcraft on your PC, phone, or tablet but want to know how to make the most of this game. Well, if that’s the case then you’re in luck because we’re going to help you get the most out of this amazing digital card game. This is not a gameplay guide, it’s not going to teach you how to play the game because you can learn that in the in-game tutorial which is very detailed and teaches you every aspect of the gameplay. What we are going to teach you is how to take your Hearthstone account to the next level without investing a lot of money.

Hearthstone is a card game which means that you need cards to compete in this game. Even though you get Basic (Free) cards when you start this game but in order to compete in the multiplayer mode, you need access to higher level cards that can be collected by buying packs or adventures. You can either use your real-life money to buy packs/adventures or collect gold in the game and buy it with the in-game currency. Collecting gold takes time but it’s free and it’s the safer/suitable choice for a beginner. Before hopping onto the multiplayer mode, you should complete all the basic quests to gather a decent amount of gold. 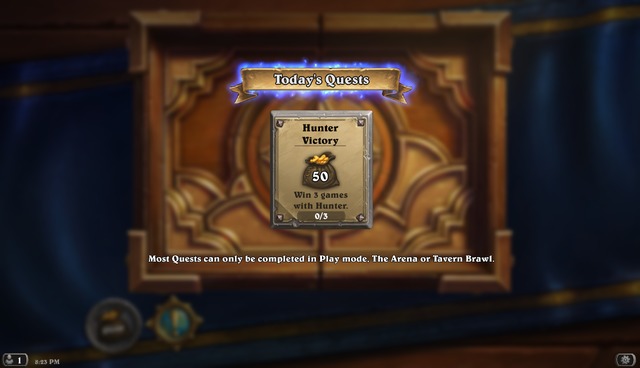 Here are the initial basic quests that you should complete to gain some extra gold. This free gold will help you boost your Hearthstone account by buying packs or adventure wings. The first 9 quests are very easy to complete. All you have to do is play and win some games in the AI mode. You don’t have to play against other players in multiplayer mode because these quests can be completed against AI as well.

Once you complete the first 9 quests (which should be fairly easy) from the above table, you will have nearly 400 gold, 3 Classic packs, and 100+ Arcane dust. You can use the gold to buy 4 more packs. We recommend buying Classic packs at first. You can buy other packs as well but you should first collect at least 75% of the Classic pack cards before moving onto other packs. You can also gain packs for playing on mobile platforms as mentioned in the table below.

You also get 1 quests each day that gives you 40, 50, or 60 gold depending on the quests you get. These quests are Daily Quests and you should complete them daily to gain gold everyday. You also get 10 gold for winning 3 matches in Casual, Ranked, or Tavern Brawl mode, however, this is capped at 100 gold max per day. So you only get 100 gold maximum for 30 wins each day. This is also a good way of gathering gold but it takes quite some time.

Opening packs is the faster and cheaper way of building a decent card collection but you should know that the packs are random and you won’t always get the cards you want. It’s fairly difficult to get your desired Epic/Legendary cards from the packs. So you can craft your required cards with Arcane Dust. 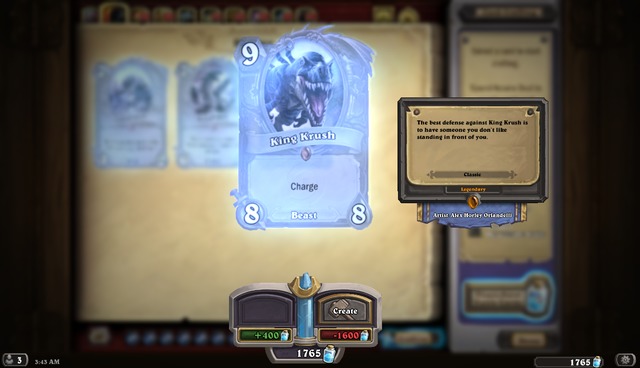 Here’s how crafting works, in your Card Collection click Crafting and you will see all the cards available to craft. Each card has a cost shown in Arcane Dust, you need the specific amount of Arcane Dust to craft a specific card. When you craft a card, you have to pay the full amount of dust, however, when you disenchant a card, you only get nearly 1/4th of the total dust. So always only craft/disenchant cards that you are sure about. You don’t want to craft something that you won’t use or disenchant something that you might use. Check the table below for Crafting Cost and Disenchant values for all the rarity types.

Golden cards are very valuable. If you get them then you can disenchant them for extra dust. You should also know that Golden cards have no special effects in terms of gameplay. They only look good and have some animations. When it comes to the gameplay, Golden and regular cards do the same thing. So always think about that before you spend twice the dust on crafting a Golden card.

What to buy? Adventures or Expansions?

You can buy Adventures or Expansions (Packs) in Hearthstone. You can either buy them with real-life money or in-game gold. If you want to spend real-life money on the game then the best way is to buy the Adventures because they’re the best bang for your buck. When you buy packs, there are no guarantees that you will get any Legendary or Epic cards, however, when you buy an Adventure, you’re 100% guaranteed to receive some Legendaries and other cards available in that specific Adventure. 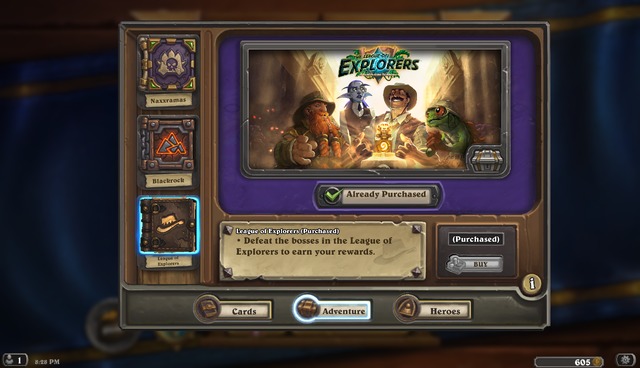 So, first you should buy Adventures because all adventures have some of the best cards that are commonly used in the top decks. However, also, keep in mind that Blizzard has announced new modes, namely Standard and Wild. Standard mode won’t allow Adventures or Expansions that are 2 years old. So don’t buy Naxxramas (Adventure) and Goblins vs Gnomes packs (Expansion) because these are rolling out when the new update hits within a month or so. You should also open packs to collect cards for your collection. Stick to Classic packs until you have at least 60-70% of the classic cards.

Only buy the latest adventures or expansions that have at least a year before they roll out of the game. If you do your daily quests and win games then you can make nearly 100 gold daily which should be enough for you to buy adventures/expansions with the in-game gold alone. 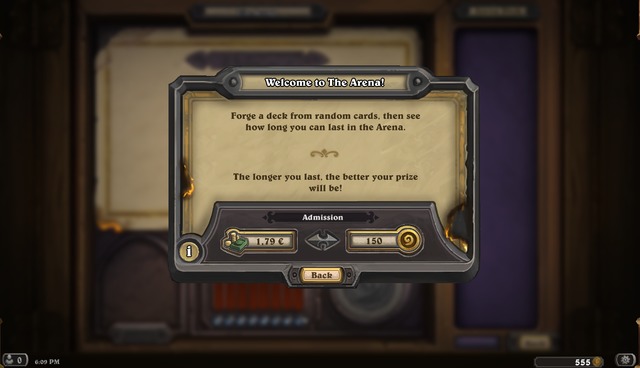 Once you unlock all the classes, you get access to the Arena. The first time you enter the Arena for free, however, after that you must pay 150 in-game gold or $1.99 for each entry. Arena tests your knowledge of the game. You are given a choice of three classes to pick from, generated randomly. You also get to build an entire deck from random card choices. So the more you know about the game, the better you can draft your deck and make a killing in the Arena. If you lose all 3 of your games in the Arena then you get a card pack (100 gold) and some Arcane dust which means ultimately you lost 50 gold, if you paid with gold. To break even, you have to win at least 5-6 games in the Arena. If you win 12 games which is the max then you make at least 400 gold and get amazing card rewards as well, however, that’s quite difficult especially for a newbie. So use your free Arena ticket once you are familiar with the game so you can get a decent amount of wins.

Don’t get pressured into playing Arena, it may be the best way to earn a lot of gold but it’s not the easiest. Stick to your daily quests and familiarize yourself with the game before doing Arena runs. Watch popular players like Kripparian, Hafu, etc to learn the ways of doing effective Arena runs.

Which Class to choose? 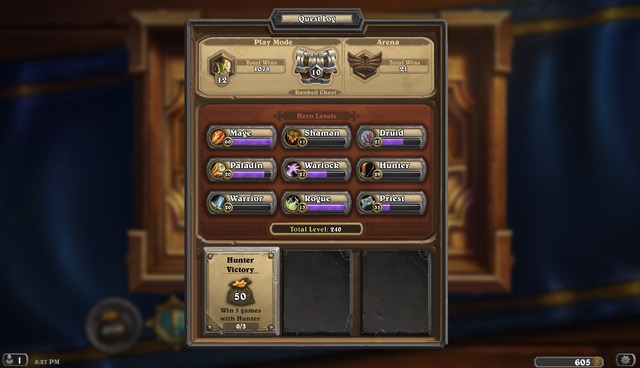 You will start off your tutorial with Mage and it’s one of the most well-rounded class in Hearthstone. You get access to amazing spells, decent minions, and a decent hero power when using Mage. However, you should pick a class that suits your playstyle. Play games with each class and take them all to level 10 before choosing your favorite class. Some classes require more than just basic cards to be effective while some rely on their basic cards most of the time. Choose a class that works well for you and stick with it for a while. If you’re going to be a F2P (Free to Play) player then you should know beforehand that you can’t build top tier decks for each class. You need to pick 2-3 classes and focus on them. If you are pouring real-life money then you can have as many decks as you want, depending on how much you spend.

What is Tavern Brawl?

Every week you get the chance to take part in a new Tavern Brawl. Each Tavern Brawl has completely different set of rules than the regular game. You get to try wacky new strategies in the Tavern Brawl each week and to make it even more amazing, you also get one Classic pack for free when you win the first match in Tavern Brawl. So you can get 1 Classic pack free each week with just Tavern Brawl. This means 4 free Classic packs each month which should be good enough for a free player to build their collection over time.

The Do’s and Don’ts

Hopefully, these tips will help you take your Hearthstone game to a new level. Specially, people who don’t want to invest real-life money into the game can benefit more from these tips. You can easily be a free player and still play the game competitively. You just need to bring you expectations down a little bit because it takes time and patience to build a collection for free in Hearthstone. Let us know what you think about Hearthstone and also share some of your tips for newbies.

How to Use Kodi on PC or Mac: A Complete Guide

How to Use iMovie: A Complete Guide to Make Home Video