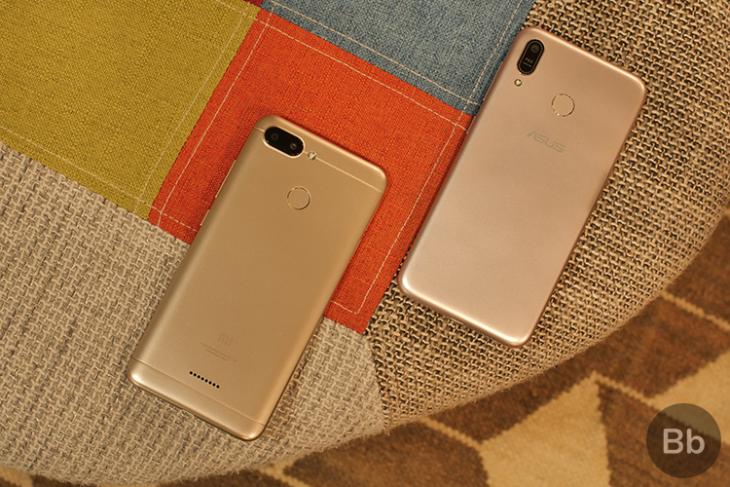 Asus and Xiaomi first locked horns with the launch of the ZenFone Max Pro M1 earlier in 2018, which gave the Redmi Note 5 Pro a serious run for its money, and challenged Xiaomi’s dominance in the affordable mid-range segment. The Taiwanese giant is hungry for more and is now gunning for the budget segment with the ZenFone Max M1, which will be available by the end of this month on Flipkart.

Asus appears to have selected rival phones as targets and built a phone to take them on. The ZenFone Max M1 has been competitively priced at Rs 7,499 (introductory price) with the Redmi 6 sitting right in its sights.

We’ve had the ZenFone Max M1 for a couple days now and here’s how Asus’ new budget device fares against its arch-nemesis, the Redmi 6:

Before we go ahead and discuss my personal experience with both these phones, let’s take a quick peek at the key specs for these smartphones.

Both of these entry-level smartphones, the ZenFone Max (M1) and Redmi 6, imbibe the design and aesthetics of its older brethren who’ve been competing with each another for quite some time. They are both quite light, especially the ZenFone Max M1 despite holding a massive 4,000mAh battery.

The two devices hold an uncanny resemblance on the front, with both the ZenFone Max (M1) and Redmi 6 sporting a 5.45-inch HD+ screen (1440 x 720 pixels). There’s no notch on either of the devices and you get plenty of bezels. 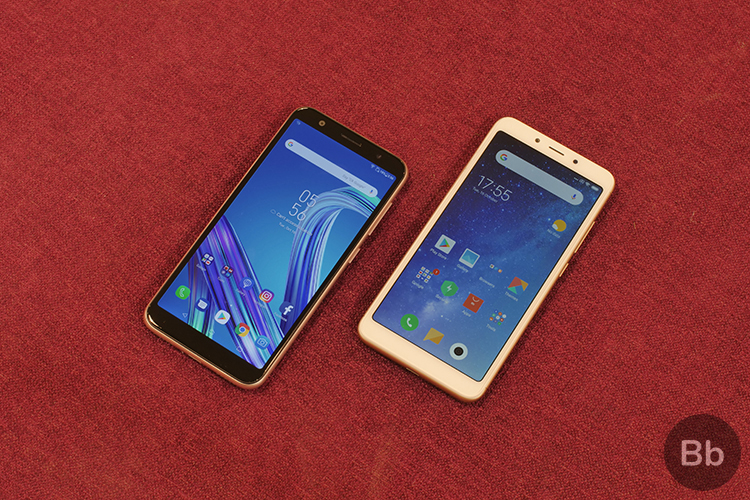 Turning our attention to the rear, the devices feature polycarbonate builds with a metallic finish but in my opinion, the ZenFone Max M1 has a better in-hand feel and looks more premium than the Redmi 6. Its metallic coating is more refined and does not feel cheap.

The power button of the ZenFone Max M1 is textured, which is a small but nifty addition.

While the Redmi 6 includes a horizontally-placed dual camera setup, the ZenFone Max only has a single rear camera sensor (which we explore below). The selfie camera on both of these devices comes with an LED flash, which is yet another nifty addition.

Finally, both the devices include a micro-USB charging and data transfer port (we are not even expecting USB Type-C in this price segment), along with a 3.5mm headphone jack at the top.

Xiaomi’s MIUI is touted to be one of the most popular custom ROMs among smartphone users and even I believe that it’s well-optimized, looks great and packs a myriad of new features to keep you busy.

The MIUI 10 experience on Redmi 6, which rolled out earlier this month, has been improved and smoother than what I had experienced in the past. It is, however, littered with ads and I hate that.

Asus has, however, also totally revamped ZenUI and the fifth iteration of the company’s skin feels light, and is no longer bogged down by a ton of bloatware or ads. It holds a resemblance to Samsung’s Experience UI, especially the icons but in the brief time that I spent with ZenUI 5.0, it worked fine and also has additional features like the Audio Wizard, Face Unlock, Glove Mode, and more. 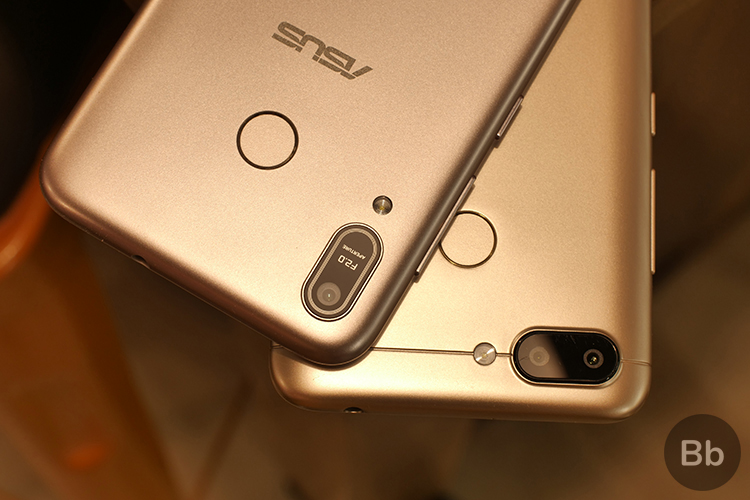 From the camera samples attached below, you can see that the ZenFone Max M1 clicks some good photos but they look a bit saturated at times, which many users might like. The Redmi 6, however, is much better at handling light and colors in comparison to the ZenFone Max. The photos clicked from Xiaomi’s budget king look a lot better in my brief time with the phones.

ZenFone Max M1 also performs decently in low-light situations, retaining the details and highlights but the shots appear dull as compared to the Redmi 6. The latter captures more light and the shots just look better for daily use i.e when you don’t pixel-peep.

Talking about portraits, well, both phones have good edge-detection and add natural-looking background blur to your photos but it tends to over-saturate images here too.(you’ll see what I’m saying below). I’d have to say that the 5MP depth sensor on Redmi 6 is surely helping Xiaomi here present a more balanced photo, even though the colours are not accurate.

You can check out some of the comparison shots right here to judge both phones:

As you must have seen above, ZenFone Max M1 and Redmi 6 are equally capable phones. While the former is powered by a Snapdragon 430 processor, the latter comes with MediaTek Helio P22 chipset – which is at par with Snapdragon 400-series chipsets. They both include 3GB RAM and 32GB internal storage, which should be ample but if you feel it isn’t enough then you can expand it by up to 256GB using the microSD card slot.

In our review, we thought the Redmi 6 is not a well-optimized Xiaomi phone, and noticed stutters, as well as frame drops, across the whole MIUI experience. This was more apparent in gaming sessions. 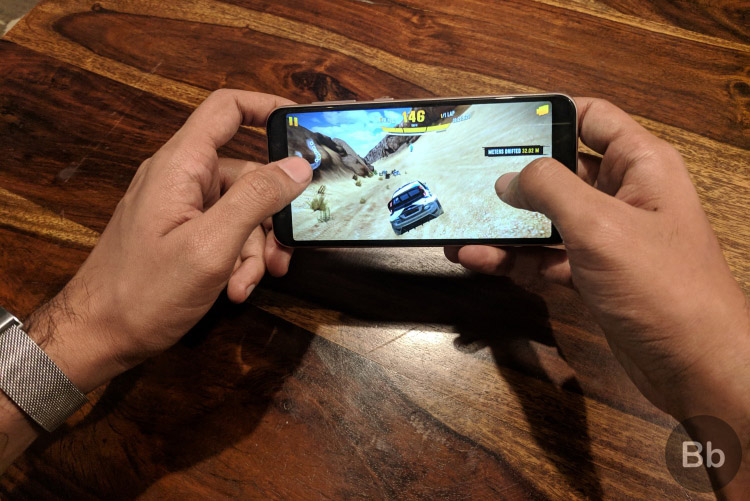 The ZenFone Max M1 seems to be better optimized than the Redmi 6 at first sight, with minimal stutters during my brief time spent with the device. My Asphalt Xtreme and PUBG gameplays were also quite smooth (with minor frame drops here and there), with latter automatically running on low graphics by default. We will have to spend more time with the device to talk about this with any certainty.

Xiaomi realized the potential in the Indian market early on and has now been leading the budget pack for quite some time, but most phone makers are now trying to take the fight back to the Chinese giant. Asus is among them, and it might be able to with the ZenFone Max M1, which is super light, equally powerful, and just as feature-packed. 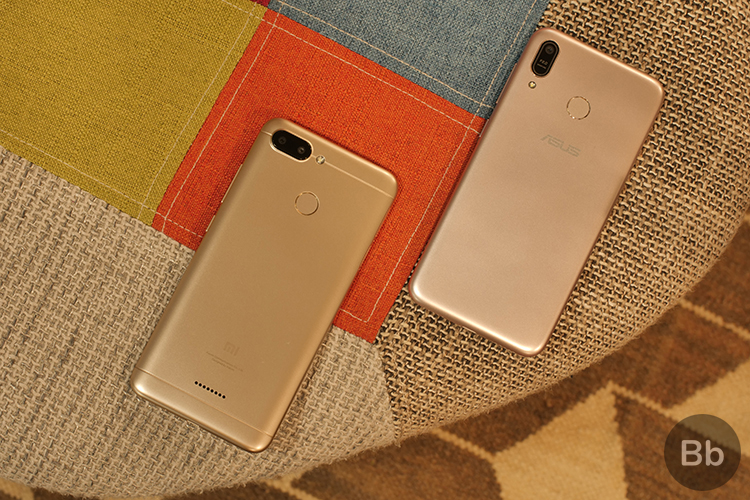 There’s still a lot to explore in the ZenFone Max M1 and you will have to wait for our in-depth review for the same, but we wanted to give you a brief look at how the latest from Asus compares to Xiaomi’s budget leader.

So, which one of these entry-level smartphones would you be interested in picking up at the end of the day? Let us know in the comments down below.