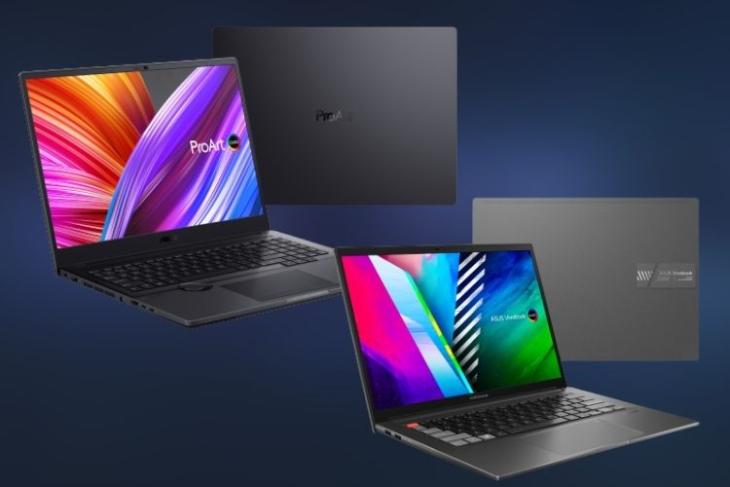 Asus has been on a roll, releasing new Windows-powered gaming laptops and Chromebooks in India recently. And today, the Taiwanese giant has launched an array of new StudioBook and VivoBook laptops under its new ProArt series, specifically targeted towards creators in India. Along with the laptops, the company has also announced a dedicated platform, dubbed Asus ProArt Lab, for new and established creators to expand their skills and knowledge in the sector.

Now, before moving on to the ProArt Lab, let’s take a quick look at the new StudioBook and VivoBook laptops that Asus recently launched under the ProArt series in India.

Asus has launched a total of 8 laptop models, including a new StudioBook and 7 new VivoBook laptop models, targeted towards creators. The laptops come with both Intel and AMD configurations and pack various industry-first features like the Asus Dial design and a stylus-supported trackpad to aid content creation.

So, let’s take a look at the key specs and features of the new ProArt series laptops individually in the following segment.

The first in line is the premium ProArt StudioBook 16 OLED laptop that comes with the model number H5600. The device sports a 16-inch 4K OLED panel with support for a 100% DCI-P3 color gamut and a 16:10 aspect ratio. The display comes with Pantone certification and it’s factory-calibrated to have Delta-E < 2 to produce accurate colors, which is essential for creative works like designing or photo editing.

Under the hood, the device packs up to AMD Ryzen 9 5900HX CPU along with up to Nvidia GeForce RTX 3070 GPU. Moreover, it can be configured with up to 64GB of DDR4 RAM and up to 1TB of PCIe SSD.

Other than these, the device has an SD Express 7.0 slot for SD cards that can deliver up to 985 MB/s transfer speeds, which is 10x more than traditional SD card readers. This is, especially, useful for creators who often need to transfer large files such as RAW images and MOV files from their cameras.

Coming to the VivoBook Pro X models, the company released four variants under the series with model numbers M7400, M7600, N7400, and N7600. The devices, namely the VivoBook Pro 14X and the VivoBook Pro 16X, come with a 14-inch and a 16-inch NanoEdge 4K OLED panel with support for a 100% DCI-P3 color gamut, respectively.

The laptops can be configured with either AMD Ryzen 5000 H-series CPUs or 11th-Gen Intel Core i7 processors. It can feature up to Nvidia GeForce RTX 3050 Ti GPU. Moreover, the laptop can pack up to 16GB of DDR4 RAM and up to 1TB of SSD.

The models also come with Asus’ dual-fan cooling system paired with Asus IceCool Plus thermal solution to keep the temperatures down during heavy-duty tasks. Furthermore, the VivoBook Pro X series comes with the Asus DialPad, which is a first in the laptop segment. Plus, it packs a 96Wh battery to deliver long hours of battery life.

Lastly, Asus has released the VivoBook 14/ 15 OLED laptops in the lower segment to attract new-to-the-industry content creators who are looking for powerful yet budget-centric machines for content creation. The company launched four variants, with model numbers M3401, M3500, K3400, and K3500 under this series.

They can be configured with either AMD Ryzen 5000 H-series mobile CPUs or 11th-Gen Intel Core i7 CPUs. For graphical tasks, VivoBook Pro 14/ 15 OLED pack the Nvidia GeForce RTX 3050 GPU. Moreover, the devices can pack up to 16GB of 3200Mhz DDR4 RAM and up to 1TB of SSD.

Coming to the price and availability of the new ProArt series laptops, the company will start selling the VivoBook Pro X and VivoBook Pro laptop models across various online and offline platforms, starting from today. The ProArt StudioBook 16 OLED, on the other hand, will go on sale sometime in January 2022.

The Asus ProArt Lab is a dedicated program launched by the company to aid new as well as established creators in the content creation sector. The Taiwanese company worked with various creators in the industry to design the program for budding artists, designers, music producers, and other creative individuals.

“We have designed and curated a program for budding content creators to learn from the best in the Industry. With the Asus ProArt Lab, we are bullish to create success among the creators’ community through our new ProArt product line-up,” said Leon Yu, the Regional Director of Asus India and South Asia, in a statement. “India is an important market for us and we will continue to introduce innovation designed to meet the emerging needs of the Indian community,” Yu further added.