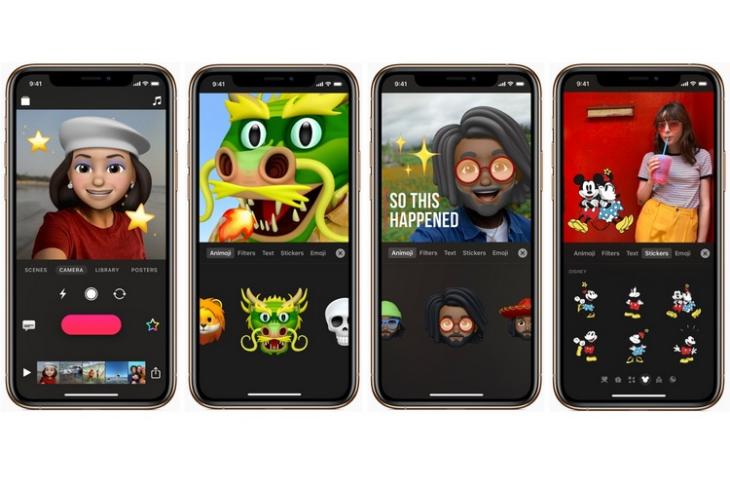 Apple has updated its free video creation app on iOS, Clips, with a number of new features that the company hopes will make it more appealing to users around the world. First off is the addition of Animoji and Memoji that can follow the movements of a user’s face for fun selfie videos using the front-facing TrueDepth camera on compatible iPhone and iPad models.

The enhanced animated stickers and emojis can be added to personal video messages, slideshows, school projects and mini movies before sharing them on the web. “Users can also layer their Animoji and Memoji video clips with all their favorite existing features in Clips like artistic filters, animated text, music, stickers and more”, said the company.

The update also adds a number of other cool features, including seven new stickers featuring Disney’s Mickey and Minnie Mouse. There’s also a new, winter-themed ‘Let it Snow’ poster (see below) to perfectly encapsulate the feeling of the season. Last, but definitely not the least, the update also brings support for right-to-left languages, including Arabic and Hebrew.

Clips 2.1 has just started rolling out on the App Store. While the app itself is compatible with iPhone 6s and iPhone SE or later, iPad Air 2 or later and iPod touch (7th-generation) running iOS 13 or iPadOS 13, the new Animoji and Memoji feature uses the TrueDepth camera, which means it will only be available on a handful of recent iPhone devices and the iPads Pro.

In case you don’t know it already, Clips is an iOS app available on iPhones and iPads. Developed by Apple’s in-house engineers, it enables users to create personal video messages, slideshows, school projects and mini-movies with features like Live Tiles that automatically generates animated captions from a user’s voice. It also lets users personalize their videos with dozens of filters, animated stickers and full-screen animated posters.