Android Oreo has been received with much fanfare. In fact, I, too, am in love with this new update. Of all its features, I especially love the password autofill, the notification dots, and the picture-in-picture mode. However, Android Oreo’s release has not been without complaints. A lot of users are complaining about numerous bugs which have plagued this release. Now, any new OS update always suffers from some bugs, but, in the case of Android Oreo, the bugs are pretty annoying as they are messing with some of the basic functions of the OS. One more frustrating thing about Android Oreo’s update is that some of the features differ depending on the device you are using. If you are a Pixel owner, you will be receiving an update which is both aesthetically and functionally better than the one received by the owners of the Nexus line of devices. This is just unacceptable. So, in today’s article, we are going to cover all the Android Oreo common issues which users are experiencing and also the steps to fix them.

Note: After you update your device to Android Oreo, first of all, you should restart your device. Although it’s a basic step, it should resolve some of the minor annoyances that you are facing.

One of the major problems that users are experiencing after updating their device to Android Oreo is with their Bluetooth connectivity. Users are experiencing frequent drops in the Bluetooth connectivity as the connection has become erratic and sporadic. Although a proper fix will be released by Google, you can take some steps to ensure proper functioning of your phone’s Bluetooth.

1. If you are experiencing Bluetooth connectivity problems even after restarting your device, go to the Settings page and “Forget” all your connected devices and then reconnect them. In most of the cases, this should solve all the problem. To do that, go to Settings->Connected Devices->Bluetooth. Here you will see a list of all your connected devices. Tap on the settings wheel icon present beside each of the device’s name and hit “Forget”. 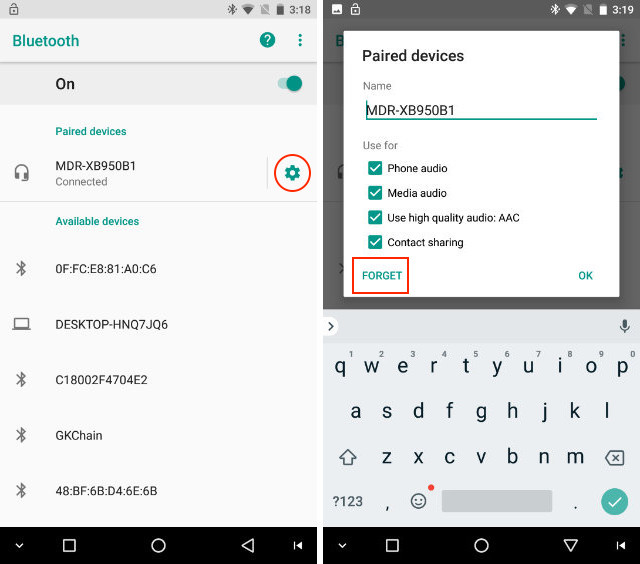 2. If that doesn’t solve your problem, you can try to reset your network settings. To do that go to Settings->System->Reset->Network Setting Reset and tap on the “Reset Settings” button. 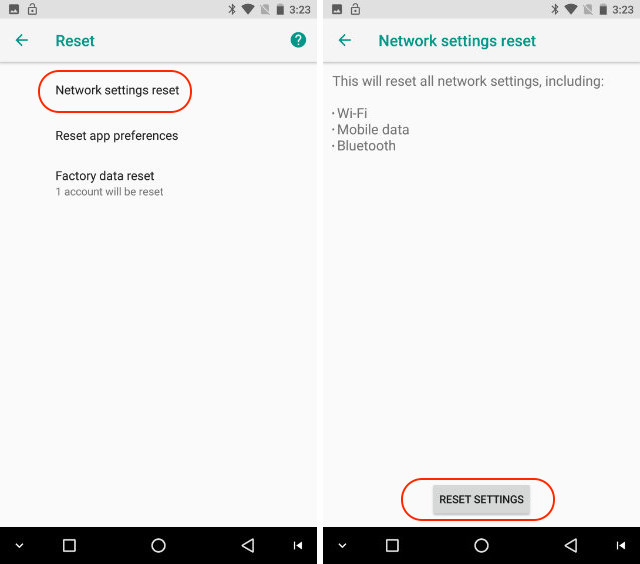 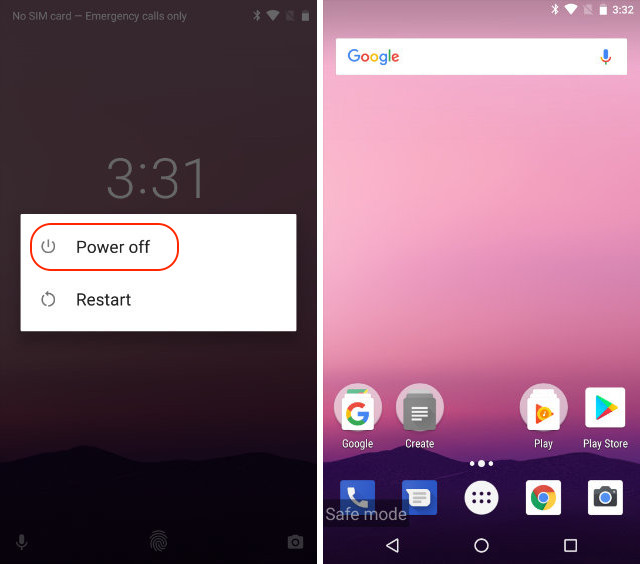 Note: Restarting your device in the Safe Mode will remove all your widgets, so be sure to take the screenshots of your widgets so that you remember your preferences when you have to add them back.

Although WiFi connectivity problems have not been as widely reported as the Bluetooth connectivity one, there are some users who are complaining about some bugs. The steps to fix your WiFi connectivity problem will be the same as the ones which we just went through. First, we will “Forget” all the saved network connections. If that doesn’t solve the problem we will reset the network settings and as a last resort, we will try to restart the smartphone in the Safe Mode. As the last two steps are the same, I won’t be writing them again here. You can just follow the ones mentioned above.

1. To forget the WiFi Networks, go to Settings->Network & Internet->WiFi->Saved networks. Here, just tap on the name of the saved networks one by one and then tap on “Forget”. Now, reconnect to your network by typing in the password. 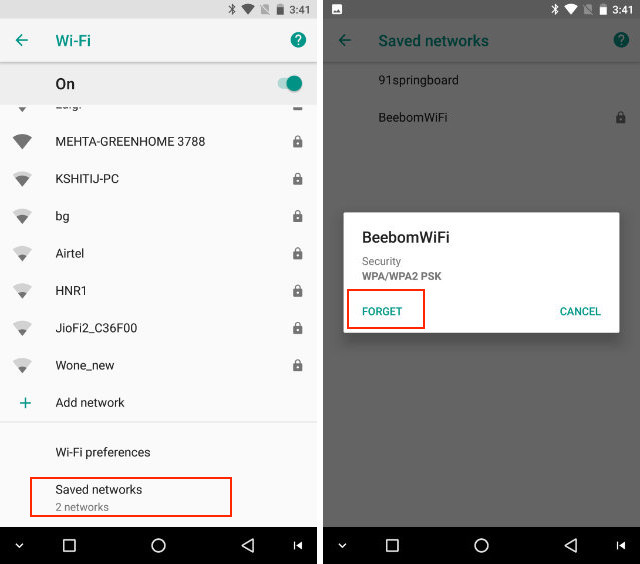 As mentioned before, steps 2 and 3 will be same as that mentioned in the “Bluetooth Connectivity Problems” subheading. If the first step doesn’t solve your problem, follow them.

While the Nexus devices are first in the line (after Pixel) to receive the Android Oreo update, their joy has been maligned by the fact that some of the features coming to the Pixel devices are not for them. I personally feel that it’s bad on Google’s part to do that, but, there’s nothing we can do about it, other than finding some workaround to bring back those features. One of the biggest gripe of Nexus users with this latest update is that they are still stuck with the square icons. As the Pixel launcher is exclusive to Pixel devices, there’s no way to get those beautiful rounded icons, or, is there?

Well, you can install a custom APK of the Pixel launcher to get most of its features including rounded icons, notification dots, and all sorts of stuff. What’s even cooler is that this APK can be installed on devices running Marshmallow and higher, allowing you to get these features even if you own a secondary device which has yet not been updated to Android Oreo.

1. Just head over to this link and download the APK file shown in the picture and install it. Then make it your default launcher.

2. Now, to change the icon’s shape, long press on the home page and tap on “Settings”. Here tap on the “Change icon shape” option.

3. Now, select the “Circle” option to get the rounded icons. The below picture shows you new circular icons which you get after selecting the said option.

Another feature missing in the Nexus devices which is present on the Pixel devices is “Night Light”. Night Light is a very handy feature which filters the blue light coming out of your smartphone’s display, giving it a warmer hue. It is a very handy feature as the warmer colours are easy on your eyes especially in the night time. Also, blue light has been found to interfere with our sleeping patterns, hence people using their smartphones in the night have trouble sleeping. These days, the Night Light feature is natively included in almost all your smart devices including laptops (macOS and Windows) and smartphones (iOS and Android). 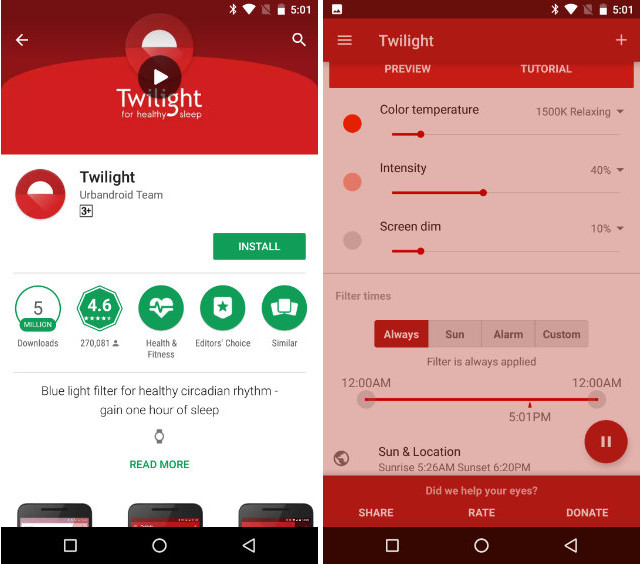 As all OEM’s including Google (Pixel) include this blue light filter feature, I really cannot grasp the reasoning behind its removal in the Nexus devices with Android Oreo update. Thankfully, there are a couple of good third-party apps which can help you do that. If your device is not rooted, you should go with Twilight (Free/$2.99). However, if you have a rooted device, the ever popular, “f.lux” (Free) will give you more control. If you are looking for some more options, you can check out our article which lists the best of them.

5. No Auto-Enable WiFi in Non-Pixel Devices

While we are on the topic of features which Google kept exclusive to their Pixel devices, here’s one more. There’s no toggle which allows the device to automatically enable WiFi when you are nearby a saved network. I don’t know why Google kept this feature exclusive to Pixels, but it is what it is. But, you don’t have to worry much, as there is an app which can allow you to do just that. 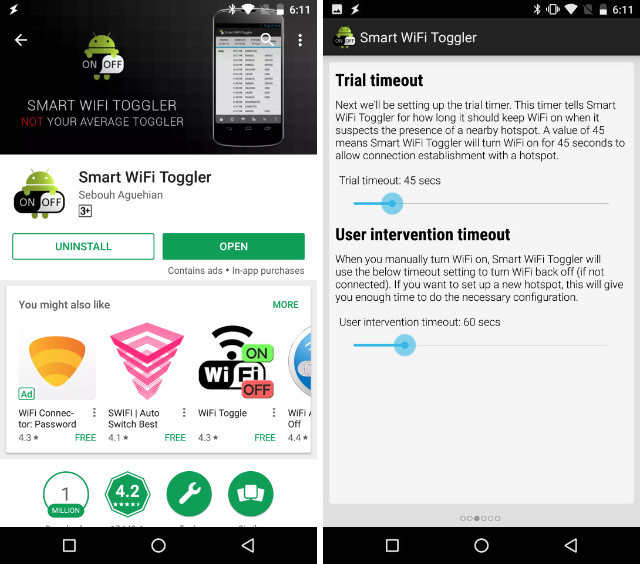 Download the “Smart WiFi Toggler” app from the Play Store and it will do the work for you. Not only that, the app also disables your smartphone’s WiFi when you move out of the range of your saved WiFi networks. Just launch the app and it will guide you through its simple and easy set-up process. Once you are done with the setup, the app will work flawlessly. 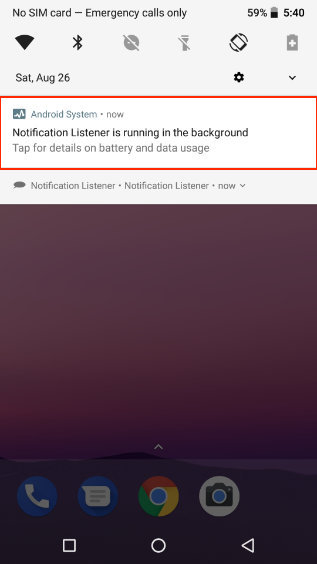 Note: This tutorial was originally posted by Marco Stornelli on a Reddit thread. He is a developer of many free Tasker plugins (an app which we are going to use today).

1. First, install the “Tasker“($2.99) app and the “Notification Listener” (Free) app from the Play Store. Now, download the Tasker Profile needed to activate this feature. The profile was made by Marco himself, and you can download it by tapping on this link.

2. Open Tasker, and tap on “Tasks”. Now, tap on Tasks again to bring the import menu. Tap on it to import the XML file that we downloaded. 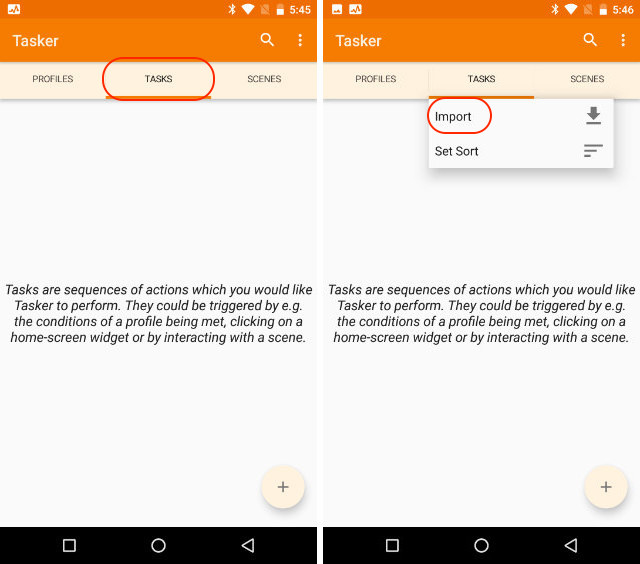 3. Tap on the arrow present on the top right corner and navigate to the downloaded file and import it. 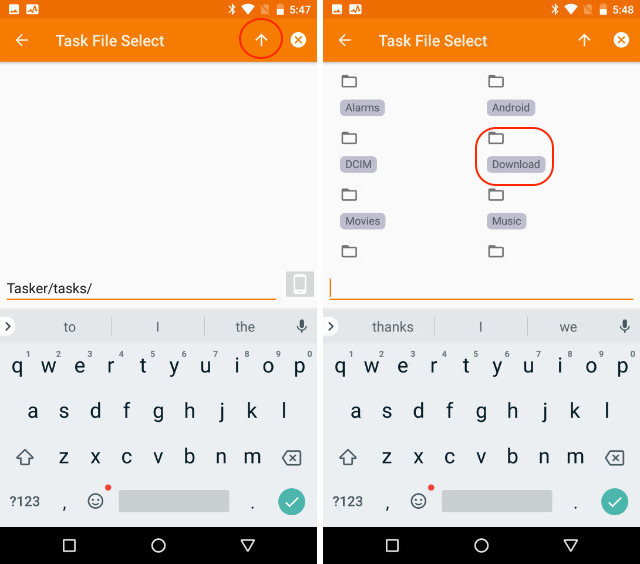 4. Now, you should be able to see your imported file in the “Tasks” tab. Now, tap on the “Profiles” tab. 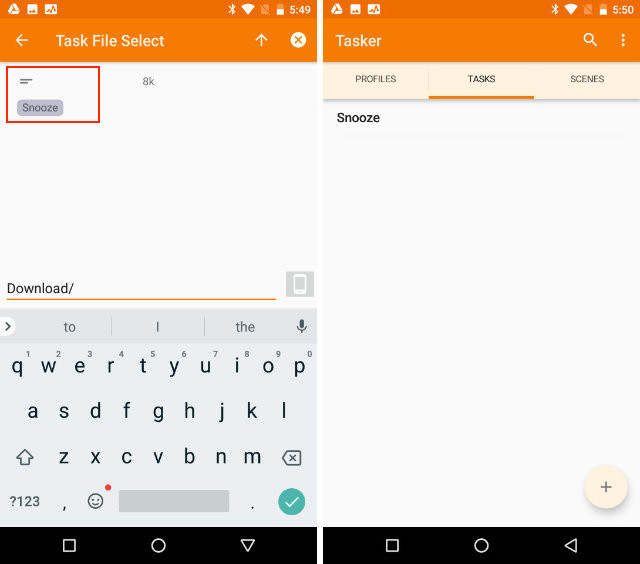 5. Here, press the plus button at the bottom right corner and then tap on “Event”. 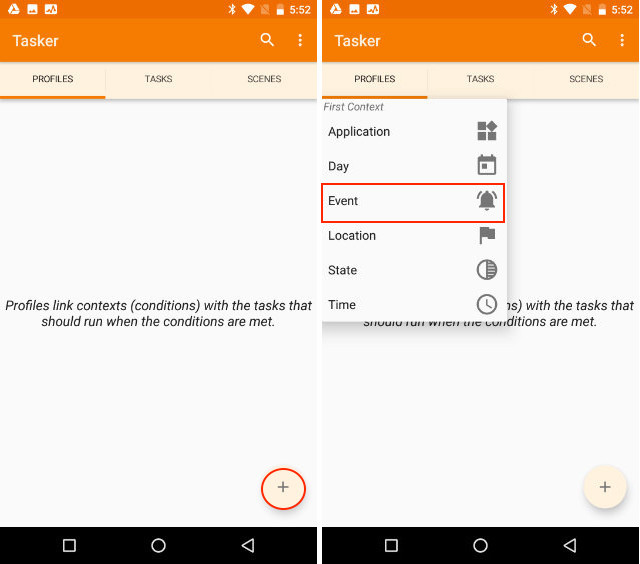 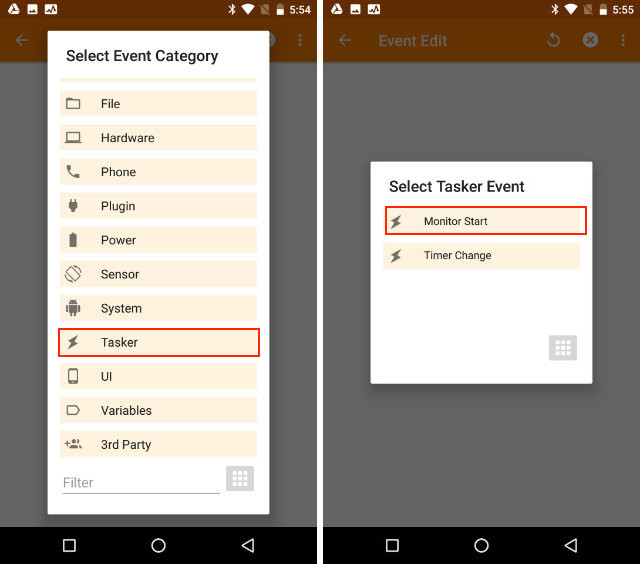 7. Press the back button and then select the “Snooze” task that we already imported. Once you have done that, Tasker will stop any persistent notifications from showing up on your smartphone. 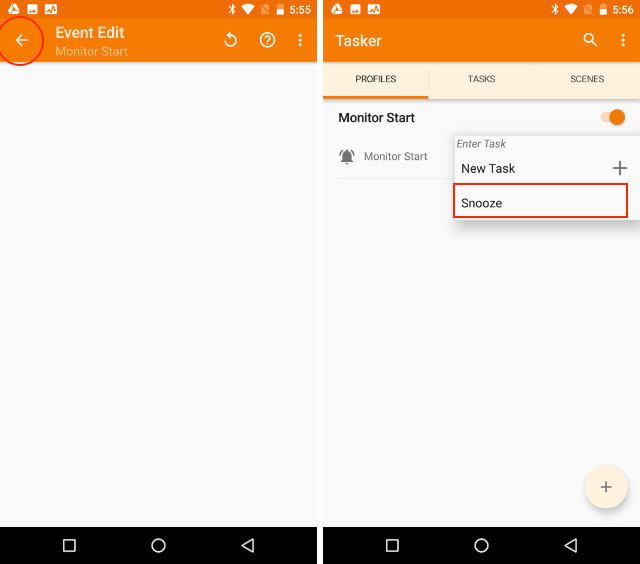 What really happening here is that the Tasker profile we created snoozes the “app is running in the background” persistent notifications for a very long time (some thousand of years). This ensures that, you won’t see that notification ever again.

Some of the users are also complaining about getting lower screen-on time after updating their devices to Android Oreo. Although I haven’t experienced this problem on my device, if such a problem persists, you will have to wait for a proper update to fix this problem at the OS level. In the meantime, you can extend your smartphone’s battery life by using the extensive battery optimisation options provided in Android Oreo.

1. To manage your battery settings, go to Settings->Battery and you will find a whole lot of options here. 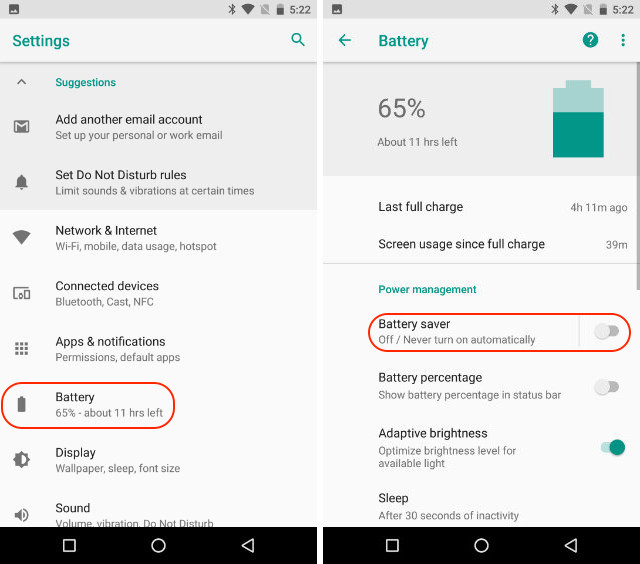 2. Here you get the option to enable the Battery saver, set the sleep time, and restrict app’s background process by using the “Force Stop” button. 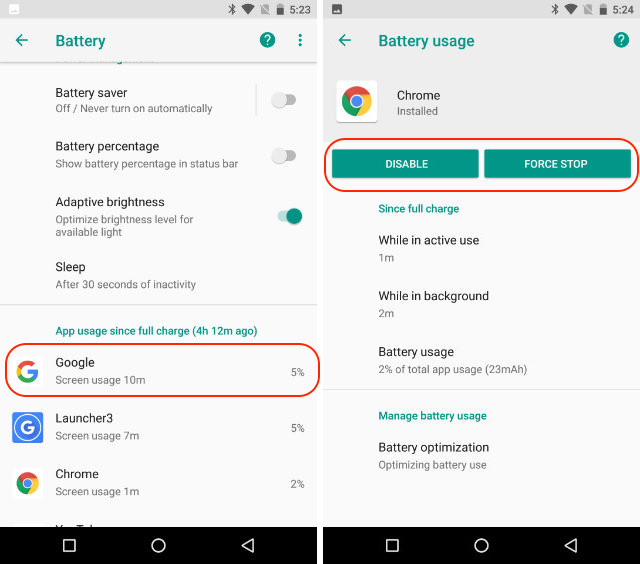 The article covers all the major issues reported by users who have installed Android O on their respective devices. Although, there are some other issues too, but since they are not that widely reported, they did not make the cut. If you are also experiencing any such issues which are not on the list, let us know in the comments section below. We will try our best to find their fixes and add them there. If too many of you report the same problem, we will update the article to include the fix.