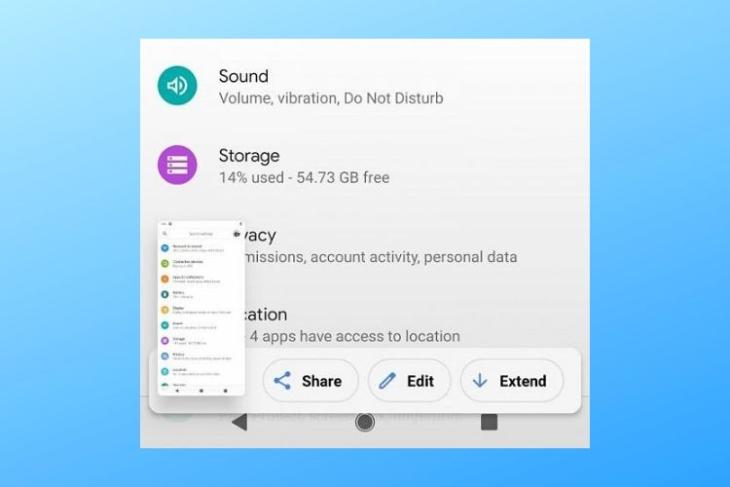 Android 11 is rumored to be officially unveiled later in September with a string of new features. This includes conversation bubbles, media controls in quick settings, privacy enhancements, and more. One of the features that we were excited to see finally make its way to Android is scrolling screenshots. However, it seems like the feature will not be available in Android 11 afterall.

Several custom ROMs and skins, including Samsung’s OneUI and Xiaomi’s MIUI, have offered the scrolling screenshot feature for a couple of years. Users have been pestering Google to add this feature natively to stock Android ever since. We saw a glimmer of hope when Google’s Dave Burke took to Twitter to reveal that the company will finally deliver on this request in Android R.

And Google is indeed working on it. Evidence for the scrolling screenshots feature was spotted in the first Android 11 developer preview that was rolled out back in February. The screenshot UI included an ‘Extend’ button (as shown in the image above, courtesy of XDA Developers) next to Share and Edit. It wasn’t functional though.

We expected the feature to arrive in an upcoming beta release. But, in a recent AMA on Reddit, the company has squashed this dream of ours. It revealed today that scrolling screenshots ‘didn’t make the cut’ for Android R.

I know, you are disappointed. You are probably looking to third-party ROMs that have added this feature years ago. But, Google has offered an explanation. The direct answer is offering a feature that is implemented well and not broken due to limited resources that the Android team is currently working with. The COVID-19 pandemic sees Google employees working from home and the team has to prioritize its resources and feature implementations.

“Rather than cranking out a quick hack that works for one or two hand-picked apps on a particular device, our goal on the platform team is to build this in a way that any app can plug into, whether they’re using a bog-standard RecyclerView or have implemented their own OpenGL-accelerated scrolling engine,” explains Googler Dan Sandler during the AMA.

So yeah, the rumored September 8th Android 11 stable release won’t support scrolling screenshots. It will arrive next year with Android 12 as Sandler says we should expect the feature in “a future API bump” during the AMA.