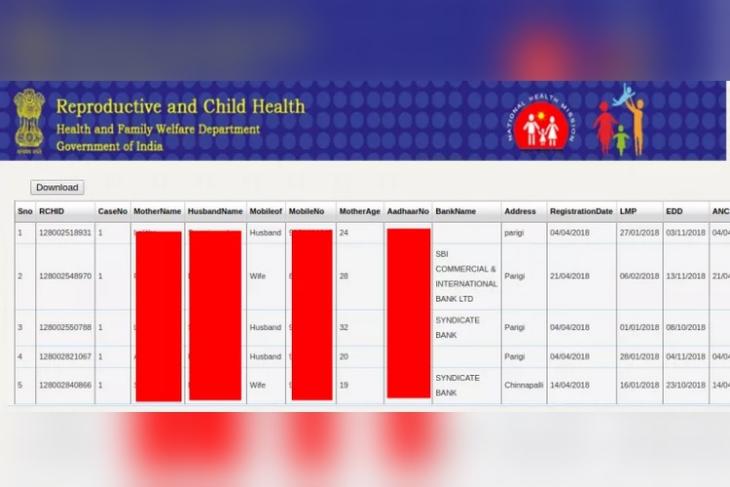 It appears that the stream of Aadhaar data leaks is not going to stop anytime soon. Last week a government website in Andhra Pradesh leaked Aadhaar data of around 7 million children, and just a few days after that another state government portal leaked the Aadhaar details of over 10 million social scheme beneficiaries. But the latest leak, again coming out of Andhra Pradesh is way more invasive and disconcerting as it compromises the medical history of pregnant women, along with their Aadhaar data and personal identification details.

Independent security researcher, Srinivas Kodali, discovered the new data leak and found that government websites in Andhra Pradesh have openly published the Aadhaar data of around 20,71,913 pregnant women, alongside details about their reproductive history, vaccination details of the infants, and a lot more.

Andhra Pradesh has been publishing around 20,71,913 #Aadhaar numbers of pregnant women and recent mothers during the period of from 2015-2018. While govt has legitimate interest in collecting this data for helping track mortality rates. The linking with Aadhaar and sharing is bad pic.twitter.com/juNFaLbr1x

The data was listed on the websites of the state-sponsored Nutrition and Health tracking system and the Reproductive and Child Health (Health and Family Welfare Department) portal run by the state government. The data listed on the websites contained complete details of the reproductive history of over 20 million pregnant women, which included information such as details of childbirth, risk status, follow-ups or whether the foetus was aborted.

The whole data was listed in the form of geographically arranged indexes, which also contained Aadhaar number and contact information of the people listed in the database i.e. eligible couples, pregnant women and young children.

The more worrying aspect of the new incident is that the data leaked from other government websites earlier can easily be merged to create a detailed profile of a woman’s personal and financial background i.e. whether she avails government welfare scheme, if she has more than one children, the health status of her children, bank account details and a lot more.

Another concern is that issues such as extramarital or premarital pregnancy or abortion can pose a significant safety risk to many women in India.

Kodali pointed that Andhra Pradesh has become a hotbed of sorts for Aadhaar data leaks, and the databases of government websites continue to leak a huge amount of sensitive data. “I am focusing on Andhra Pradesh specifically because they are collecting too much information and they have been publishing it for a long time”, he said.