Building upon its lineup of accelerated processing units (APUs), AMD has now announced a new partnership with three of the largest PC manufacturers. AMD announced that its APUs comprising Ryzen PRO processors hooked up to Radeon Vega graphics will now be available on premium desktops and laptops from Dell, HP, and Lenovo.

AMD clarified that these new offerings are for business as well as desktop users. This is because these AMD Ryzen Pro mobile and desktop processors come with a built-in security feature called “GuardMI” at the chip level itself which consistently prevents against cyberattacks without depending on any installed program or even the operating system. The feature includes memory encryption and image stability and this should address the fears of IT managers. 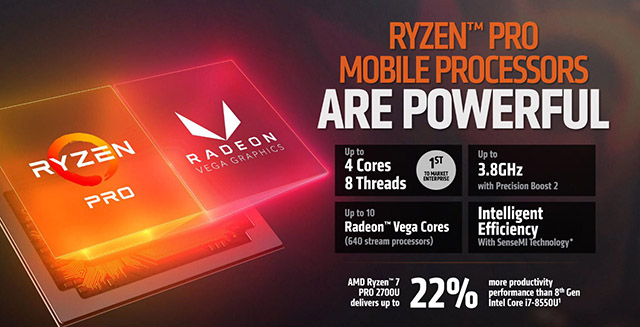 These APUs are currently available in the several business laptops by the three OEMs which were unveiled during an event last week. These include Dell OptiPlex 5055, Dell Latitude 5495, HP ProBook 645 G4, HP EliteBook 700 G5 series, HP EliteDesk 700 series, Lenovo ThinkCentre M715q and M725s, and Lenovo ThinkPad A series. All of these laptops and desktops can be equipped with any of the Ryzen Pro APUs.

AMD says that these Ryzen PRO processors based on its popular “Zen” architecture are designed for the dynamic market and address the business as well as multimedia requirements of the enterprise users. “The new multi-core design of Ryzen PRO processors delivers amazing performance on Windows 10 PCs, while the ‘Vega’ graphics architecture enables a smoother and richer visual experience, ideally suited for today’s modern commercial environments“, said Roanne Sones, GM, Strategy and Ecosystem for Windows at Microsoft.

Laptops with these APUs, as per AMD, will offer “desktop-class performance” and up to 16 hours of battery life. At the same time, the APUs for desktops will endure through graphics-heavy commercial applications like 3D CAD or medical imagery – naturally, handling basic office tasks will not be a hassle.