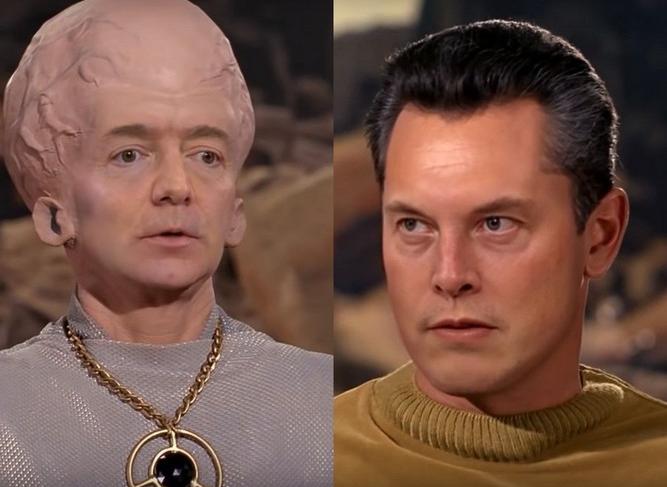 Using AI to create deefake videos have become a common practice in various political campaigns and spreading fake news all over the web. However, using the same tech to put the CEOs of Amazon and Tesla in a scene of the popular TV series, Star Trek seems harmless and fun.

In a video shared by a YouTube channel, The Fakening, the creators used deepfake technology to feature Tesla CEO, Elon Musk as the Fleet Captain, Christopher Pike and Amazon CEO, Jeff Bezos as an alien in a scene from the pilot episode of Star Trek.

Although the scene is from the first episode of Star Trek that aired on September 8, 1966, this video is in 1080p resolution. The producers also added a piece of background music from the YouTube audio library to enhance the scene.

Both CEOs seem to fit quite fine in their roles. In the 1-minute scene, Bezos, who is an alien with a bulbous head from the planet of Talos is seen to threaten Musk and capture him. While Musk being the fleet captain prefers death than being captured.

Amidst all the deepfake videos created to manipulate people on the web, these type of videos show that the technology can be used to create harmless and entertaining content. It just depends on the users of the technology and how they use it.

The CEO and co-founder of deepfake startup, Synthesia, Victor Raparbelli had this to say about the video, “I think this is a great example of the current state of the art in highly realistic face-swapping. Results like these still require lots of custom work and artistry along with significant expense on compute power (I’d estimate $100-300) but it’s in the hands of passionate individuals, not companies.”