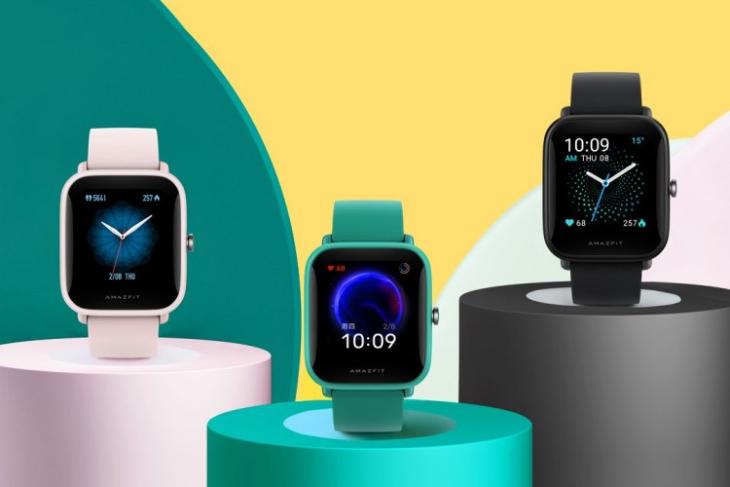 [Original article | April 2, 1:57 PM] – After launching the GTS 2e and GTR 2e in India earlier this year, Huami is gearing up to unveil a new budget-centric Amazfit Bip U smartwatch in the country. The Xiaomi-backed company launched the Amazfit Bip U in mid-2020. Now, it has confirmed that the Amazfit Bip U Pro is launching in India as early as next week.

Here’s a quick rundown of the key specs and features of the upcoming smartwatch.

The smartwatch boasts the same design as the Amazfit Bip. The square-shaped body is made of polycarbonate with the display curving at all four corners. This gives it an Apple Watch-like design.

On the front, the device features a 1.43-inch TFT color display with touch support. It is similar to its predecessor and also comes with an anti-fingerprint coating.

Now, apart from SpO2 monitoring and 60+ Sports modes like its predecessor, the new features in the Amazfit Bip U Pro are built-in GPS and support for Amazon’s Alexa voice assistant. So, with the Amazfit Bip U Pro, users can navigate around and ask Alexa for anything to get an appropriate response right from their wrists.

Furthermore, it comes with 50+ watch faces in addition to the support for creating your own watch face via custom images. It has a 5ATM rating for water resistance and comes with high-precision heart rate monitoring, blood oxygen level monitoring, sleep-quality monitoring via the SomnusCare algorithm, stress monitoring, and also female health tracking features.

Inside, there is a 225mAh battery, which is the same as the Bip U. Huami claims that the watch can run for 9 days on a single charge with standard usage. The device comes in three color options – Black, Green, and Pink.

However, you can check out Amazfit’s microsite on Amazon to get more details on the upcoming smartwatch. Moreover, you can register to get notified when the smartwatch becomes available to buy.

As promised last week, the company has officially announced that Amazfit Bip U Pro has been priced at Rs. 4,999 in India. It is now up for pre-order via Amazon India and the company’s online store. It will start shipping next week.