Under intense competition from Reliance Jio, Bharti Airtel has started offering one year of Disney+ Hotstar VIP subscription to its Platinum Postpaid and broadband users. The offer, which can be availed through the Airtel Thanks app, is available to select customers subscribed to postpaid wireless plans worth Rs. 499 or above, and broadband users subscribed to the Rs. 999 plan and above. Airtel users can check their eligibility on the ‘Thanks’ page of the aforementioned app.

It is worth noting that Airtel has already been offering users the Disney+ Hotstar VIP subscription for free with many of its prepaid wireless plans, including the Rs. 401, Rs. 448, Rs. 499, Rs. 599 and Rs. 2,698 vouchers. The Rs. 401 recharge is a data-only plan that offers 30GB of total data for 28 days, while the rest are combo plans with voice, data, and SMS benefits. 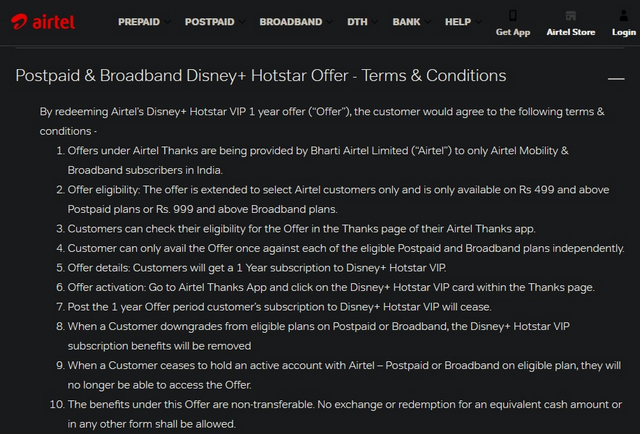 Meanwhile, Jio has also been offering Disney+ Hotstar subscription with a number of its prepaid recharges over the past few months. The company, back in August, launched two new plans priced at Rs. 499 and Rs. 777 with one-year of Disney+Hotstar VIP, bringing IPL 2020 streaming at no extra cost. The offer is also valid on a whole bunch of other plans, including a few combo recharges and several data vouchers.