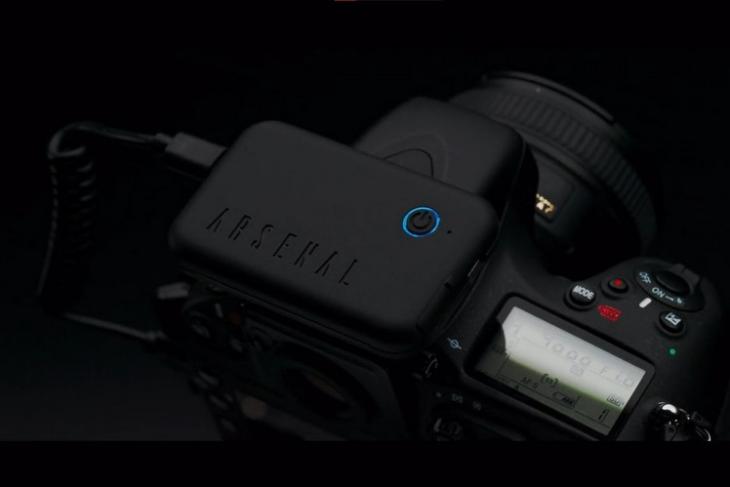 Whether you are a casual photographer with an entry-level DSLR or a pro with a high-end one, capturing a perfect shot can sometimes become difficult. You have to tweak various elements of your camera to match the lighting of your scene and then also you might not end up with the picture that you imagined. So, to help you capture a perfect shot, there is now an AI-powered camera assistant called the “Arsenal 2”.

Developed by a software engineer who is also a photographer, the “Arsenal 2” is the second iteration of the “Arsenal” that released back in 2017. It is essentially a camera assistant that uses artificial intelligence (AI) to manipulate the camera settings for a picture-perfect image of a scene.

The compact device connects with your mirror-less or DSLR camera via USB and sits firmly on top of it. You can also download the dedicated app on your smartphone to access the photos that you captured with your camera and instantly share them on various platforms.

A One-for-All Tool to Handle Your Camera Settings

Now, “Arsenal 2” is designed to be a set of tools specifically to handle the technical settings of your camera. This gives you the opportunity to work more on the composition of your image, while the camera assistant handles all the camera settings like shutter speed, aperture, and ISO.

With one tap on your smartphone, the “Arsenal 2” uses a “state-of-the-art” machine-learning algorithm to tweak the settings of your camera to capture a scene. Following this process, the device fine-tunes the settings further by analyzing 22 different factors to give you the best possible picture of a scene.

Now, the highlighting feature of this second-gen device is the new “Arsenal Deep Color”. According to the creator, the team worked for two whole years to come up with a neural network that can take RAW data of a scene and convert it into a beautiful image with perfect lighting.

The AI-powered feature can capture more details of a scene by tweaking the necessary settings of your camera. It adds more details, improves the HDR, and provides the perfect moods for your pictures.

Below are a few examples showcasing the difference between a standard image and an image shot with Arsenal’s “Deep Color”.

Apart from “Deep Color”, the “Arsenal 2” comes with many other useful features for your camera. It can help you capture flawless night scenes with its “Night Assist” feature, it can remove people or objects from images with its “Crowd Control” feature and it can also stack images of varying exposures with its “Image Stacking” feature.

The company is currently running a Kickstarter campaign for the device and it has already raised over $1.6 million from 8,730 backers. The device has two versions – the Standard version and the Pro version.