In the world of image editing software, Adobe Photoshop reigns as the supreme king. The image editing tool, which is one of the most popular software available, is widely preferred by designers, illustrators, photographers, and more. Now available as part of Adobe’s Creative Cloud, the software offers its users with plenty of features and tools for designing as well as editing the perfect image. The company recently rolled out the 2018 update for the software, adding forth some new tricks to the already successful software. But how does the new update impact Photoshop, and does it change the user experience completely? Let’s find out, as we take a closer look at Adobe Photoshop CC 2018 in our in-depth review:

Note: The following review was performed on the Adobe Photoshop CC 2018 version 19 update.

Well, now that we’ve got that out of the way, let’s see what the latest version 19 brings to the table.

One of the biggest additions to Photoshop CC 2018 is the fact that it now supports variable fonts. I’ve lost count of the number of times when I’ve had to switch my fonts simply because of the limitations of bolding and slanting. However, with the new 19 update for Photoshop, you can quickly and easily customize styles by using inbuilt sliders to move between the different weights and thickness of a type family.

This comes as a nice touch, since Photoshop has recently been receiving a lot of flare from the users, due to its lower interest in typesetting capabilities, as compared to the company’s other designing products, such as Illustrator or InDesign. As such, it is nice to see Adobe now include more features into Photoshop, allowing users to use just a single software for the majority of their designing needs. 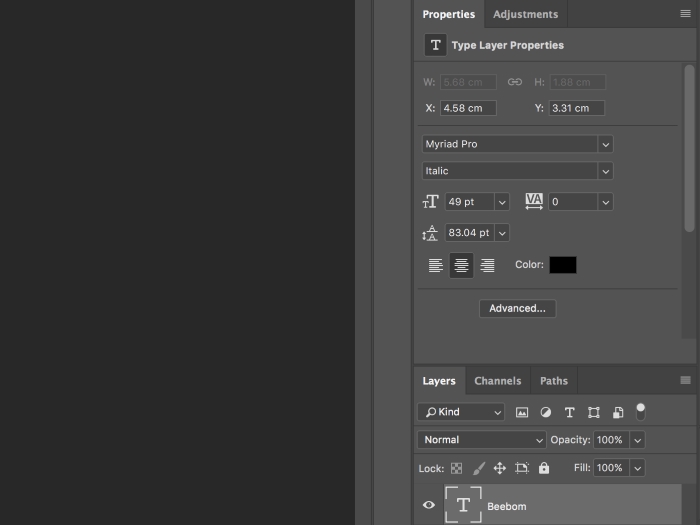 It is worth noting that this new variable fonts feature is compatible only with OpenType fonts, and not TrueType fonts. That being said, the typefaces aren’t warped or transformed when utilizing Variable Font. In fact, Adobe has worked with type foundries and designers to make sure that all the typefaces maintain their correct structure when utilizing the variable font options, ensuring that every character looks crystal clear.

As is the case with every update to Photoshop, the AI on the software has gotten smarter. In fact, with the new version 19 update for the Photoshop CC 2018, Adobe has added a Select Subject feature. Basically, Select Subject lets you select the most prominent subject in an image in a single click. Making use of advanced machine learning, Adobe claims that the feature is trained to identify a variety of objects in an image—people, animals, vehicles, toys, and more.

Accessing the Subject Selection feature is pretty easy too. Simply head over to Select -> Subject, or, while using the Quick Selection tool, click Select Subject in the options bar. Either way, you can use the Select Subject tool to easily select the subject in the image. However, it is worth pointing out that since this is advanced machine learning, it will only get better with time. In my usage of the feature, while it worked well for most images, the software failed to recognize the subject accurately when it was used against images containing multiple subjects. 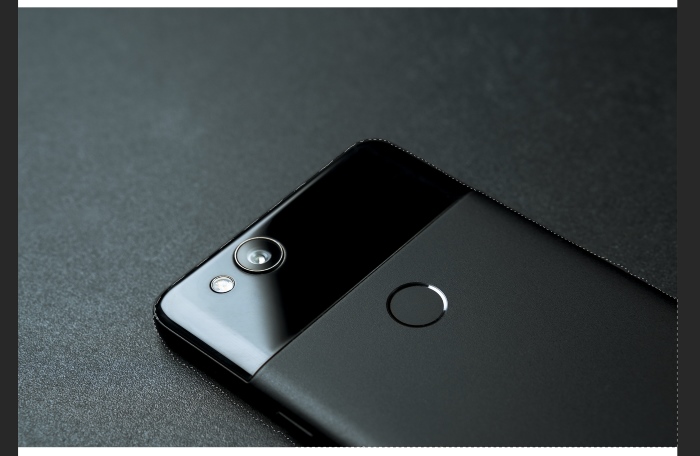 Undoubtedly, Photoshop offers a plethora of features for its users. In fact, it is the most feature-rich and advanced image editing tool out there. Combined with the rather clustered toolbox and overall UI, learning the tool can prove to be a hassle for most aspiring new users. Thankfully, Adobe understands that and has provided a new feature in Photoshop CC 2018, which allows the user to learn the software from within the app. 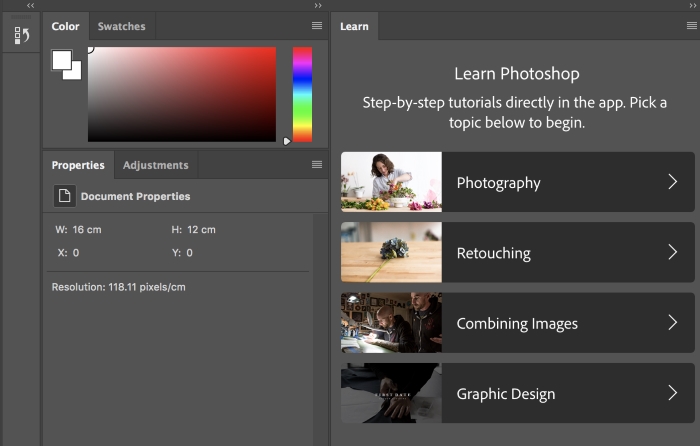 While there are multiple online courses that offer you knowledge on how to get started with the basics of Photoshop, Adobe’s new “in-app learning” feature should make the process all the more seamless and easier for you. Photoshop CC 2018 provides annotated steps using its own sample images covering categories like Photography, Retouching, Combining Images, and Graphic Design, each containing three to five instructional modules. 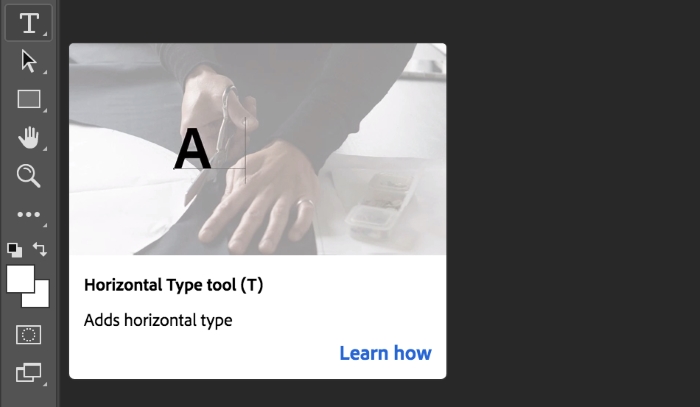 Additionally, the software also packs in the Rich Tooltips feature, which demonstrates how each tool in Photoshop works. That being said, the feature might sound rather obtrusive than helpful to users who are already familiar with the software. As such, advanced users have the option to disable the feature in the Preferences.

As an illustrator or a designer, the brush tool is undoubtedly one of the most prominent and widely used tools in Photoshop. With the Photoshop CC 2018 version 19 update, Adobe has also overhauled its brush-related features and developed plenty of new tools for you to try and design the perfect image, such as:

Paints only when the string is taut. Cursor movements within the smoothing radius leave no mark.

Allows the paint to continue catching up with your cursor while you’ve paused the stroke. Disabling this mode stops paint application as soon as the cursor movement stops.

Completes the stroke from the last paint position to the point where you released the mouse/stylus control.

In addition to all the aforementioned brush features, the new Photoshop CC 2018 also brings forth better brush organization. You can now organize brush presets into folders and nested folders, while also managing brush tool presets directly from the Brushes panel. Furthermore, you can also save any customized Brush tool presets into an actual brush preset, while keeping all of its attributes – such as opacity, blending mode and so on.

As someone who has been a Photoshop user for almost 5 years now, the Photoshop experience has always been great. Yes, the software does demand some hefty hardware for optimal performance, but the results produced are great, and limited only by one’s imagination. The new Photoshop CC 2018 version 19 update brings forth plenty of useful features to the software, making it all the more robust and better performing. 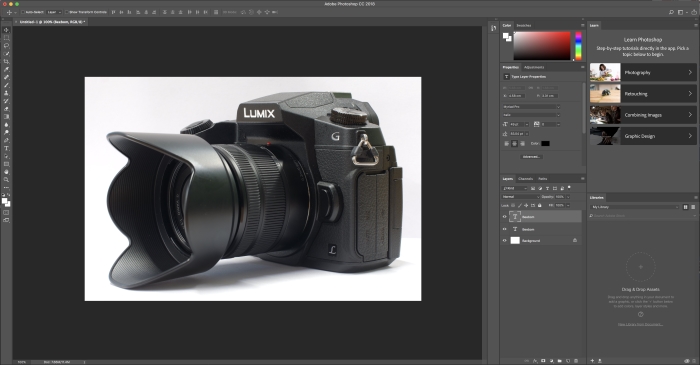 The new update runs comparatively smoother on a wider variety of devices now, thanks to the under-the-hood optimizations. Also, one of the major issues with Photoshop has been the learning curve to it, which is quite steep. However, with the new in-app learning feature, new users can get accustomed to the plethora of features that Photoshop offers in no time.

What’s more, is that it comes as part of the Photography Plan, which means you get access to Lightroom CC and Lightroom CC Classic, and an additional 20GB of cloud storage, for no extra cost. You can check out the full details of the pricing here.

Similar to every update in the Creative Cloud release, version 19 is another incremental update. However, additions such as Variable Fonts and new brush control features make Photoshop, which was already the best photo editing software out there, even more powerful. One might argue that for the basic photo editing needs, Photoshop might be an overkill. However, if you want to attain professional grade edits, Adobe Photoshop CC 2018 is essential to your success. Plus, the new attractive prices make the software and even more lucrative deal.

The Adobe Photoshop CC 2018 thrives on the formula of evolution over revolution. It is more of an incremental update, delivering great new additions to an already successful formula. The new update also brings forth under-the-hood optimizations, which have helped the software to perform better on a wider array of devices. While the inclusion of Lightroom CC into the Photoshop software might seem to be a controversial topic, there is not much to complain about the new version 19 update for Photoshop CC 2018. At the end of the day, Adobe Photoshop CC 2018 remains the best image editing tool out there, and a must-have software if you intend to master your image editing skills.

Adobe AI Can Tell Photoshopped Images From Real Ones