If you’ve seen the Predator 21 X laptop from Acer, then you probably know how far the company can go in differentiating their gaming laptops. Ever since the Predator 21 X came out, people have been expecting similar crazy stuff from them. Yesterday, Acer held a product launch event at the world’s largest IMAX screen in New York City to announce a slew of products. One of them looks like a trimmed down and much more affordable variant of the Predator 21 X gaming laptop costing $9000. Meet the all-new Acer Predator Triton 700 gaming laptop.

At first glance, you might think it’s just another gaming laptop, but once you open it up, you’ll see the keyboard weirdly placed at the bottom, just like the Predator 21 X. But, where’s the weird trackpad that we were talking about, you may ask? Well, there’s a transparent glass panel which lets you see the components inside. This doubles up as a trackpad, and it’s made of Corning Gorilla Glass.

It will sure take a while, until you get used to this new trackpad, and believe me, it’s going to be pretty hard. Well, for starters, you can’t click (only tap) on it and there’s no force touch feedback feature like the one you’ve seen on MacBooks. Assuming you’d be buying this laptop for gaming purposes, you will probably be using your dedicated gaming mouse along with it, so there’s one less thing to worry about. 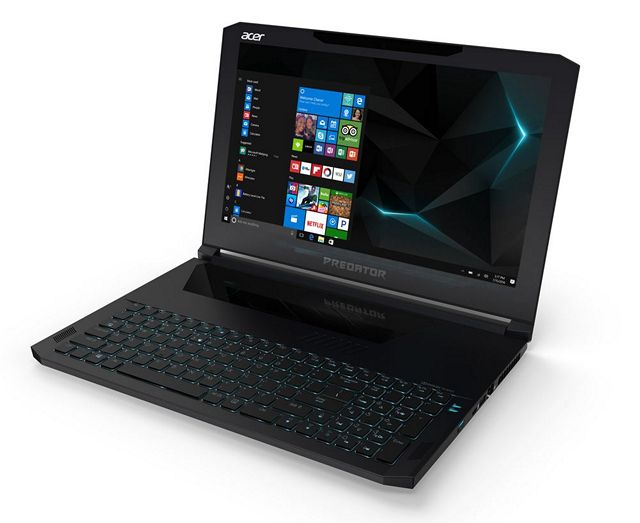 At 18.9 mm, it’s very thin, considering it’s a gaming powerhouse. At this thickness, the Triton 700 directly targets some thin gaming laptops like the Razer Blade and MSI GS63 VR Stealth Pro. However, the laptop is slightly on the heavier side at 2.6 kg, but that surely makes up for the specs it offers.

The Triton 700 boasts a 15.6-inch Full HD display, up to 32GB of DDR4 DRAM, and two PCIe SSDs. It can be configured with either an Intel Core i7-7700HQ or a Core i5-7300HQ CPUs, and with Nvidia’s GeForce GeForce 10-series GPUs. Acer is not being specific on which graphics card this laptop will be powered by, but we’re expecting nothing less than the desktop-class GTX 1060.

The laptop will carry a hefty price tag starting at $2999 and will start shipping in August. So, what do you think about the new Triton 700? Can it be an affordable alternative to the Predator 21 X? Do let us know in the comments section down below.