Skip to content
Home Mobile Android 91 Launcher Pro for Android: Much More Than A Launcher App

If you are an Android user, you’d know that you can totally customize the OS to make sure everything works the way you want. When we are talking about customization on Android, “launchers” aka the homescreen replacement apps are the first thing to come to mind. There are a number of great launchers available on the Play Store but if you are looking for a launcher that not only brings the customization features but also brings some handy additional features, you can try out Mobo Live Team’s 91 Launcher Pro.

91 Launcher Pro for Android brings a variety of customization features along with tools built-in that people generally install as separate apps from the Play Store. So, if that sounds interesting, here’s our review of the 91 Launcher Pro app for Android.

91 Launcher Pro brings a plethora of cool features. So, let’s start by talking about the best features of the app: 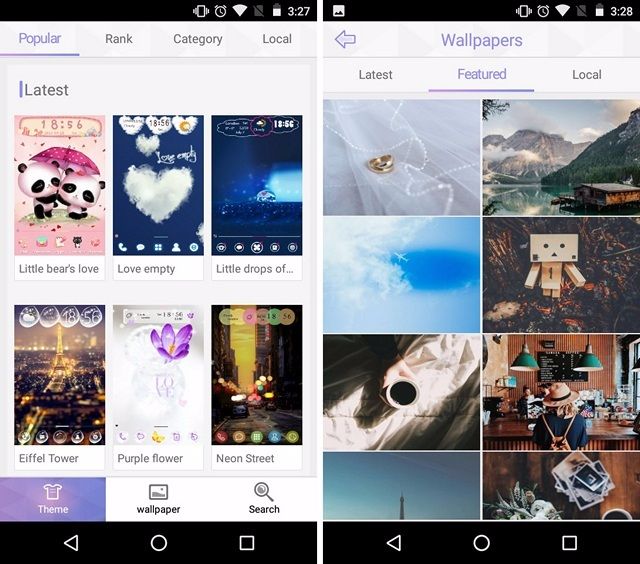 Yes, that’s what the folks at Mobo Live Team have decided to call their “Effects” feature in the 91 Launcher Pro. While we have no idea why it’s called that, 3D Touch aka Effects brings you some really cool animations for transitions like touch, desktop, list and list in/out. There are various cool effects and we especially like the effects for touches. 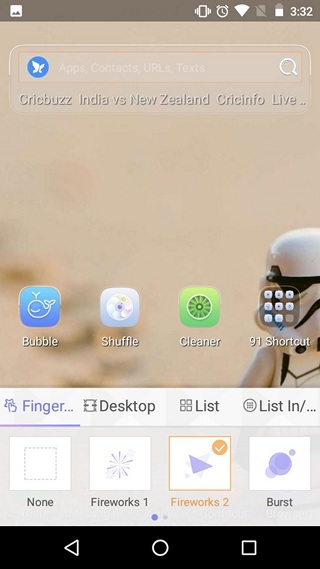 91 Launcher Pro also lets you totally customize the icons of any app. You can just use the replace option in any app icon to change its icon with ease. You can use icons from other themes or you can create your very own icons with your pictures. Now, that is cool! 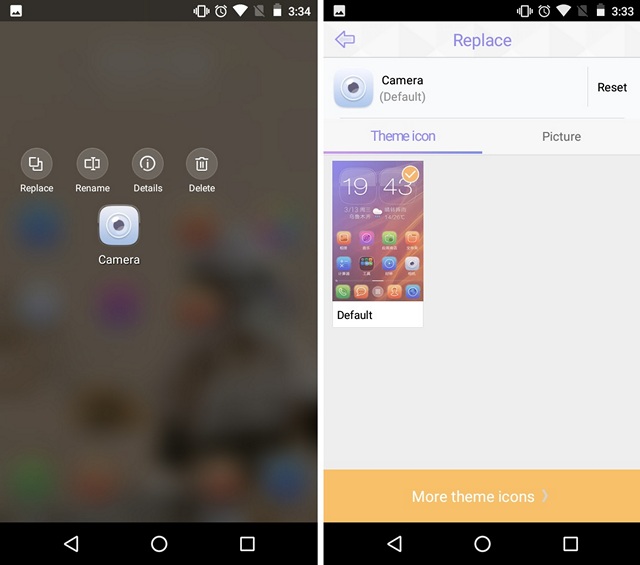 Like the Google Now page on the homescreen in the Google Now Launcher, 91 Launcher Pro brings its own page for global searches. Along with searching for anything locally or online, the page also shows you the popular websites, app & games recommendations and trending searches. 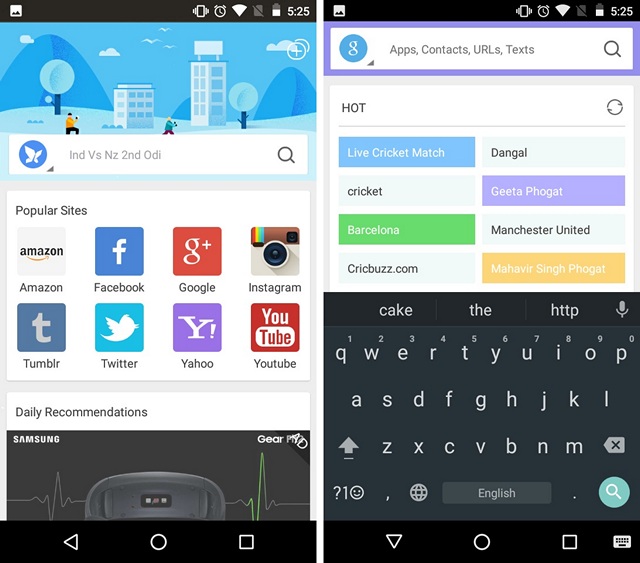 91 Launcher Pro also brings some features aimed at protecting your privacy. First off, you can hide apps, so that no one is able to access your personal apps. You can create hidden folders too. 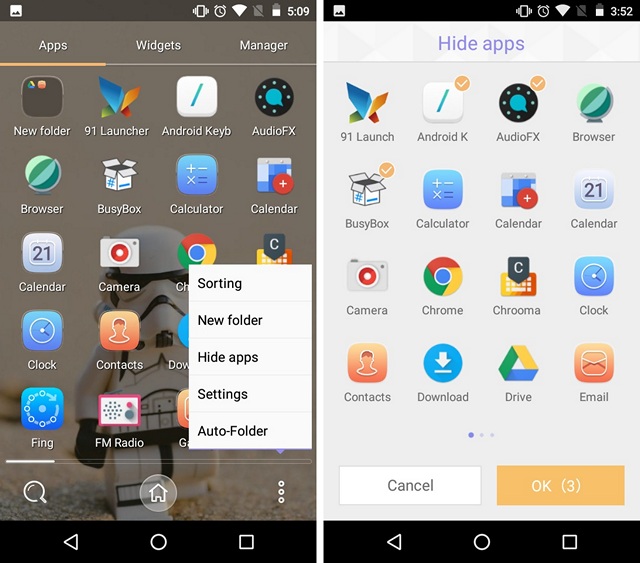 While the 91 Launcher Pro app does not bring a ton of gestures, it brings the pretty handy swipe up, swipe down and 2-finger swipe-down gestures. You can set custom actions like launch apps, shortcuts or search for the three gestures. 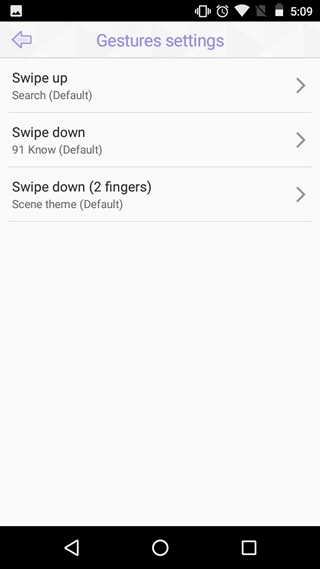 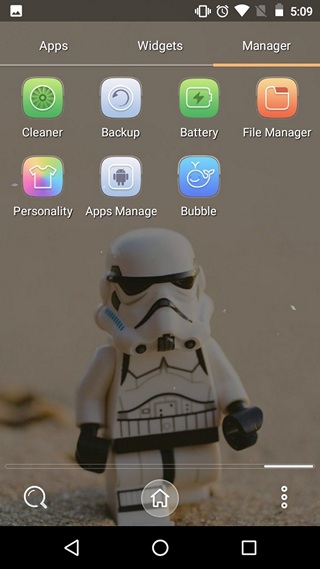 If you are like glossy icons and over the top effects on your Android homescreen, you are going to love the 91 Launcher Pro. The launcher brings uniform icon styles for stock apps, which offers a very streamlined look. Along with that, you can always choose from the tons of wallpapers and themes to have a look that you like. While some themes are good, some do feel outdated. Also, we don’t like the fact that there’s a home button in the app drawer, considering Android smartphones do have a home button. 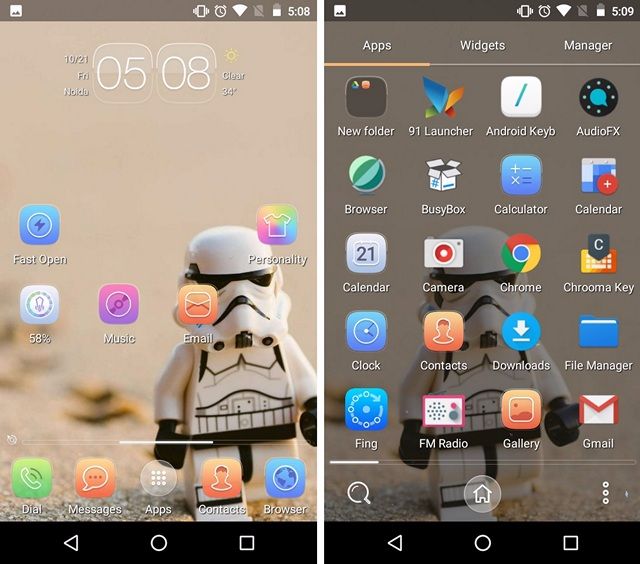 The UI in the app settings or preferences is pretty simple and straightforward. When it comes to the UI of other tools like Cleaner, Apps Manager etc., it’s good and if you like simple interfaces, you will like it. Overall, we like the UI and you will like it too and if you don’t, you can always customize it to your liking.

When it comes to usage, we liked the fact that 91 Launcher Pro works like a charm, even on modestly powered devices, which is great. Also, most of its features, like themes, wallpapers, effects, tools etc. work pretty well. However, the various settings of the apps are divided into different pages like settings, preferences, effects etc., which makes up for a slightly confusing experience. Also, not everyone appreciates app recommendations and the 91 Know feature too can be a little annoying but the good news is you can turn it off. 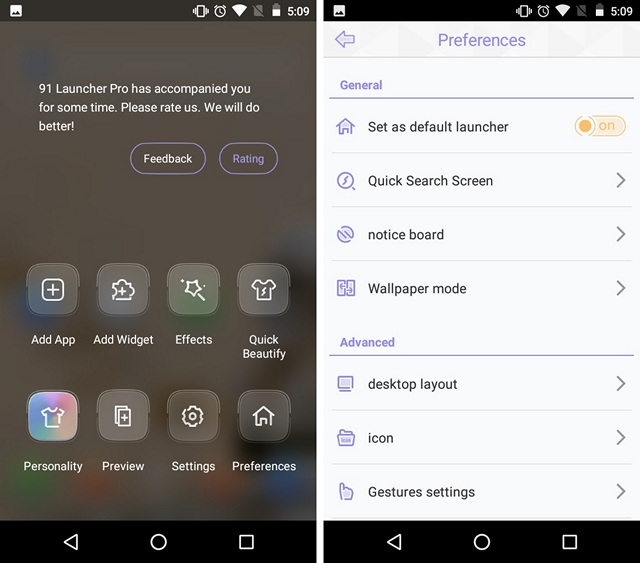 To sum things up, the 91 Launcher Pro is an easy to use launcher app for Android. Some of its options might be scattered but once you get the hang of the app, you should have no problems.

If you are looking for a feature rich launcher, which also performs well, the 91 Launcher Pro should be a great choice. Ignoring the slight niggles, the 91 Launcher is a pretty capable launcher and it should get even better with future updates. We especially like the icon customization feature and the various themes & wallpapers it offers but what about you? What are the features you like in 91 Launcher Pro? Sound off in the comments section below.