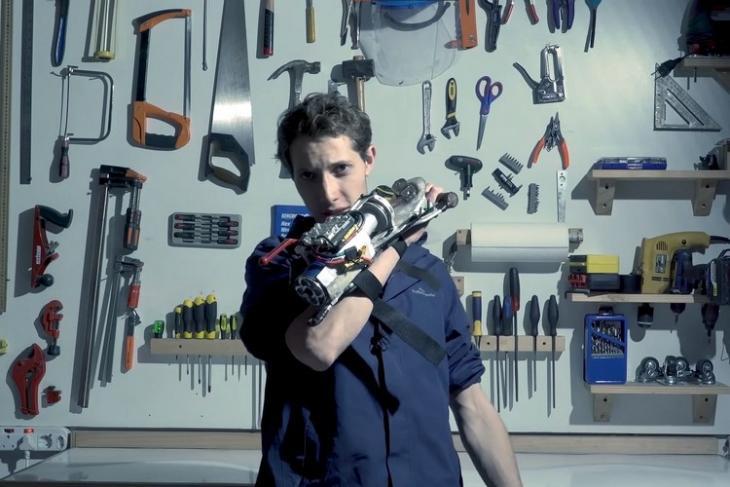 Even though modern technology is pretty advanced and all, real-world gadgets cannot generally match the capabilities of fictional tech gadgets. Have you seen anyone swinging around the city using a grappling-gun at night? Well, considering your distant uncle is not Bruce Wayne, I’ll say neither have I. However, you might see one now, as a DIY YouTuber recently made a working model of the grappling-gun that actually works.

The grappling-gun, if you live under a rock, is one of the most popular fictional gadgets of all time. It is used by Batman, in the movies as well as in the Arkham games, and in various other popular video games like Just Cause and Apex Legends (Pathfinder has one). These various iterations of the same gadget inspired JT, the host of the YouTube channel Built IRL, to build his own version of the grappling-gun.

A DIY Grappling Gun for Normies

After working on the project for a whole year, the guy was finally able to build a working grappling gun that can throw a rope with a hook and shoot him up into the air. It looks pretty advanced and indeed it is as the YouTuber used some clever engineering skills to make this unique gadget.

Now, JT is not the only one who made a model of the grappling gun. In his video, he says that many DIY creators and even commercial companies have made the grappling gun in different forms. However, he also explained how his model is much more advanced than any of those in an array of ways.

For starters, the entire device is self-powered and sits on the arm of the user, unlike previous models that required users to strap an external battery pack in their belt area. It also features a CO2-based blasting system and a “very powerful” 10,000W motor that has enough horsepower to pull the guy up into the air.

Moreover, there is a tiny wheel that lets users control the speed and direction of the rope. As a result, unlike any other model, JT’s one can bring him back down to the ground after all the swinging.

However, despite being so advanced, there are some pretty concerning real-world problems of using this gun which they do not show in the movies and games. The YouTuber tried the gun various times and said that it is pretty hard to control because of the uneven weight distribution. Moreover, he also notes that this can only be tried out in a safe, contained environment, rather than in the real world.

You can check out the entire video to know more about this gadget right below.

Now, this is obviously a personal project and will not be available commercially anytime soon. However, if you are planning to become a night-time vigilante, then you can surely make one for yourself.