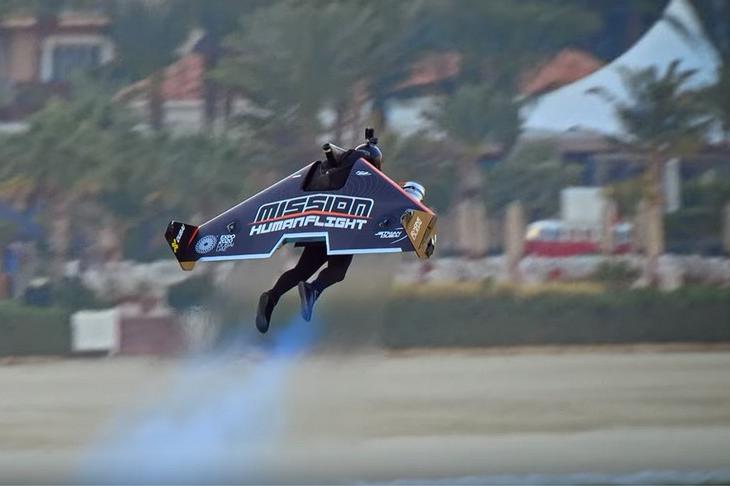 When it comes to flying, we tend to picture an aeroplane, a helicopter or if we are a tad bit futuristic, a flying car, maybe. However, the idea of flying in the air without being inside something is just plain insane.

The Dubai-based firm, Jetman, in their short film: Young Feathers, that was shared on YouTube back in 2015, showed two pilots flying around the skies of Dubai alongside the birds wearing Jetpacks with wings and jet engines on their back. The two pilots were Yves Rossy and Vince Reffet. Rossy, who was a Swiss Military Pilot went on to become an aviation enthusiast. He has been flying with a Jetpack on his back ever since.

Vince Reffet is a professional skydiver and was also the partner of Rossy. He recently took one of Jetman’s Jetpacks to set a new record by autonomously taking off from the ground and fly up to 6,000 ft. above the ground. In a recent video (below) from Jetman Dubai, Reffet carried a carbon-fiber wing, powered by jet engines on his back at the Skydive Dubai runway. After about 50 tests, using safety cables and fall arresting system, Vince was able to perform this stunt.

At the runway, Vince was first seen to take-off from the ground and hover above the Arabian Gulf waters for about 2 minutes. This was to test the movements of the jet-man using the newly improved Jetpack. After testing the controls of forward and backward movements, stops and turns, Reffet came back to the ground.

Right after coming back, the pilot took off from the ground again. Only this time not just to hover at low altitudes. The pilot rocketed off towards the Palm Jumeirah Beach Residence at an average speed of 240kmph. According to the blog post by the company, the pilot reached heights of 100m in 8 seconds, 200m in 12 secs, 500m in 19 secs and 1000m in just 30 seconds time. After performing a loop and a roll at 1,800m above the ground, Reffet opened his parachute at 1,500m and landed safely back at Skydive Dubai.

“We are so happy to achieve this incredible flight. It’s the result of extremely thorough teamwork, where each small step generated huge results.”, said the jet-man, after landing on the ground.

Previously, there was no way for vertical take-off and landing (VTOL) using these jetpacks. However, the work of three engineers – Mohammed Rashid Chembankandy from India, Andre Bernet from Switzerland and Matthieu Courtois from France, enabled the new jetpacks to perform VTOL. When Rossy and Reffet soared the skies back in 2015, they bungee-jumped from a helicopter before flying. This was because the jetpacks were not capable of VTOL, back then.

Now, as I am finishing this article, Elton John’s “Rocketman” started playing in my ears (sheer coincidence) from a random YouTube playlist. This reminded me of the time when I used “Rocketman” to get a jetpack to fly over the city of Las Venturas (in GTA: San Andreas, of course). Well, flying with a jetpack in a game is cool and all, but in real life, it is just mind-boggling.

NoiseFit Evolve 3 Smartwatch Launched in India; Check out the Details!