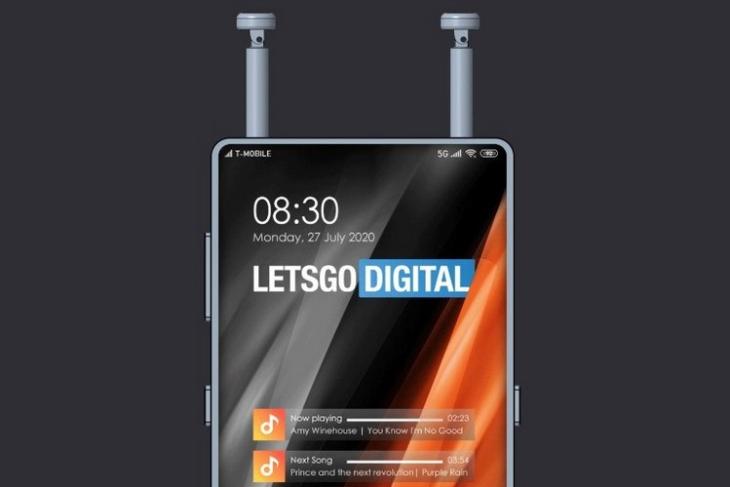 Xiaomi is a company that is not afraid to experiment with new technology for its products. We have seen the company come up with some unusual yet high-tech products like the Mi smart curtains or the EDON foldable fan. Now, according to a recent report, the company is working on a smartphone that can store and (probably) charge wireless earbuds inside it.

The report by the Dutch media house, LetsGoDigital, states that Xiaomi recently filed two patents in China and the Netherlands. These two patents hint at a smartphone that comes with two dedicated slots to store wireless earbuds inside the smartphone itself. If they could make this smartphone successfully, then it will be a goodbye to the charging cases that current truly wireless earbuds come with.

There aren’t any pictures to show how the design will look like. However, folks at LetsGoDigital have made a GIF render of a smartphone, based on the patents. Check it out below.

Now, as you can see in the image above, the earbuds go straight inside the phone through the two slots at the top. And according to the patent, these earbuds will also be designed to work as one of the primary speakers of the device.

The Barriers of the Design

Personally speaking, I kinda dig the design and love the fact that there will be no need for an external charging case for the buds. However, to achieve this, there some major barriers that Xiaomi has to consider.

Secondly, there is the factor of hygiene. Especially in these times of the pandemic, the Chinese company needs to think of a way to keep the buds clean as we keep smartphones in our lint-filled pockets most of the time. So, if the dust and other small particles get inside the slot and then into the earbuds, then the next time users put the buds in their ears, the dust will enter the users’ ears from the buds.

Apart from these, there are several other issues that might become major problems for this design. For instance, with this design, there will no chance of adding water-resistance to the smartphone, making it a rather weak device compared to other smartphones in the market.

However, I am sure that engineers in Xiaomi have thought about these issues. And when/if they release the smartphone in the market, these issues will be solved by then.