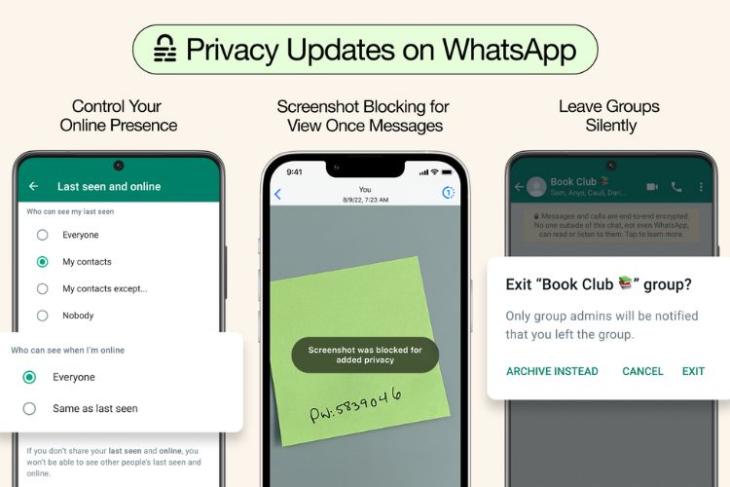 Over the past few weeks, we have seen reports of WhatsApp developing a myriad of new features for privacy concisous users. And today, the Meta-owned messaging giant has announced 3 such privacy features that will start rolling out to all users in the coming weeks. This includes the ability to silently exit groups, block screenshot capture for View Once photos in WhatsApp, and hide online status from the contacts of your choice. So let’s at each of these features in detail.

In an official press release, WhatsApp says it’s “introducing new layers of protection that enable users to speak freely and have private conversations.” The company has prioritized the above mentioned feature based on an independent privacy study, which concluded that nearly 47% are comfortable speaking in an honest, unfiltered manner in a safe and private space.

Moreover, around 51% users wish to keep their online status hidden whereas 91% users prefer using blocking features if educated about them. With that out of the way, here’s a closer look at each of the new features:

Apart from the existing ability to hide your “Last Seen” status in WhatsApp, the messaging app now lets you appear offline (or hide your online status) with ease. Once enabled, other users will no longer see the “Online” tag under your name/ phone number in chats, even when you are online and using WhatsApp actively.

When the feature is live, you will need to head to Settings -> Account -> Privacy -> Last Seen. Here, you will find the newly added “Who can see when I’m online” option. Check out this screenshot from tipster WABetaInfo to see what the feature looks like in action:

Annoyed with the constant chatter and good morning messages in family group chats? Well, you can now leave the group chat without notifying all users in there of your decision. “Now, instead of notifying the full group when leaving, only the admins will be notified,” states the messaging giant in its press release. This is an important privacy feature for WhatsApp users.

Finally, WhatsApp is introducing a feature that should have been there since Day 1 for “View Once” photos and videos. The company will now block users from capturing screenshots of disappearing photos and videos sent in conversations. The View Once photos are meant to be ephemeral, and the company now understands that, which is a good thing. This feature is currently being tested and will rollout soon.

So yeah, within the next few months, Meta (formerly Facebook) will bolster the privacy features in WhatsApp to offers user more control over their online presence. Which of these features are you most excited for? Tell us in the comments section below.