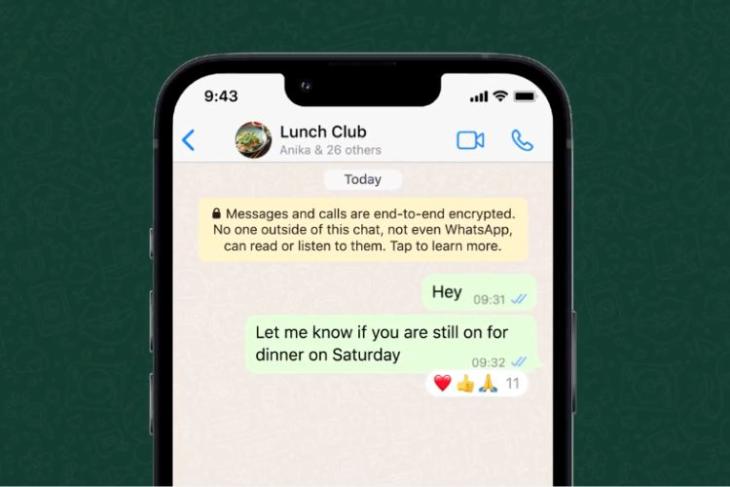 After numerous rumors and beta tests, WhatsApp message reactions finally became an official feature for the messaging platform earlier last month. And now, the feature has finally started rolling out for users on both Android and iOS. Here’s how you can react to a message on WhatsApp right now.

The announcement comes from a recent Facebook post by Mark Zuckerberg. Although, you should know that message reactions have just started rolling out, which means that it will take some time to reach all users globally.

I, for one, wasn’t able to access message reactions on WhatsApp at the time of writing. My colleague Uday was partially able to use them on WhatsApp for Web, but not on mobile. You can try updating the app to see if it has appeared for you. Meanwhile, here’s a look at what they look like:

Nonetheless, WhatsApp has still listed down the steps to send a message reaction, and it’s no rocket science! You just have to long-press a message you want to react to and select the emoji you want to use as a reaction, much like on Instagram and Facebook.

Currently, there will be six emoji options to choose from: thumbs up, heart, laughing face, surprised face, teary face, and hands together. More options are expected to be added as is the case with Instagram DMs.

The Meta-owned messaging platform has a dedicated FAQ page for message reactions, which brings up some noteworthy points. Firstly, you can only add one reaction per message but can always change the emoji reaction. For this, long-press the message again and choose another emoji you like.

It is also revealed that reactions to disappearing messages will also disappear after the specified time, and you won’t be able to hide reactions or reaction counts. Plus, another person could see your message reaction before you remove it or removal wasn’t successful. You can remove a reaction by long-pressing the message and tapping the selected emoji again. A notification for the removal of reactions won’t appear.

For those who don’t know, WhatsApp is expected to add emoji reactions to Status, which is already available for Instagram and Facebook Stories. Message reactions have started rolling out in addition to the 32-people limit for a group voice call on WhatsApp. The company is also expanding the group size up to 512 participants (via WABetaInfo). That means you can now add up to 512 people to groups, which is great.

So, have you started receiving the new WhatsApp message reactions? If yes, let us know your experience with it in the comments below.