Skip to content
Home What is What is QLED Display and How Does It Differ From OLED?

Display panel technology didn’t change a great deal in the last century, at least not at the consumer level anyway. Televisions and computer monitors all used the good ol’ CRT (Cathode Ray Tube) panels for decades, and even as the world migrated from monochrome to color, the underlying deflection coils and electron guns that brought you your favorite TV shows remained constant. Over the past decade, though, the older technology has been largely replaced by newer flat-panel display technologies such as LCD, LED and OLED, as their production costs have fallen significantly with the passage of time. However, as technology keeps evolving, new types of display panels are cropping up seemingly every other day, promising to revolutionize the way we watch television.

QLED, or Quantum Dot Light Emitting Diodes, is one such technology that has been in the public domain for a few years, but hasn’t caught the public’s imagination the way many had expected it to. However, some industry insiders, media columnists and market analysts now seem to believe that it is an idea whose time has finally come. If that indeed turns out to be the case, it probably won’t be long before QLED panels become mainstream, in which case we’ll soon have yet another acronym to choose from when buying out next TV set. That being the case, lets get to know what QLED is and how it is different from OLED and other competing technologies.

As mentioned already, QLED is the acronym for ‘Quantum Dot Light Emitting Diode’ – a relatively new display technology being promoted by South Korean consumer electronics giant, Samsung. While Quantum Dot displays have been around for some time, Samsung actually coined the QLED acronym and trademarked it for use in its flagship smart TVs. As a display technology, QLEDs basically comprise of LCD panels that use “quantum dots” to produce better quality images. 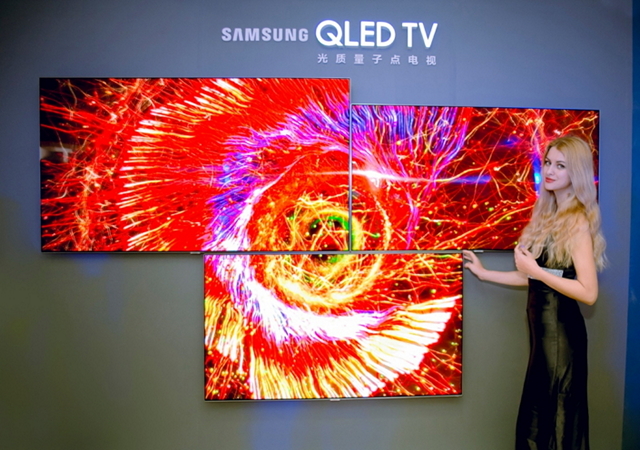 What are Quantum Dots and How Do They Improve Image Quality?

Quantum dots are phosphorescent semiconductor nanocrystals that can either emit or alter light at different frequencies when subjected to electrical energy. The commercially available QLED products right now only use quantum dots to convert or alter light, so unlike OLED panels, the QLED TVs of today still need LCD panels to do all the heavy lifting. The use of quantum dots, however, help LCD panels produce better contrasts and better viewing angles, although, the inherent problem of using a backlight is that native contrast ratios of these displays are unlikely to ever match up to that of OLED panels.

QLED vs OLED: The Things You Need to Know

Samsung claims that its QLED TVs offer higher brightness levels and darker black levels than other LED TVs, including OLED. The company also says that QLED panels can reproduce more colors than standard LED panels that don’t have quantum dots. While in theory, quantum dots can actually produce purer light than standard LEDs by acting as a filter for all the light coming from the LED backlighting, the claim that the QLED panels of today actually produces deeper black levels has been widely disputed. 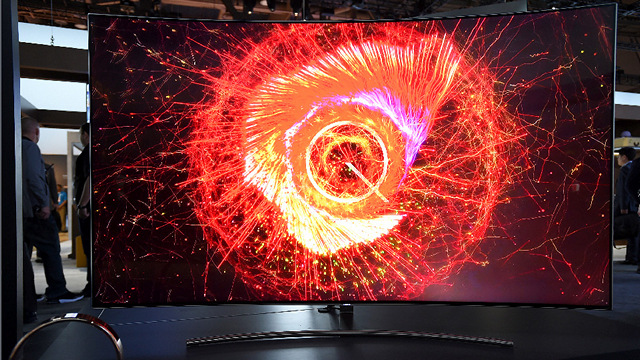 So while high contrast levels isn’t exactly its strong point, QLED TVs have a considerable advantage over OLEDs when it comes to brightness. LED panels have traditionally been pretty bright to begin with, and the addition of quantum dots only makes things better in that regard. These panels can actually make all the colors in the visible spectrum appear brighter without losing saturation. While OLEDs have traditionally been better in reproducing colors than bog-standard LED panels, the inclusion of quantum dots balances things out quite a bit in that regard because, by improving the purity of the backlight, the technology allows QLED panels to reproduce colors more accurately.

Viewing angle is another area of concern for QLED panels vis-a-vis their OLED counterparts. While things have improved significantly over the past couple years, QLED panels are still generally believed to have more luminescence degradation at higher viewing angles than OLED displays. However, QLEDs are unlikely to suffer from the phenomenon known as “burn-in”, which OLEDs are susceptible to, at least in theory. Burn-in happens when a static image (like a channel logo) is displayed way too long at the exact same spot, causing the pixels in that area to dim prematurely, giving the impression of an image that’s been, well, burned-in. 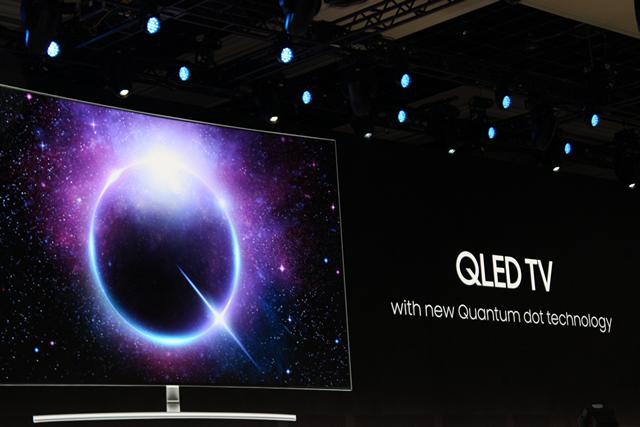 Power consumption is one area where OLEDs steal a march over QLEDs. Without the requirement of a backlight, OLED TVs are more power-efficient than QLED TVs. However, while OLEDs seem to be ever-so-slightly ahead of QLEDs right now in an overall head-to-head, Samsung could nonetheless be stealing a march over LG by pricing its products lower than those from its hometown rival. While both technologies are still prohibitively expensive for mainstream consumers, QLED TVs are consistently cheaper than their OLED counterparts.

While true QLED panels can someday be used in smartphones and tablets, the quantum dot-enhanced LCDs that are being marketed as QLEDs are restricted to large-screen TVs for the most part as of now. With the QLED acronym trademarked by Samsung to be used for its quantum dot TV lineup, the technology has appeared exclusively in the branding of the company’s premium television range up until now. However, earlier this year, the South Korean tech major announced that it had forged an alliance with Chinese tech companies Hisense and TCL to form the so-called ‘QLED alliance’ in an effort to make the technology a serious competitor to OLED, which is backed by LG Electronics. 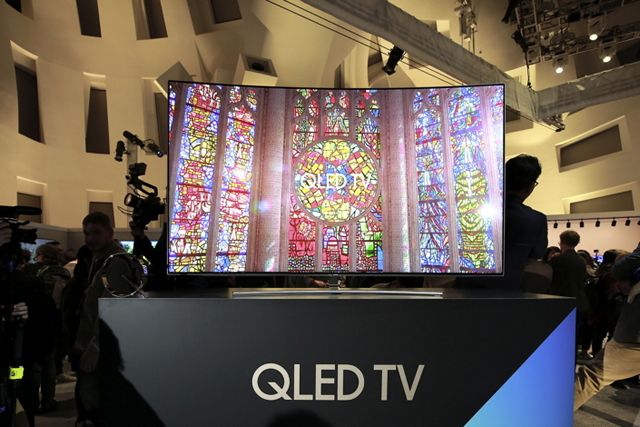 The announcement was made in Beijing back in May, and at the press conference, all three companies showed off a number of their upcoming QLED TVs. All of those TVs use a quantum dot filter instead of actually exploiting the phosphorescent value of quantum dots to get rid of the LCD panel altogether, which would have allowed them to circumvent some of the disadvantages inherent in LCD technology. Currently, the best QLED TVs you can buy include Samsung’s Q7, Q8 and Q9 lineups. Out of these, the Q7 and Q9 lines come with flat panels, while the Q8 screens have a concave curvature.

QLED is a premium display technology at the moment, and we might have to wait a few more years for it to trickle down to the mainstream. As mentioned earlier, if you’re looking to buy a QLED TV, you’ll have to be prepared to pay a premium for it. Samsung launched its first-generation QLED-branded lineup earlier this year at eye-popping prices, although, they still compare favorably to LG’s premium OLED lineup on the pricing front. 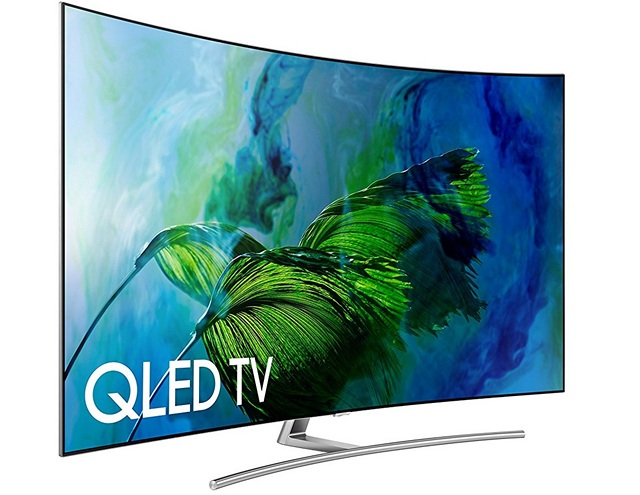 The lineup also boasts of an 88″ model that comes with an MSRP of $39,999, but is currently not listed on Amazon. As you can see, the larger TVs are still prohibitively expensive, so it will very likely be a while before these things become mainstream.

SEE ALSO: POLED vs OLED: What Are The Differences?

Are QLEDs The Way Forward?

It is difficult to say with any degree of certainty whether QLEDs are indeed the way forward for display panels, but for now, OLED panels seem to have a slight upper hand in most departments. However, many tech enthusiasts seem to believe that the real change in the industry will come with the advent of true quantum dot technology, which may well mitigate many of the issues faced by both the QLED and OLED technologies of today. It remains to be seen how all that pans out, but for now, the advent of QLED TVs can only be a good thing for consumers, who will very likely be the beneficiary of an all-out war between LG and Samsung to establish their respective products as the preeminent TV tech of the next decade.

So, now that you know about Samsung’s big plans with QLED, which display technology are you backing? Do you thing QLED will be able to give OLED a run for its money? Or do you think LG will be able to withstand Samsung’s onslaught and escape relatively unscathed? Do share your thoughts with us in the comment section below, because we love hearing from you.