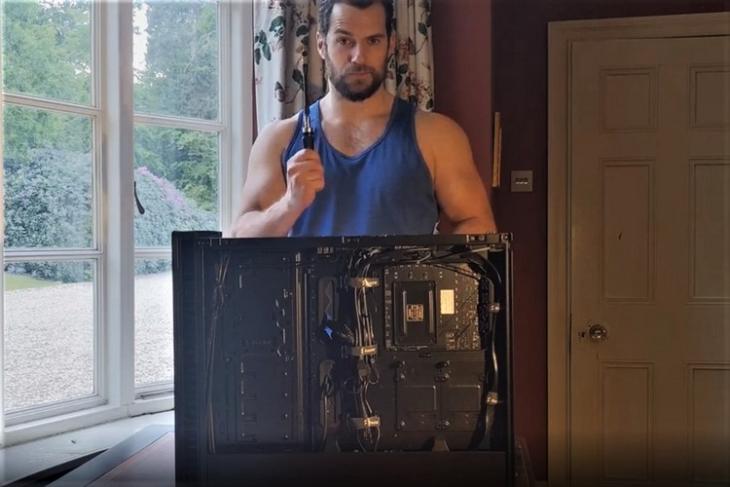 If you’re not a tech nerd like us here at Beebom, then you might find watching someone assemble a PC a rather dull affair. However, I am sure if that “someone” is the super hot and sexy Henry Cavill (yes, I am man-crushing), then you might wanna reconsider. So, let’s watch him build a custom gaming PC all by himself for “man-cave”.

But before we watch Henry perform the heavy-duty task with his muscular hands in a black tank top, let me tell you some things about the star. According to his previous interviews, apart from playing the role of the all-time favorite superhero, Superman and of course, “The Witcher”, Cavill is an avid gamer who likes “sitting alone in his man-cave playing PC games all day”.

So, as Coronavirus-led mandatory lockdowns have shut down or postponed film productions, Cavill is taking this free time to fulfill a promise he made to his fans last year: Build a custom gaming rig all by himself.

Now, recently the Witcher protagonist shared a 5-minute video on his IGTV handle. In the video, Cavill takes some pretty high-end components like a Ryzen CPU, some high-end gaming peripherals, and an Nvidia GeForce RTX 2080Ti and builds a custom gaming rig from scratch. Just take a look already!

So, considering you’re still reading this article and not stuck in a loop watching the star fit the components, I must say Cavill did a pretty amazing job with the rig. Now, he did mess up a tiny bit with the physical CPU/GPU monitor. However, seeing him first play his games before fixing the mistake the next day shows just how much he loves gaming.

According to his previous posts on Instagram, the star is a fan of the turn-based tactical video game, Total War: Warhammer II. In fact, when he is not playing the game, he makes these tiny “Warhammer” miniature models, which, I think, look pretty dope.