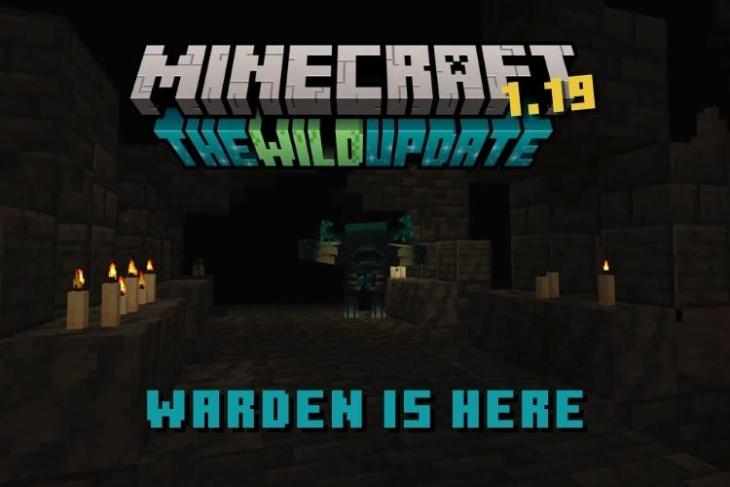 The day is finally here! Minecraft has just received its most anticipated mob of all time: the Warden. It’s scary, powerful, fast, and definitely dangerous. Once the complete Minecraft 1.19 update launches, Warden might become one the most powerful boss mob in the game for many players. But that’s not all. Along with Warden, we also received a ton of other stuff, including new biomes, new blocks, and a brand new enchantment in the latest snapshot. So, let’s not wait another moment and learn everything you need to know about the Warden and the deep dark.

The developers released the first Minecraft Bedrock 1.19 beta back in January 2022. Since then the Java edition players have been waiting for their share of good news, which arrived only today. Most of the features in the first snapshot, including the Warden and the deep dark, are exclusive to the Java edition. Bedrock players will have to wait for a week or two to get them in their beta program. Minecraft Preview users can expect to get these features alongside the Bedrock betas.

Note: As stated by the developers, everything from the structures to mobs is subject to change in the official release.

The Warden in Minecraft 1.19: Everything We Know

Warden is Minecraft’s first blind mob, and it is exclusive to the deep dark biome, which gives it plenty of one-sided advantages. Here’s everything we know about Minecraft’s scariest mob:

One of the main power moves of the Warden is the new darkness effect. As the name suggests, this effect lowers the gamma and brightness of Minecraft. Additionally, once affected, players also face extreme darkness every few seconds in which even the light sources go almost completely dark.

You can counter it with a Potion of Night Vision but even that is ineffective against the fog effect of darkness. With night vision, the blocks around you will be much brighter but you still won’t be able to see beyond your chunk. So, keeping multiple torches on you is your best bet.

Home to the Warden, the deep dark is a new biome of Minecraft 1.19. It is dimly lit and made up of mostly deep slate and sculk blocks. Other hostile mobs usually don’t spawn in this biome. This biome usually spawns below Y=-10 block height.

Within the deep dark resides the new structure called the ancient city. This location is similar to the nether fortress, but is a lot darker. You can find a variety of chests here, but all of them are guarded by sculk senors and shriekers that can summon the Warden in Minecraft. You can also find a new block called Reinforced Deepslate in this area. It’s an unbreakable block similar to the Bedrock and you can’t get it in survival game mode.

Last but not the least, we have a new addition to the Minecraft enchantments list. Related to the Warden, “swift sneak” is a boots enchantment that allows you to walk faster while crouching. You are still not as fast as the warden, but this improves your chances of survival. It has 3 levels and is exclusive to chests that spawn in ancient cities. Moreover, you can’t combine this enchantment with any other boots enchantment.

As the snapshot is an experimental one, you won’t get it automatically in your launcher. So, you have to download the update’s zip file from here. Then, you can unpack it in your Minecraft’s versions folder to install the snapshot. After that, you need to create a new installation in the launcher and select the “pending 1.19_deep_dark_experimental_snapshot-1” to run it. We are working on a brief guide to help you with the installation, so stay tuned.

Meet the Warden in Minecraft

The Wild update is getting closer than ever and we are all in for it. The other anticipated Minecraft 1.19 mob Allay should be around the corner too. But for now, are you excited or scared to meet the Warden in Minecraft? Tell us in the comments!

How to Find a Minecraft Stronghold

How to Find Coal in Minecraft