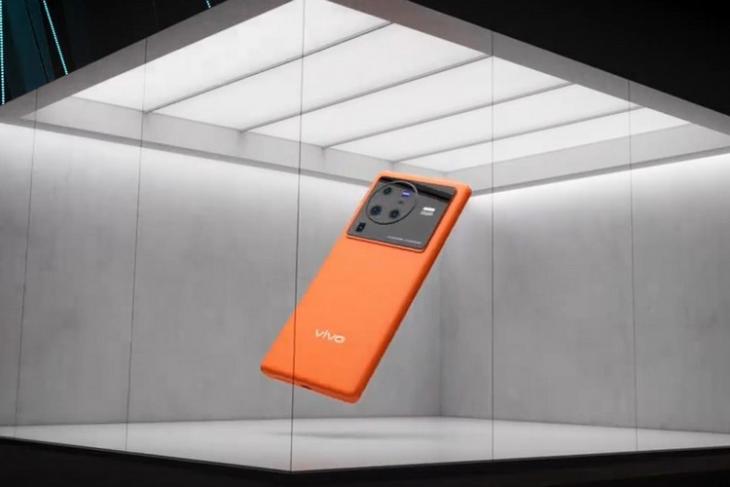 After launching its first-ever foldable device in China earlier this month, Vivo has now confirmed the launch of its latest flagship Vivo X80 series on April 25. The company recently took to the Chinese social platform Weibo to confirm the news and showcase the upcoming X80 Pro in a short video. So, let’s take a look at the details below.

Vivo will launch the X80 series in China on April 25 at 7 PM local time (4:30 PM IST). Although the company did not share many details about the upcoming devices, it did confirm that they will come with Zeiss T-coated cameras, similar to its predecessors.

The company also shared a short video, showcasing the Vivo X80 in all its glory. As per the video, the X80 will come with a leather-based back panel that is expected to come in three color options – Cyan blue, Orange, and Black. At the top of the back panel, there is a massive camera module (as opposed to what we saw with the Vivo X70 series), which shows a triple camera setup.

The Vivo X80 is expected to come with a primary 50MP Sony IMX866 lens with OIS, a 48MP ultra-wide lens, and a 12MP telephoto sensor with 2x optical zoom. The device is also said to feature a 32MP punch-hole selfie snapper at the front. Moreover, the teaser video shows that the device will come with a 4nm in-house V1+ imaging chipset to further enhance image processing.

The company is also expected to launch the Vivo X80 Pro, which is confirmed to be the first device to use the 50MP Samsung GN5 sensor, a 48MP ultra-wide lens, a 12MP telephoto lens, and an additional 8MP periscope camera. It could come in Snapdragon 8 Gen 1 and MediaTek Dimensity 9000 chipset variants.

There could be a Vivo X80 Pro+ model with the same design, but we don’t if it will launch on the same date. These devices are slated to sport a 6.78-inch AMOLED display with support for a 120Hz refresh rate. They will run the Android 12-based OriginOS Ocean in China.

Vivo S15e to Tag Along

Apart from launching the flagship X80 series, Vivo has also confirmed to launch a mid-ranger in the form of the Vivo S15e. The device is rumored to feature a 6.44-inch Full HD AMOLED display. It is expected to come with a 50MP primary rear camera, an 8MP ultra-wide lens, a 2MP macro sensor, and a 16MP teardrop-notched selfie shooter.

Under the hood, the Vivo S15e is to pack a Samsung Exynos 1080 SoC along with an integrated Mali-G78 MP10 GPU, paired with up to 12GB of LPDDR5 RAM and up to 256GB of internal storage. It is also rumored to pack a 4,700mAh battery with support for 66W fast charging.

Coming to details like price, availability, and more of the upcoming Vivo X80 series and the S15e, there’s no word as of now. However, if you are interested, stay tuned to our website to get details on the upcoming Vivo devices. Also, let us know your thoughts on them in the comments below.