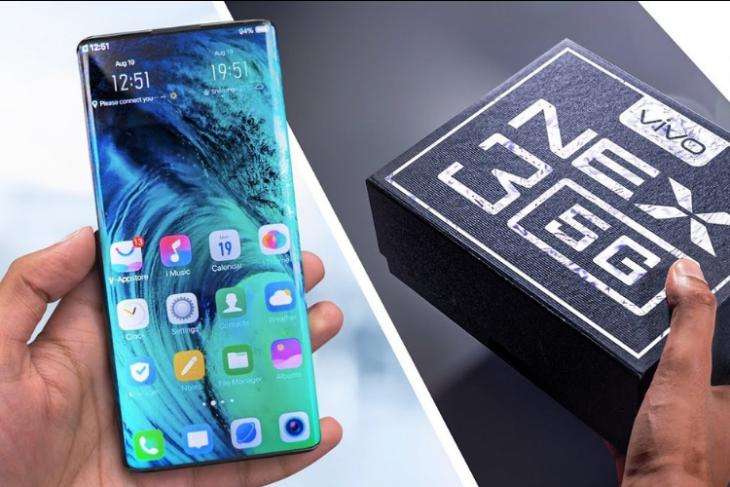 Vivo has officially revealed that its next NEX smartphone, the Vivo NEX 3 5G will launch sometime in September. Well, the launch now seems closer than ever as a new in-depth hands-on video for NEX 3 5G has appeared online today. It exposes the complete design, waterfall screen, triple camera setup, and much more.

The hands-on video has been uploaded by British YouTuber Arun Maini, better known as Mrwhosetheboss, who was also the first one to give us a close look at the Vivo NEX Dual Display Edition earlier this year. Maini unboxes the NEX 3 5G and gives us a good look at the device, confirming the leaks and rumors.

Right off the bat, you will notice the new waterfall screen that’s extremely curved on both the edges. Vivo NEX 3 5G is rumored to boast close to a 100% screen-to-body ratio but it seems like that won’t be the case. It would still be the highest among its peers, however, the minimal bezels all-around make us skeptical of the aforementioned claim.

The smartphone does not feature physical buttons, of course, because of the screen now spilling over the edges. Vivo is using the same pressure-sensitive buttons it was using in Vivo Apex 2019 prototype that we got our hands on for a brief time earlier this year. The headphone jack and USB Type-C port are still intact and no, this device is not port-less.

Vivo NEX 3 5G features a circular camera cutout with three lenses, which are in line with recent design sketch leaks. The smartphone shown in the video is a super pre-production prototype – with unfinalized hardware and software. That’s the reason Maini didn’t reveal and talk about the camera sensors, but we can expect it to be at least 48MP. The selfie camera sits inside a massive pop-up module, similar to the one we have seen on Vivo’s X27 Pro launched in China earlier this year.

Due to the pre-production nature of the Vivo NEX 3 unit shown in the video, numerous details for the smartphone haven’t been revealed. Most importantly, we don’t know if it comes equipped with a Snapdragon 855 or Snapdragon 855 Plus chipset. We also don’t know anything about the cameras, so stay tuned for the launch date. Also, more info on Vivo NEX 3 should start pouring in over the coming weeks.