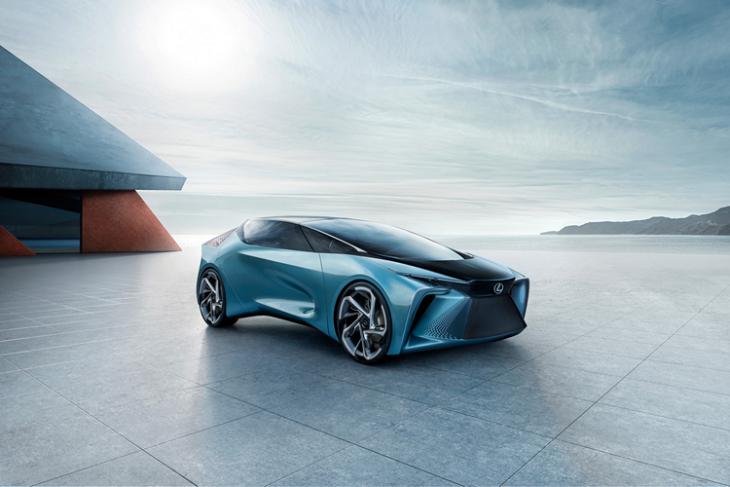 The LF-30 is a four-seater with a new cockpit designed to resemble a first-class seat on an aircraft. Toyota says that the opacity of the side windows can be freely adjusted, allowing passengers to control the opacity based on their preference.

The rear seats of the electric car use artificial muscle technology that molds according to the person and supports various modes like reclining and relaxation. In addition, the glass roof window called SkyGate uses AR to display information like “realistic star-filled sky, user-favorite videos, and even navigation”. Passengers can also interact with SkyGate using voice commands.

One of the key attractions of the Lexus LF-30 concept is the presence of drones. While we saw drones being used as headlights in Audi’s autonomous off-roader, drones are being used here to transport bags from doorstep to the vehicle’s luggage area. Cool, right?

The vehicle makes use of AI to identify the voices of vehicle occupants to adjust air temperature, audio, and driver settings based on the occupant’s preferences. Moreover, the vehicle understands the driver’s preferences and offers to control the suspension and powertrain in real-time based on the driving conditions for an efficient driving experience.

In the press release, Toyota has revealed some interesting numbers regarding the Lexus LF-30. The vehicle weighs 2,400 kg and has a range of 500km. It has a battery capacity of 110 kWh and a charging speed of 150 kW. The Japanese automaker claims that the vehicle will reach 0-100 km/h in 3.8 seconds with top speed being 200 km/h.

So, what do you think of the Lexus concept car? Tell us in the comments.

Toyota to Invest $500Mn in Uber in Self-Driving Car Deal