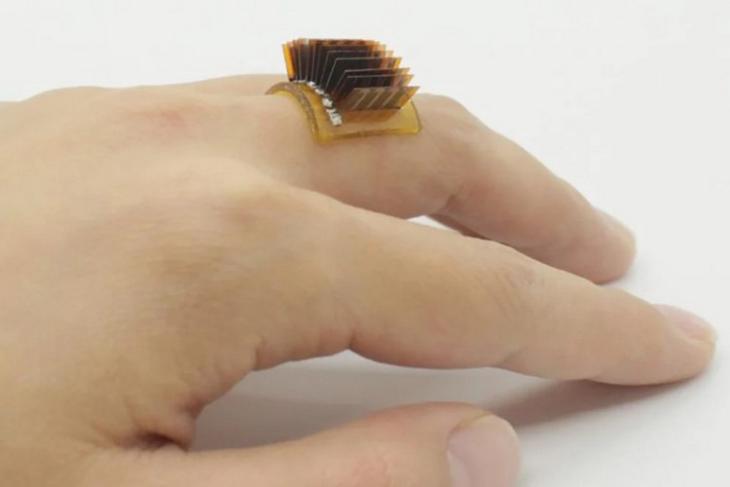 Over the past few years, we have seen a massive boom in the development of wearable technologies. Researchers and companies have come up with unique wearable devices. For instance, we saw Sony launch a wearable AC to beat the summer heat last year. And just recently, we saw a wearable that can inform an employer about his/ her employees’ moods and mental state. Now, researchers have come up with a tiny wearable device that can essentially turn a human body into a biological battery to juice up electronic devices.

Researchers from the University of Colorado Boulder developed a material that attaches to a human body in the form of a bracelet or a ring and converts body heat into electrical power. The researchers initiated their project based on the question – Can they convert the body heat of humans into electrical energy to power electronic devices? Turns out, they can do that using something called Thermoelectric Generators (TEGs).

TEGs are these small conversion catalysts that can turn the body heat of humans into electrical energy. These solid-state devices perform the task via a phenomenon dubbed the Seebeck effect.

Now, to put these on human skin, the researchers needed them to be stretchable and, more importantly flexible. So, using the TEGs, the research team came up with an appropriate device that a user can wear as a bracelet or a very techie ring.

This device, which is termed a Soft Motherboard-rigid plugin module (SOM-RIP), will attach to your skin and convert your body-heat into electrical energy to power small electronic devices.

“In the future, we want to be able to power your wearable electronics without having to include a battery,” said the senior author of the research paper, Jianliang Xiao.

Now, although the device is currently in its ideation and concept stage, the researchers think that it has a lot of potential going into the future. As of now, the concept devices are able to generate around 1 volt of energy from each square centimeter of the human skin. This, as per the researchers, can power small electronic devices such as a smartwatch or a fitness tracker.

Apart from converting body heat into electrical energy, Xiao’s TEG-based device can also heal itself when damaged and is completely recyclable. The team even made the device customizable as users will be able to connect smaller units of the device with each other to create a large structure with more power. Xiao compares this feature to the popular children’s toy Lego as it is like “putting together a bunch of small Lego pieces to make a large structure”.

The concept is currently in development at CU Boulder’s Paul M. Rady Department of Mechanical Engineering. The researchers shared the research paper on Science Advances recently. You can also check out an official video explainer for the tech right below.

Now, although it is in its very early stages, the team expects that their device would be commercially available in the market in the next 5-10 years. This way, we will not be needing any charging adapter or a wireless charger to juice up our electronic devices.

The LumiWatch Runs Android and Turns Your Arm Into A Touchscreen