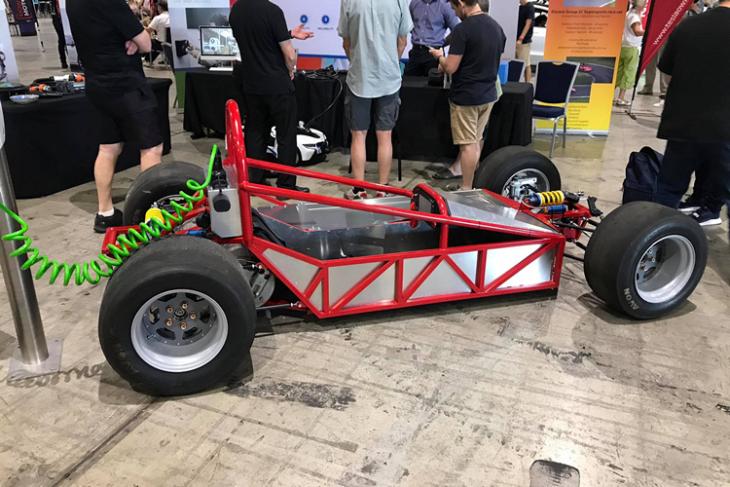 Ever imagined a blend of Tesla’s powerful motor and a go-kart? Well, Damian Butcher of Driftech Electric Racing sees the two as a perfect match and has built an electric race car powered by Tesla’s Large Drive Unit.

The vehicle weighs 450 kilograms and is capable of touching 603 horsepower (450KW). The electric race car was spotted at the Sydney EV Expo by YouTuber Bruno Bari Buccianti from the BrunoPOWEEER channel.

It is worth noting that the drive unit of the vehicle is mounted upside down as an attempt to improve the overall handling of the car. The batteries are placed on the left side of the vehicle and it balances out the driver’s weight on the right side.

“We’ve probably over-engineered it a little more than we needed to in the event that we end up doing normal track runs. It will spend most of its life racing in hill climbs, hence remove as much weight as we actually can,” Butcher told Buccianti in the video.

Butcher’s electric race car draws juice from a 400V LiPo battery. He mentions that the motor will draw only about half of the battery’s maximum continuous power and hence active cooling is not mandatory.

The battery box of the vehicle is made of stainless steel. This move is to control the fire in case things go wrong. There is also a slope on the box to make it easier to pour water to contain the fire. Quite thoughtful, indeed.

Notably, the vehicle was set up in just three weeks. For those wondering about the costs, Butcher mentions that he had spent about $100,000 to build the car. Well, at least we got to see this hybrid combination for that cost.