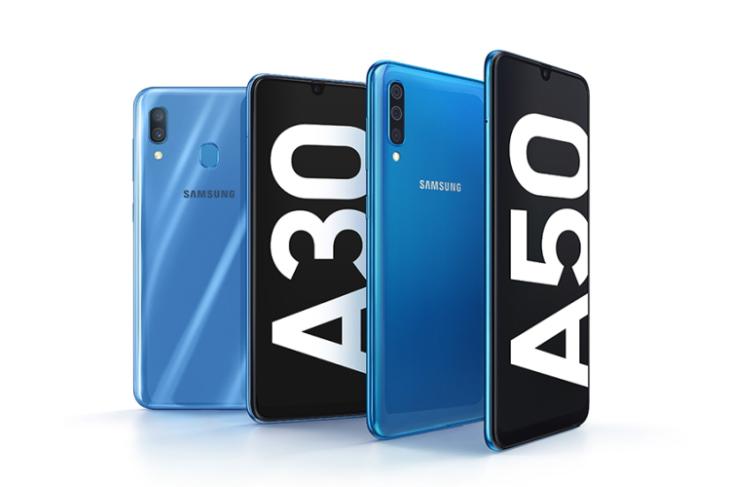 Much like we expected based on months of rumors, Samsung has revamped its Galaxy A series premium mid-rangers with the new Galaxy A30 and Galaxy A50 smartphones. Both phones were announced through press notes by the company without much fanfare.

With the Galaxy A Series, Samsung is also bringing features such as Samsung Health, Samsung Pay, Bixby Voice and more to the premium mid-range lineup.

Both phones are rather similar in terms of the key hardware specs. Both have a 6.4-inch full HD+ Super Amoled Display with the Infinity-U notch up top, containing the selfie camera. The look is not unlike the Galaxy M series which was launched earlier in India. Both the A30 and A50 have the same dimensions, a 3D ‘Glasstic’ design and the same 4,000 mAh battery too.

The A30 gets up to 4GB RAM and up to 64GB storage, while the A50 has an option for 6GB RAM and 128GB storage. Both have the option for expansion up to 512GB with a microSD card slot.

The Galaxy A50 also has an extra rear camera. Overall, it gets a 25MP main camera, a 5MP Depth lens, and an 8MP Ultra Wide lens. Paired with the ‘intelligent switch’ function, the camera can now identify and recommend when to use the Wide Shot mode. AI Camera helps you capture the best scene, with a Scene Optimizer feature to recognize and optimize 20 scenes, and Flaw Detection helps you get more perfect portrait shots. Both phones have Bixby Vision too, which is Samsung’s Google Lens alternative.

On the other hand, the A30 has dual cameras – a regular 16MP sensor along with a 5MP ultra wide-angle lens. The 25MP selfie camera on the A50 has a Selfie Focus feature to subtly blur background details. The A30 with its 16MP front camera also gets this feature. The selfie cameras enable Face Unlock on both phones.

Another area where the A50 differs is the on-screen fingerprint unlocking, whereas the A30 has a traditional scanner on the back.

Samsung has not announced pricing or availability for either of these phones.