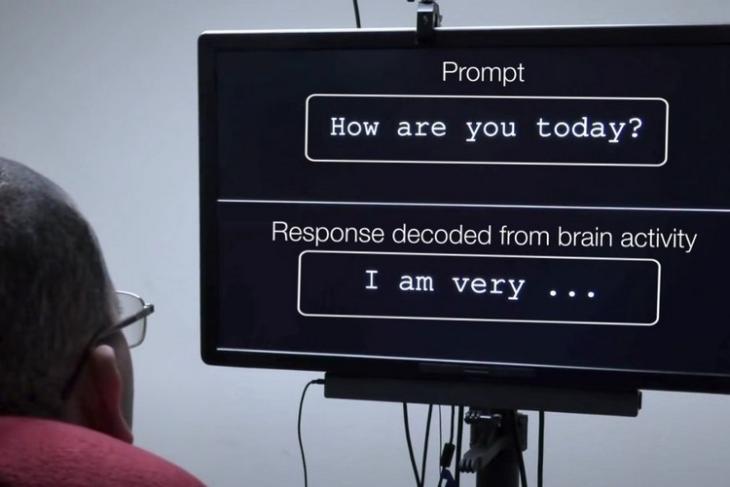 With more advancements in technology and neuroscience, researchers are now trying out various experiments to tap into the power of the human brain. So, a team of neuro-scientist at the University of California, San Francisco has now developed a system that enables a paralyzed individual without vocal capabilities to speak by reading their brain activity.

The system uses an electrode implant inside the brain of a paralyzed person to record their brain activity while they are trying to speak or answer a question. It then decodes the electrical signals from the brain to display full-formed sentences on a computer screen.

Now, if you are wondering, it is not as easy as it sounds. To test out the system, the researchers at the UCSF surgically implanted a high-density electrode array inside the speech motor cortex of a paralyzed man who is referred to as BRAVO1. Then, they connected the implant to a computer system via a port in his head.

Following this, the researchers spent 22 hours every day for several months to record the man’s brain activities while he tries to speak a list of 50 common words such as “good”, “family”, and “water”. After the recording session, custom neural network models were used to distinguish between neurological signals to detect and identify which words BRAVO1 was trying to say as he spoke.

The researcher then asked the participant to say various short sentences containing the learned words. The system then decoded the words from his neurological activities to display fully-formed sentences on a screen. Moreover, the researchers even conducted a question-answer session with BRAVO1 in which they asked him simple questions like “how are you?” As a response, the new brain-focused system displayed “I am very good” on the screen. You can check out the video of the experiment right below.

The team of researchers believes that this is the first time that a technological system has been able to decode the brain activity of a paralyzed man who can’t speak into full sentences. “It shows strong promise to restore communication by tapping into the brain’s natural speech machinery,” says Edward Chang, a neurosurgeon at the University of California, San Francisco.

Moreover, previous experiments of this sort used spelling-based or letter-based approaches. Chang’s team, on the other hand, uses a more natural aspect of speech to enable the system to work. “With speech, we normally communicate information at a very high rate, up to 150 or 200 words per minute. Going straight to words, as we are doing here, has great advantages because it’s closer to how we normally speak,” Chang further added.

Now, it is worth mentioning that although the new electrode-based system is more advanced than previous methods, it is not completely error-free. During the experiment on BRAVO1, the system was able to decode words with a median accuracy of 74% at 15 words per minute and went up to around 93% accuracy at 18 words per minute.

Going forward, the team at the UCSF will try to improve the system and increase its accuracy rate. Once completely developed, the researchers believe that the system could fully restore communication for several of those unfortunate people who have lost their ability to speak.