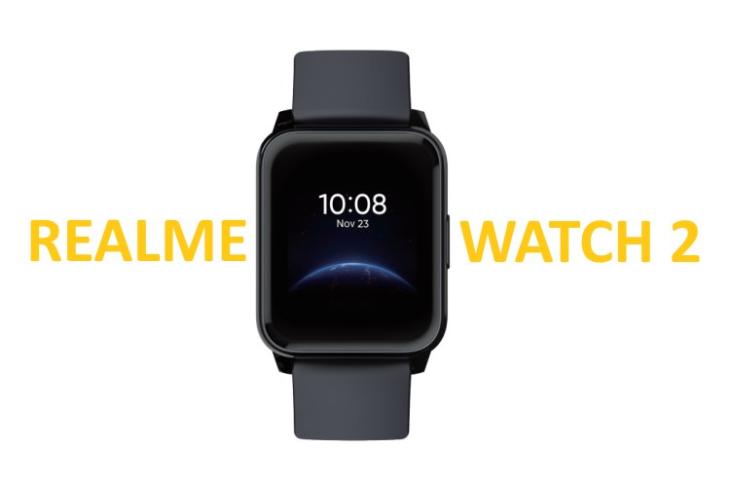 As per the FCC documents, the watch carries the model number RMW2008. It has the exact same design as its predecessor. You have a square-shaped dial with a button on the right edge. The strap now seems to have the company’s “Dare to Leap” motto engraved on it. Realme has already added the slogan to the rear panel of its flashy phones in the past.

As seen in the real-life image above, Realme Watch 2 will retain the square-shaped LCD display on the front. It appears to be the same touch screen with huge bezels all-around as its predecessor. The underneath has sensors for heart rate tracking, SpO2 (blood oxygen) monitoring, sleep tracking, and more. The watch will also support multiple sport modes, meditation mode, music controls, and notifications among other things.

The FCC listing includes the user manual for the Realme Watch 2 as well. It not only gives us a close look at the design (official render, pictured above) but also the entire specs sheet.

The Realme Watch 2 features the same 1.4-inch TFT display with a 320 x 320-pixel resolution as the original watch. It is bigger in size though and houses a massive 305mAh battery, which is almost double the battery size of the original.

You can check out the complete specs sheet for Realme Watch 2 right here:

Currently, there is no official word or leak for when the Realme Watch 2 will launch. It should arrive sometime later this year but it doesn’t bring any major upgrades over its predecessor. We will keep you updated on more details, so stay tuned.