Skip to content
Home News Realme Narzo 50A, Narzo 50i Launched in India Starting at Rs. 7,499 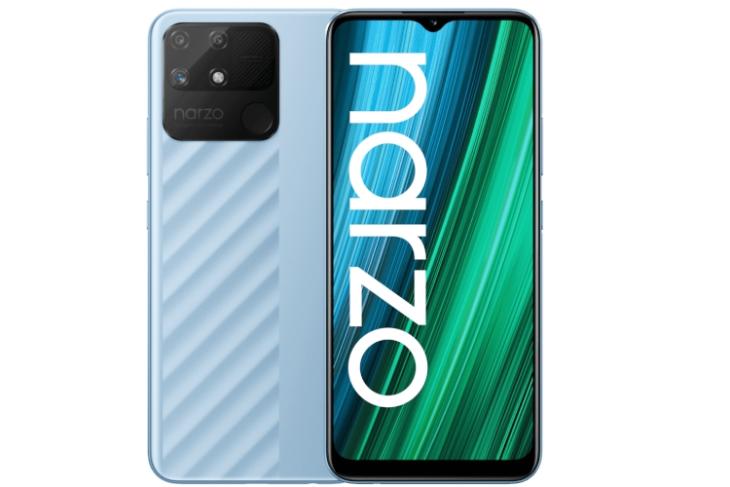 Realme Narzo 50A features a 6.5-inch HD+ display with 1600 x 720-pixel resolution and 400 nits of peak brightness (up to 570 nits in Sunlight mode). It runs on MediaTek’s 12nm octa-core Helio G85 chipset coupled with the Mali G52 GPU. The device offers 4GB of LPDDR4x RAM with 64GB or 128GB of storage. The storage can be expanded with a microSD card.

Narzo 50A packs a massive 6,000mAh battery that promises up to 8 hours of gaming or 27 hours of YouTube usage. The handset supports 18W fast charging and charges through a USB-C port. You also get reverse charging here in case you’d like to charge other smart devices.

In terms of software, the Narzo 50A runs on Realme UI 2.0 based on Android 11. The 3.5mm headphone jack is present on both devices.

Realme has also launched the budget-centric Narzo 50i at the event. It packs a 6.5-inch display with 1600 x 720-pixel resolution and 400 nits brightness. The device is available in two variants. You can choose the 2GB RAM variant with 32 GB of storage or the 4GB RAM variant with 64GB storage. It’s worth mentioning that you can expand the storage up to 256GB with a microSD card.

As far as the cameras are concerned, you get an 8MP primary camera with f/2.0 aperture and 4x digital zoom. The rear camera supports 1080p/30fps video recording. The selfie camera used here is a 5MP sensor with an f/2.2 aperture.

The device uses a 1.6GHz octa-core CPU with IMG8322 GPU. Realme has packed a 5000mAh battery on this one. However, the device charges with a micro-USB port. Much like Narzo 50A, the Narzo 50i supports reverse charging. The handset runs Realme UI Go Edition based on Android 11.