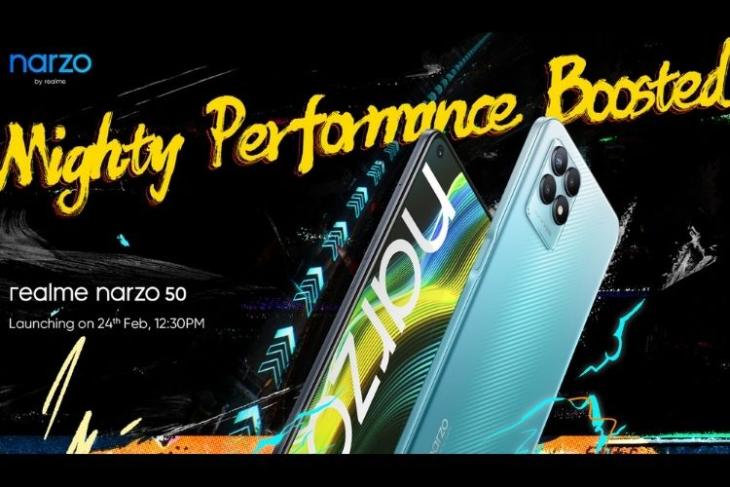 After a recent teaser, Realme has now revealed when it will launch the Narzo 50 in India. The smartphone, which will join the Narzo 50A and the Narzo 50i in the series, will launch in India on February 24. The company has also revealed the phone’s design and a few more details. Here’s a look at all of them.

The Realme Narzo 50 will be introduced via an online event scheduled for 12:30 pm. Much like every other launch event, this one will also be live-streamed via Realme’s YouTube channel, Facebook, and other social media platforms.

It is also revealed that the Narzo 50 will come with a rectangular rear camera bump with camera housings placed in the top left corner. The rear panel is textured with a Narzo branding in the bottom part. Upfront, there’s a punch-hole display. As per the invite image, the phone is painted in blue color but we can expect to see more at our disposal.

As for the specs, the Realme Narzo 50 is touted to have the “Best Processor & Display in the segment” and is confirmed to be powered by a MediaTek Helio G96 gaming chipset. We can expect it to come with fast charging capabilities and a long-lasting battery, however, exact details aren’t out yet.

That said, rumors suggest that the Narzo 50 will feature a 6.5-inch display that will support a 90Hz refresh rate. The phone is expected to house 50MP triple rear cameras, a 4,800mAh battery with support for 33W fast charging, and more. It is likely to come equipped with up to 8GB of RAM and 128GB of storage and run Realme UI 3.0 based on Android 12.

The Realme Narzo 50 price in India could fall under Rs 20,000 and will be available to buy via Amazon India. But, we still need concrete details to have a better idea. Hence, stay tuned to this space to know more.