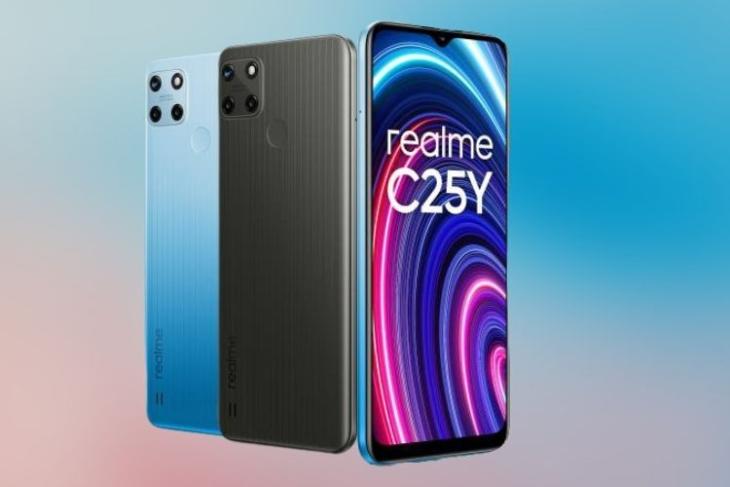 Following the launch of the Realme 8s 5G and Realme 8i, the Chinese giant Realme has now expanded its budget C-series in India. The company had launched three devices, including the C20, C21, and C25, under the C-series earlier this year. Today, Realme has unveiled an upgraded version of the C25 smartphone dubbed the Realme C25Y.

So, before going to the price and availability, let’s take a quick look at the key specs and features of the Realme C25Y.

Starting with the design, the Realme C25Y looks pretty similar to its predecessor in terms of design. However, the smartphone now comes with a textured back panel for improved grip, unlike the standard C25’s plain back. Nonetheless, the Realme C25Y also comes with the large Realme branding at the back, much like on the C25.

At the back, there is a triple-camera setup like the C25 model. However, instead of the primary 13MP sensor on the C25, the Realme C25Y is the first C-series smartphone from Realme to feature a 50MP primary lens. It lets users shoot 8160 x 6144p resolution pictures from the camera app. The device also includes a 2MP monochrome lens and a 2MP macro sensor. Moreover, there is a fingerprint sensor on the back panel for biometric authentication.

Under the hood, the Realme C25Y packs the Unisoc T610 chipset, which is a 12nm octa-core processor clocked at up to 1.8Ghz. The chipset also comes with an integrated ARM Mali-G52 GPU. It is paired with 4GB of RAM and 128GB of internal storage. Moreover, the device has a dedicated microSD slot to expand the storage to 256GB.

As for the battery, the Realme C25Y packs a massive 5,000mAh battery with support for 18W fast charging. It runs the Realme UI 2.0 based on Android 11 out-of-the-box and comes in two color options – Metal Grey and Glacier Blue.

Now, coming to the price and availability of the device, the Realme C25Y will sell for Rs. 11,999 in India. It will be exclusively available to buy on Flipkart soon.