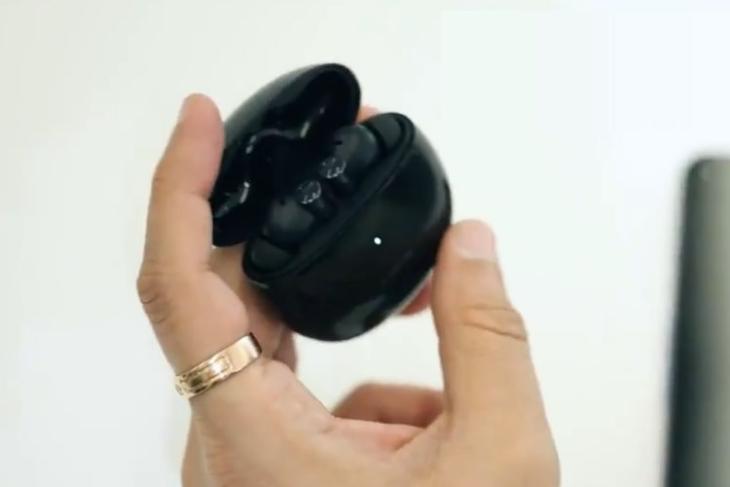 After launching the 5G-enabled Realme X7 and X7 Pro in India earlier this month, the Chinese giant is gearing up to update its Narzo lineup. It has been teasing the Narzo 30 device, its retail box, and now leaks suggest that it is launching on 24th February. Well, alongside the Realme Narzo 30 series, it looks like the company will also unveil a new pair of TWS earbuds – the Realme Buds Air 2.

Realme took to Twitter a couple of hours to show off its upcoming TWS earbuds. The company, at the end of the Realme X7 launch, said that the Realme Buds Air 2 TWS earbuds are “not too far”. And today, we have got a first official look at the earbuds in the video attached below.

You can see Realme CEO Madhav Sheth pop open the glossy black charging case and pull out the Buds Air 2. They have silicone tips, a redesigned stem with a flat circular top, and well, Active Noise Cancellation support. You can see Sheth play music, toggle ANC and Transparency Mode using touch gestures in the video.

Our CEO, @MadhavSheth1 is loving the noise-free experience on the upcoming ANC buds. Are you excited to turn the #NoiseOffrealmeOn? #DemocratizerOfANC https://t.co/CjIQ9lDdF7

In addition to the teaser, Realme has also published an explainer for ‘Active Noise Cancellation’ on its website and Flipkart. It has included a teaser image for these upcoming TWS earbuds with the text “Coming Soon”, as seen below. This further confirms that the earbuds will have silicone tips, a different stem design, and more.

Also, reliable tipster Ishan Agarwal recently tweeted about the Realme Buds Air 2. He revealed that Realme has partnered with American electronic DJ and production duo Chainsmokers for the earbuds. This will be the company’s second such partnership. It has already launched the Realme Buds Wireless tuned by Alan Walker.

Looks like realme is partnering up with The Chainsmokers for their upcoming TWS Earphones! Interested to see what will happen with them on board.

Apparently the slogan is "Noise Off" which means the product might feature ANC. #realme pic.twitter.com/MgOvehAbTy