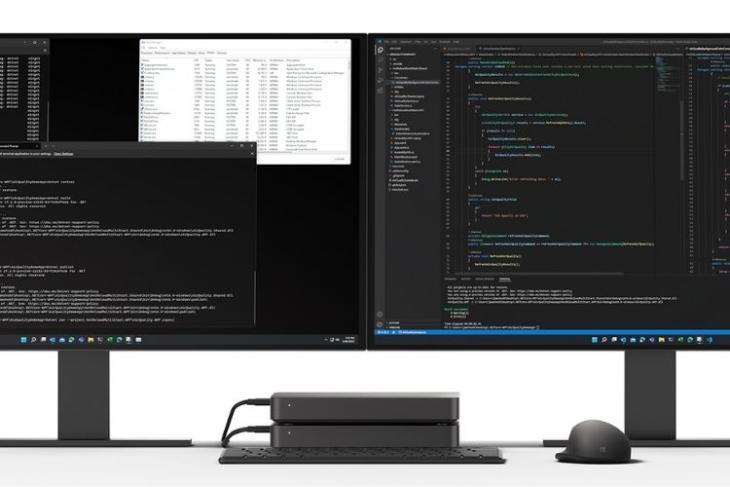 While we expected to learn the release date, along with the feature set, for the much-anticipated Windows 11 22H2 update, Microsoft seems to be looking forward to the future with a Windows for ARM announcement. Microsoft has released its first mini desktop PC (not under the Surface lineup) at the ongoing Build 2022 developer conference. The Redmond giant has partnered with Qualcomm to release a Windows 11 on ARM developer kit and is calling it Project Volterra.

Project Volterra, as explained by Microsoft, is designed to give developers the hardware and software platform to build apps for Windows on ARM. This mini desktop PC is powered by the Snapdragon compute platform. Microsoft has not shared many details about its specs, but it is said to have an announced Snapdragon chipset under the hood. As for the design, the developer kit (pictured in the header image) resembles the Mac Mini in shape and size.

More details will be shared over the next few months. But, Microsoft does reveal that the Neural Processing Unit (NPU) baked into ARM processors will enable developers to “explore many AI scenarios”. The company plans to make it easier for developers to leverage the AI capabilities enabled by the ARM processors by “baking support for NPUs into the end-to-end Windows platform,” as per the official blog post.

That’s not all, though. Microsoft has also announced an ARM-native developer toolchain, so developers can natively build and test their apps on ARM-enabled Windows machines. For this, Microsoft apps like Visual Studio 2022, VS Code, Windows Terminal, the Windows Subsystem for Linux (WSL), and the Windows Subsystem for Android (WSA) will soon run natively on ARM-based Windows PCs.

Furthermore, Qualcomm also has a part to play in this development. It has released a “Qualcomm Neural Processing SDK for Windows toolkit” to support the vision of app developers. The cross-platform app development beyond CPUs, and powered by the NPU and cloud services has been termed the “Hybrid Loop” by Microsoft CEO Satya Nadella at the Build 2022 event.

Finally, if you are looking to get your hands on Project Volterra, there’s bad news for you. We currently don’t know anything about its cost, release date, or other information important to app developers. So stay tuned, as we will share more details about Project Volterra as and when they are available.