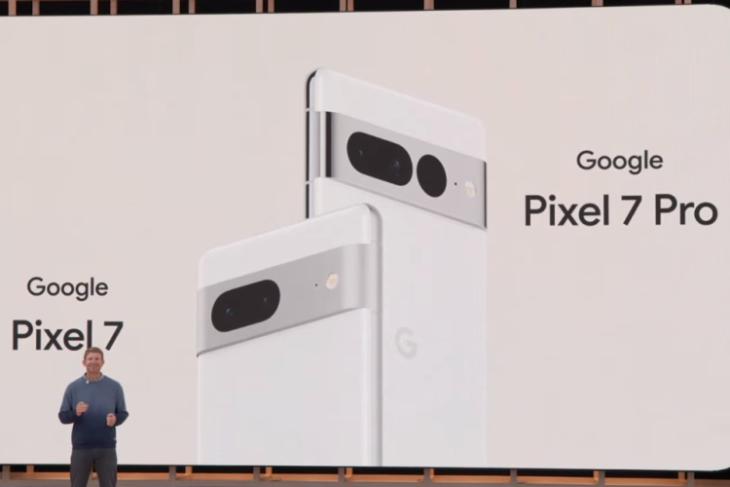 While Google showed off its upcoming Pixel 7 series during its I/O 2022 event earlier this month, the company is yet to reveal proper details regarding it. However, ahead of the official launch later this year, a Pixel 7 prototype has now been spotted on eBay. Check out the details below to find out more!

A Redditor named u/lucklouie spotted a listing of a Pixel 7 prototype, which recently went live on eBay. Although the Redditor merely shared the listing to the Google Pixel subreddit, the eBay seller who put up the listing goes by the name of meetveeru and is supposedly based out of Texas.

Now, coming to the details of the listing, the seller has provided an array of images of the Pixel 7 prototype on eBay, revealing the front of the device for the first time. The back panel has a new horizontal, matte-finish camera module and looks similar to what Google has teased. The front of the Pixel 7 prototype looks exactly like its predecessor, with a top-center punch hole and a non-curved design. At the back, there is an unspecified logo instead of the Google logo. This signifies that it is indeed a prototype device as Google tends to replace the back logo with a different logo in prototype units, much like Apple.

Another interesting detail that was spotted is that the seller was using a Pixel 7 Pro, presumably a prototype unit, to click the images for the listing. You can check out the reflection of the Pixel 7 Pro on the glossy back panel of the Pixel 7 in the image attached below.

Now, it is worth mentioning that the source of the listed Pixel 7 prototype is unknown. Furthermore, after the listing started garnering online attention, the seller decided to de-list the device shortly after. So now, if you go to the listing, you will see a message, stating that the “listing was ended by the seller because there was an error in the listing.”

Another High-End Pixel Device in Works?

Additionally, we have some details that hint at a new, mysterious Pixel device that could come with a 120Hz display. The report comes from 9to5Google, which also recently reported about the display details of the Pixel 7 and the 7 Pro and suggested that they are slated to sport the same display as the Pixel 6 devices.

In addition to this, information regarding display details of a new Pixel device, tagged as “G10,” was discovered in the Android Open Source Project (AOSP). This display, as per 9to5Google, will be made by the Chinese display manufacturers BOE and will come with support for a 120Hz refresh rate, a screen resolution of 1440 x 3120 pixels, and a physical size of 71 x 155mm.

The size and the display resolution of the above display hint that it would be a smartphone display rather than a tablet one. So this eliminates the possibility of it being the display for the upcoming Pixel Tablet. There are chances it could be another Pixel 7 or Pixel 6 phone but details are rather vague at the moment.

So, what do you think about this? Do you think that Google is working on an additional Pixel device at the moment other than the Pixel 7 and 7 Pro? Also, let us know your thoughts on the Pixel 7 prototype listing on eBay in the comments below.