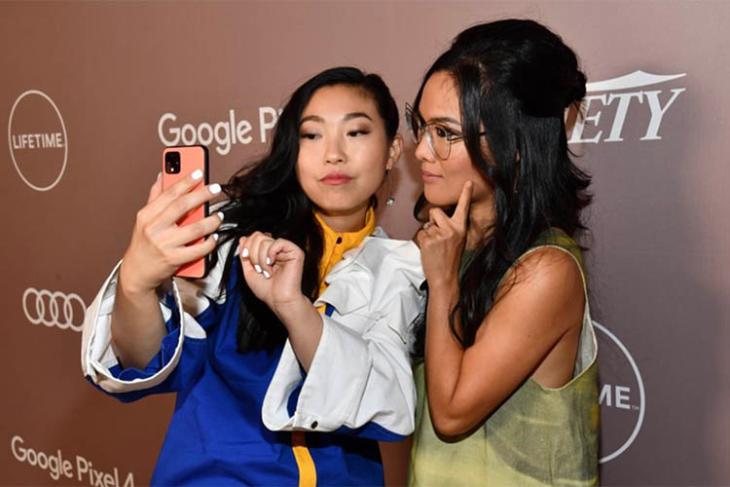 The upcoming Pixel 4 is going to be available in a new “Oh So Orange” colour variant, and while I’m not sure how I feel about the colour, reports surfacing online hint that it might be a limited edition colour variant for the phone. Google confirmed the existence of the colour via a huge billboard on Times Square, and now, the phone has made an appearance in front of the paparazzi.

Comedian Ali Wong recently posted a story on her Instagram page where she is seen posing with the rapper Awkwafina, who is holding the Oh So Orange Pixel 4 in her hand. Awkwafina is one of the people who also appeared in Google’s commercials for the Pixel 3a and Pixel 3a XL when they were launched earlier this year, so it makes sense that she’s one of the people who have early access to the phone.

The Variety event where this picture was posted from was also sponsored by Google Pixel 4 as the Mountain View giant ramps up advertising for its upcoming Android flagship (it’s launching tomorrow, for anyone who’s still unaware). As of this writing, the image is no longer visible on her Instagram story, or in any of her posts.

We basically know everything there is to know about the Pixel 4 and Pixel 4 XL. We know the specs, the colour variants, the design, there have even been leaks around the pricing of the phone, and it might be the first time that the phone starts at a $999 price tag, which could be a little bit of a shocker. That said, all that is based on leaks, so take it with a pinch of salt if you will. Either way, the phone launches tomorrow at 10AM ET (7:30PM IST) and we’ll be covering the launch live, so stay tuned.