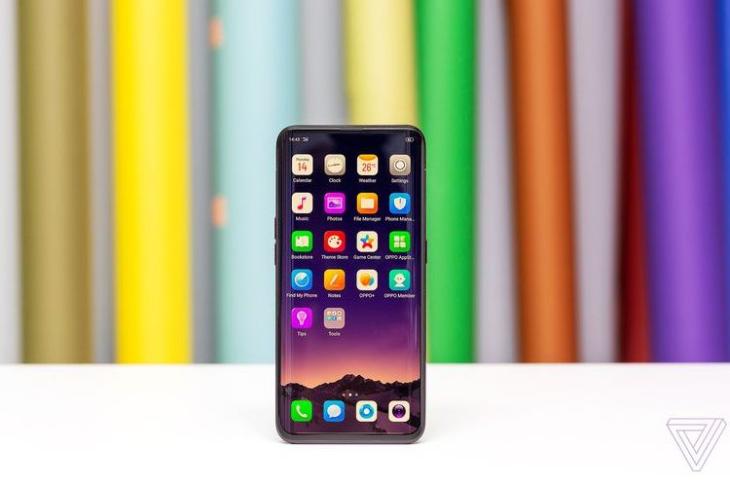 Hours before the official unveiling, we know everything about the Oppo Find X. Through our sources, we got our hands on the full official specs yesterday and today, The Verge has released a hands-on video of the phone ahead of the announcement event in Paris.

After the Vivo NEX earlier this month, it’s the turn of another BBK Electronics brand, Oppo, to ditch the notch and adopt a ‘true’ bezel-less display for its next-gen flagship smartphone, the Find X.

Apart from the stunning bezel-less display, the Find X also comes with a pop-up camera seen earlier on the NEX. However, unlike the Vivo device, where only the front-facing camera was put on a pop-up slider, the Find X has all three of its cameras placed mounted on retractable mechanism. The device, in case you didn’t know it already, comes with a dual-cam setup on the back and a single camera on the front. The phone also comes with 3D facial scanning technology.

To sum up all the hardware, here’s a quick look at the expected specs sheet of the Oppo Find X:

Another major difference between the all-new Oppo and Vivo flagships lie in the fingerprint scanner department. While the NEX comes with in-display fingerprint sensing technology, the Find X gives the option a miss entirely, opting instead, to rely on 3D Face recognition for like the iPhone X. The sensors needed for the hardware-based facial recognition also resides within the pop-up unit, allowing the company to retail a notch-less look on the front.

Once you get past the futuristic design, the Find X comes with all the high-end hardware that you’d expect from a 2018 flagship. That includes a 6.4-inch full-screen FHD+ OLED display that gives it a screen-to-body ratio of a whopping 92.25 percent. It is powered by the Snapdragon 845 SoC, has 8GB of RAM, and offers up to 256GB of storage. It comes with a 3,730mAh battery with support for the company’s proprietary VOOC fast-charging technology.

As mentioned already, imaging options on the Find X include a 16MP+20MP dual-cam setup on the back and a single 25MP shooter on the front. On the software side of things, the Find X runs Android 8.1 Oreo under Oppo’s custom ColorOS ROM. The device comes with a glass panel on the back, but there’s no wireless charging unlike many of the new flagships these days.

The device will be officially launched later today, which is when the exact pricing will be revealed. It will reportedly be available in China with immediate effect, and is tipped to be launched in India on July 12.